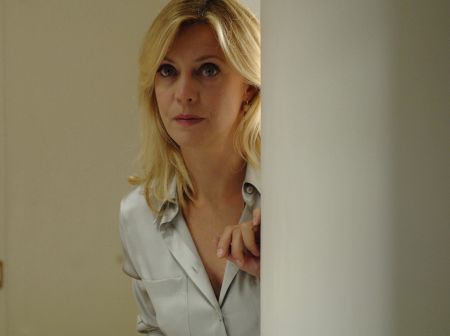 Margherita Buy is the face of the GASBI’s (Genitori Associati Spina Bifida) folic acid campaign to prevent spina bifida. She’s a mother of a little girl – her only child was born in 2001. She’s the former wife of actor/director Sergio Rubini who she worked with on 1990’s La Stazione (The Station). She’s won several Donatello awards (Italian Oscars) and Silver Ribbons from the Italian National Syndicate of Film Journalists. She is one of the best contemporary Italian actresses in film today. Let’s learn more about her – and her work.

Ms. Buy was born in Rome in January of 1962. She attended the Academy of Dramatic Art. After graduation, she began her career on the stage. Her breakthrough film role came in 1988. She played Vera in Daniele Luchetti’s Domani accadrÃƒ  (It’s Happening Tomorrow).

In 1990 she played Flavia. She walks into the life of Domenico (Sergio Rubini) just to buy a ticket from the station master. They come to mean so much more to each other. The film is poignant, beautiful and very romantic with a bit of jealousy – from Flavia’s fiancÃƒÂ©e – thrown in for good measure. For her portrayal, she won her first di Donatello for Migliore Attrice Protaganista (Best Actress) as well as her first Silver Ribbon.

In 1992 Margherita worked with another acclaimed director/actor, Carlo Verdone. They starred in Maledetto il giorno che t’ho incontrato (Damned the Day I Met You). Verdone’s character, Bernardo, is a rock journalist who goes into therapy while researching a bio of Jimi Hendrix. He meets a neurotic actress (Buy). This movie,winner of a Donatello award is definately worth watching if you like romantic comedies.

Throughout the remainder of the 90s, Ms. Buy appeared in many European films and on several television series including Arriva la bufera (1993), Fils prÃƒÂ©fÃƒÂ©rÃƒÂ©, Le (1994) Testimonio a rischio (1996) and Fuori dal mondo (1999). No matter what role she plays, Margherita brings a sensitivity and passion to each role she plays.

In the new millennium, Margherita’s career hasn’t slowed down. In fact, as she approached 40, an age which strikes fear in the heart of many in her professions, Margherita’s career has seemed to take quite an interesting turn. Since 2000 Margherita’s films have received more critical acclaim and more awards course those in Italy than they had throughout the sum of her earlier career. She is obviously an actress who’s comfortable in her skin and in her talent.

Margherita Buy for “Caterina in the big city”.

In 2001, the same year that her daughter was born, Le Fate Ignoranti (His Secret Life, The Ignorant Fairies) was released. She played Antonia, an AIDS doctor. When her husband is killed in a car accident, Antonia has trouble moving on with her life until she discovers that the man she had loved was not a man she even knew. He had a gay lover and a whole life she was never aware of. v Margherita’s performance was exquisite and emotional. It earned her nominations for a di Donatello, a European Film Audience Award and a Silver Ribbon in the category of Best Actress.

She would only take home the Silver Ribbon; but, this recognition would only pave the way for bigger and better film roles. In 2002 she worked with Cristina Comencini, one of her favorite directors to collaborate with, on Piu bel giorno della mia vita, Il (The Best Day of My Life). This film showcases the lives of a family as seen through the eyes of a little girl about to receive her first Communion. She starred with other renowned Italian actresses such as Virna Lisi and Sandra Ceccarelli and was able to stand out. This film earned her yet another Silver Ribbon, her third and the second in as many years.

In 2003 Margherita collaborated again with Carlo Verdone in Mal Che Colpa Abbiamo Noi (It’s Not Our Fault). She played Flavia, a woman who bought lots of shoes to soothe herself over the failings of her love affair with Aldo, a married man. That same year she would turn the world upside down with her portrayal of Agata Iacovoni in Caterina va in citta (Catherine in the Big City). She won a di Donatello as Best Supporting Actress and another Silver Ribbon for playing Catherine’s mother in this wickedly funny comedy that’s more than just a coming-of-age story.

Since then, Margherita has played Louise Maigret in a TV mystery series opposite Sergio Castellitto – he also played her husband in Catherine in the Big City. She’s done a giallo film that’s part comedy/part horror. It pokes fun of the TV industry. The film is called Siero della vanite , Il (The Vanity Serum). In 2005, she’s released two more films, Manuale d’ Amore (The Manual of Love) and Giorni dell’abbandano, I (The Days of Abandonment).

Margherita Buy’s career – like the actress herself – shows no signs of slowing down. Buy is a brilliant actress who continues to outshine her competition. She is comfortable in any genre who can work with equal comfort and success on the small screen as well as the big screen. Hopefully, she will continue to enthrall us with her performances, her grace, her beauty and her chameleon-like ability to become the characters she portrays.