The Bay of Naples is dominated by the infamous volcano Vesuvius; on the slopes below lay the remains of its most famous victims: Pompeii and Herculaneum. While Vesuvius occasionally takes its share of victims, the rich volcanic soil of Campania allows fruit, vegetables and grain to thrive. In this respect, the people of Campania have benefited much more to Vesuvius than have suffered from it.

Campania was settled by Greek immigrants in the 8th Century BC, forming the first colony of Magna Grecia at Cuma. Over the centuries, both the Etruscans and the Samnites occupied portions of Campania before being absorbed by Rome. Byzantine and Lombard armies fought each other for control of Campania, but in the end, most of the major areas including Naples and Benevento became independent city-states.

The coastal area of Amalfi became a maritime power during the middle ages and at the same time Norman adventurers arrived and took over much of Campania. These holdings would begin the 700-year history of the Kingdom of Naples, which went from French Norman hands to German Hohenstaufen back to the French Angevins before being acquired by the Spanish house of Aragon. The house of Bourbon held the Kingdom of Naples until the time of Napoleon when it was ruled by Joseph Bonaparte.

Garibaldi’s arrival in Naples in 1860 signaled the end of the Kingdom of Naples and the beginnings of the new Italian nation. Today Campania has a little bit of everything for the traveler, from trendy Capri and gorgeous Amalfi to the vibrant streets of Naples and historic sites like Pompeii and Paestum.

The food of Campania is in many ways the food of Italy. So many of the dishes that are native to Campania have been adopted by the rest of Italy, if not the world. Italian food would not be the same without Campania’s Spaghetti topped with Pommarola, the famous tomato sauce. Campania is also the birthplace of modern Pizza, with the world’s first Pizzeria (still in business) started on the streets of Naples. The cooks of Campania were the first to use tomatoes, debunking the once common myth of their deadliness. The volcanic soils of Campania grow some of the best produce in Italy, including the San Marzano tomatoes (PDO), whose deep red color and rich flavor are popular for making sauces. Campania is also known for its fruit orchards ranging from its famous peaches and grapes to apricots, figs, oranges, and lemons.

Campania’s most famous cheese is the Mozzarella di Bufala Campana (PDO), made from the milk of local water buffalos and gracing such favorites as Pizza Margherita and Insalata Caprese. Other popular cheeses include sheep’s milk Pecorino, Scamorza, Ricotta (both cow and buffalo versions), and Mascarpone. Parmigiano Reggiano has also found its way into the recipes of Campania, with meat and vegetable dishes served “alla Parmigiana”.

Seafood is a staple of Campania’s coastline with fish fried in olive oil a favorite of Naples, while other specialties make use of local octopus, cuttlefish, squid, clams, and mussels. Campania’s desserts range from local fresh fruit to honey-glazed Struffoli puffs to the famously decadent Zeppole, traditionally served on St. Joseph’s Day in March.

The wines of Campania have a truly ancient pedigree, with many types dating back to the early Greek colonists and praised by the Romans. Other varieties have been revamped with modern wine-making techniques, making Campania wines once again sought after outside of Italy. The standout red of Campania is Taurasi (DOCG); a dry aromatic wine that is best when aged and has not changed its character in two thousand years. The Vesuvio wines take on the traits of the rich soil from the slopes of the volcano and come in red, milder Rosso, and the fragrant Bianco varieties.

Also from the Vesuvius area is the cryptically named white, Lacryma Christi, or tears of Christ. However, the most famous wine of Campania is also the oldest, the Greco di Tufo (DOCG), which arrived with the first Greek settlers. There are several famous spirits that come from Campania including Capri’s Limoncello, made from the island’s thick-skinned lemons. Nucillo e Curti is a walnut-infused liqueur made in the Vesuvius area and prized as a digestivo. Benevento is the home of the golden herb-infused Strega, which often lends its flavor to desserts or is sipped after a meal.

Highlights of the region of Campania, Italy

The city of Naples occupies a spot so beautiful, with its wide blue bay and unbelievable sunsets that it is actually the second city built on the same spot. However, this “new city” is thousands of years old and has such a rich history that there are numerous world-class museums throughout the area. Naples is not just a city of history: it is known for its vibrant neighborhoods, colorful characters, and gritty exterior.

All of this is enhanced by a city full of excellent food and people dedicated to living life to the fullest. The reason Neapolitans live life with such gusto is perhaps due to the ever-present threat of the cone of Vesuvius and the reminders of such destruction in the remains of Pompeii and Herculaneum. So far, the city has been spared and supposedly protected by the blood miracle of San Gennaro. Twice a year Neapolitans fill the city Duomo to ensure that the saint’s blood liquefies in its vial – ensuring safety from a volcanic eruption. See also Naples for more on this magnificent city.

Once home to pirates and a powerful maritime republic, the Amalfi Coast and the island of Capri is today home to quaint villages, expensive yachts and a dramatic cliff-hanging highway. A trip south along the coast from Sorrento to Salerno should not be rushed, with a day spent on Capri among the quaint villages and idyllic scenery. The highway reveals breathtaking views and opportunities to visit fishing towns like Marina della Lobra, or trendy tourist spots like the cliff-face town of Positano.

Amalfi is also very popular with tourists and with good reason. This compact town, with its Arab/Norman-inspired Duomo and Amalfi’s red-tiled roofs, are a perfect complement to the natural scenery of green cliffs and blue water. Every town along the coast is worth at least a short visit, but the real attraction is the scenery and the hair-raising turns of the highway as it zigzags its way along the cliffs. See also Capri for more about the coastal town.

Benevento was once the Roman city of Beneventum, meaning a place of fair winds. The area has retained its character and ancient treasures in the face of battles, earthquakes, and the bombs of World War II. Benevento was built by recycling older building materials like Roman columns and milestones.

The 13th century Duomo of Benevento being just one example. Roman ruins abound with the Arch of Trajan in remarkable condition along with other vestiges such as the remains of the Roman theatre and baths. Benevento also has a good museum dedicated to the ancient Samnite peoples of Campania, located in the medieval cloister of the Santa Sofia Church. 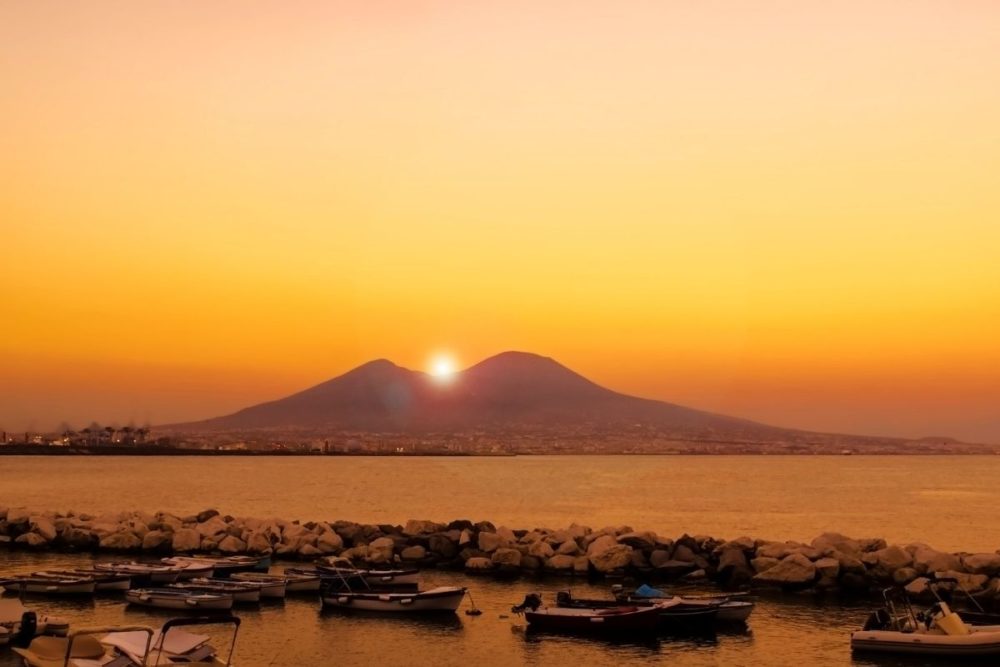 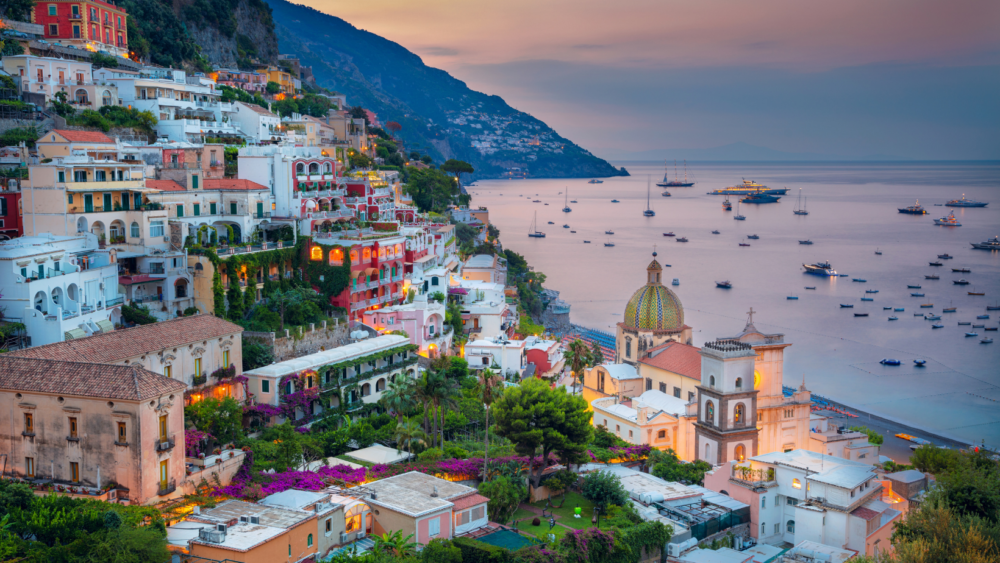 Things to do in Positano 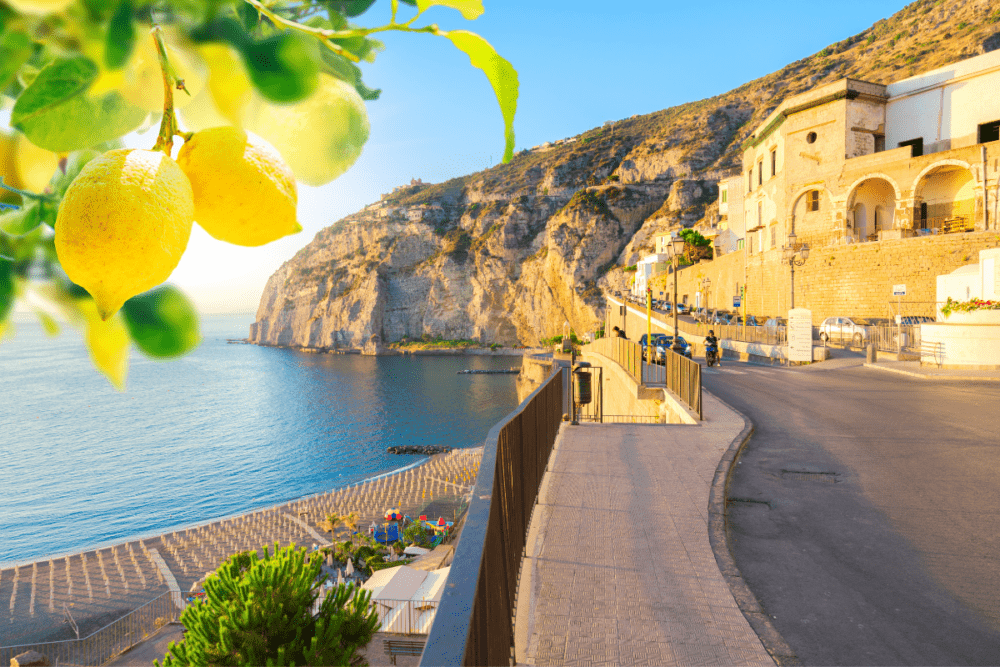 Things to do in Sorrento 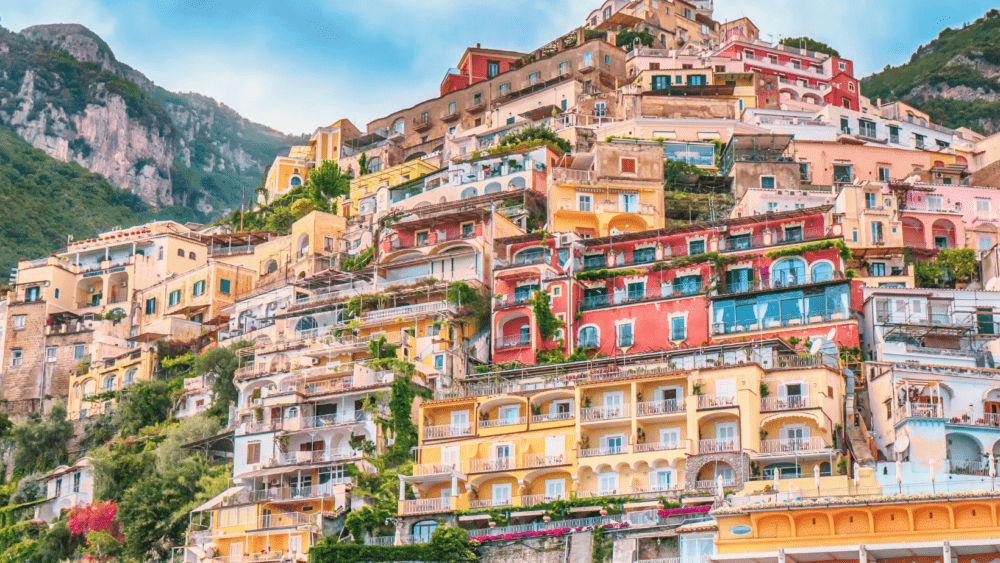 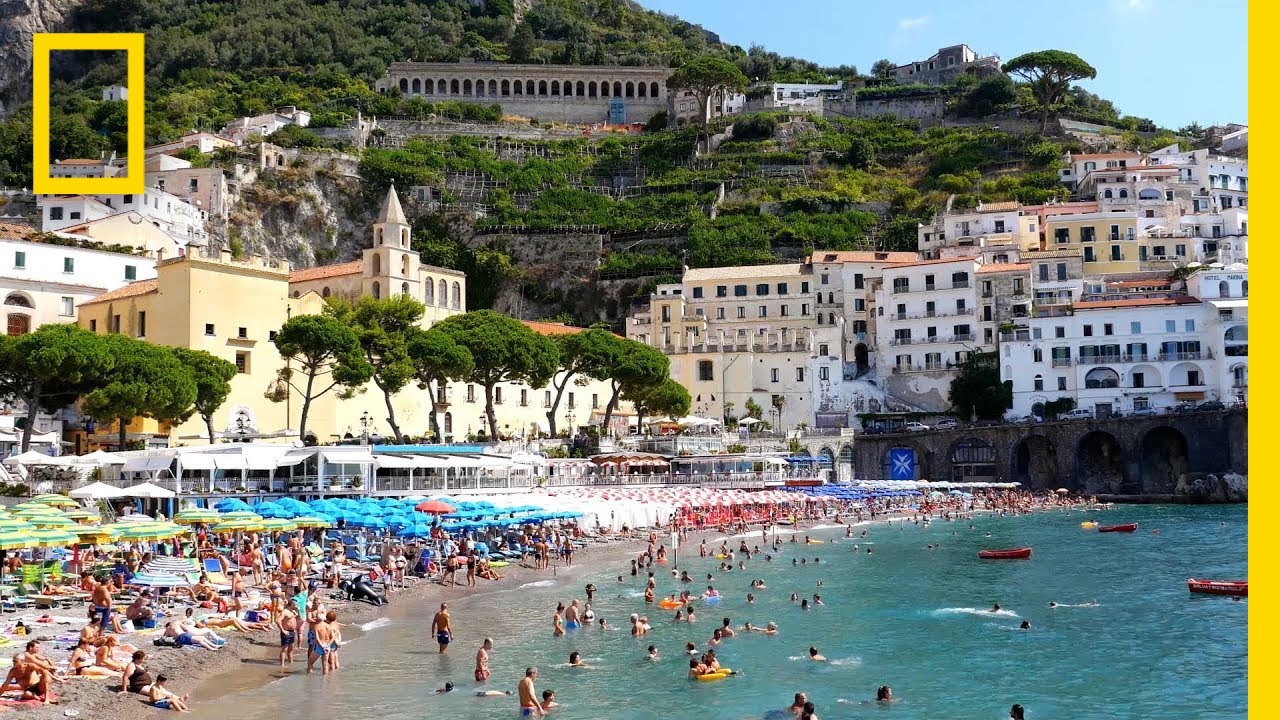 The National Geographic Shows Us Italy 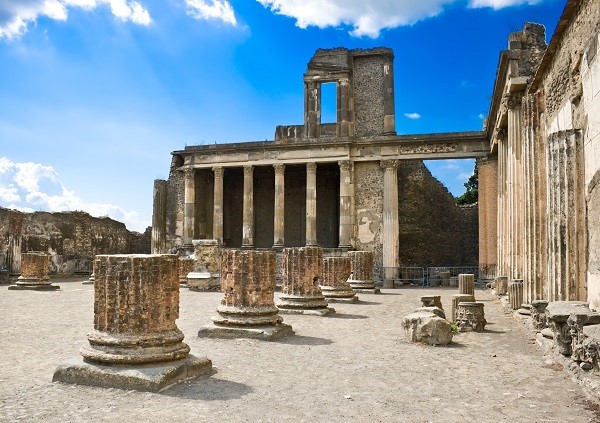 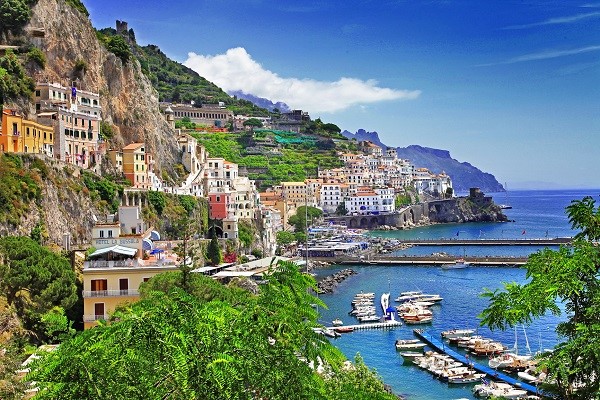 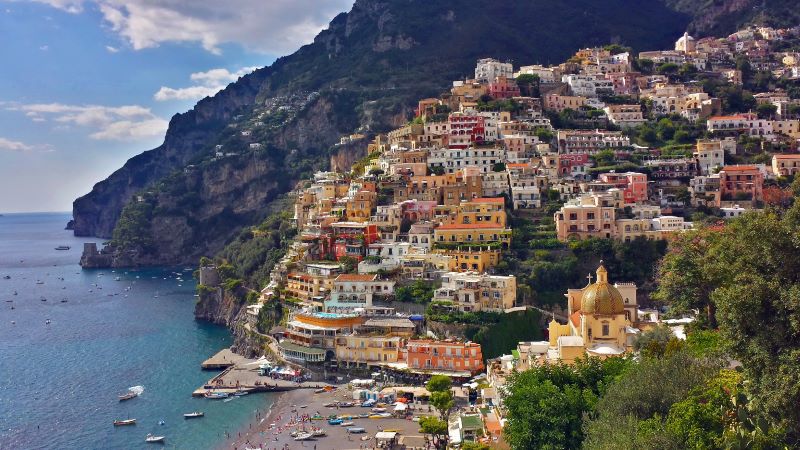 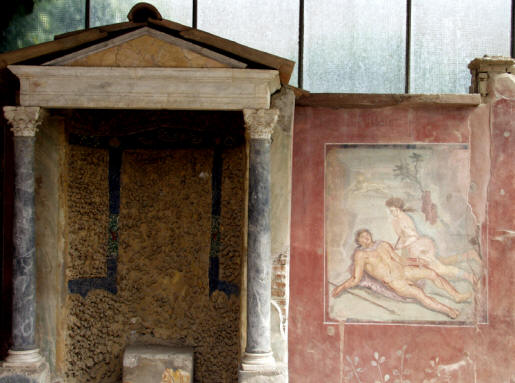 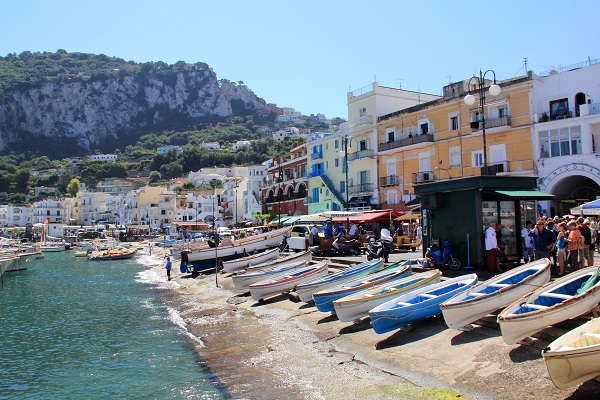