Prada began as a luggage brand, but emerged into the handbag market with its prima donna, Miuccia Prada, who shot into limelight with her simple, functional yet stylish nylon bags. With the distinctive triangular label, Prada nylon bags became very popular. They retain a healthy demand even today, and have been seen on stars like Kate Winslet.

But over the years, Prada bags have evolved and reached the stratosphere of designer handbags, becoming the “it” bags season after season. The Prada Lace Bowler has been seen on celebrities like Eva Mendes and Nicole Kidman, and is stunning in its fragile good looks and a sort of delicate simplicity. A bag like that is equally good on a posh evening out as a trip to the museum, or simply out shopping.

The Prada Fairy bag is another attention grabber, which has fascinated starlets and uber-cool fashionistas alike. The fairy print on this bag embodies the Prada of 2008 going into 2009, borrowing from the fantastic and fairy tale elements that Miuccia chose for her brand. This bag has a long waiting list and glamor goddesses across the world are tossing and turning in anticipation.

Another beauty from the Prada stable is the now iconic Prada Napa Gauffre Antic bag which has already been seen on Beckham, Halle Berry, Madonna and Beyonce, who have started off a craze for this roomy, cushy, super-glam bag. This is also available in the the frame version, as seen on Jessica Simpson.

Prada handbags are known for their lasting quality, the pockets and zip details, surprising combinations of hardware and soft leather, antique detailing and topstitches, unusual buckles and clasps, and classic designs. Miuccia Prada gets it right every time when it comes to what the “bag ladies” want. The Prada triangle commands respect not only because of the superior quality of handbags it adorns, but also because of their easy wearability with different outfits on different occasions, from casual cool to formal oomph.

The House of Gucci began in 1906 in much the same way as Prada, from a firm making leather goods, saddlery, and other leather products. It took the brand nearly forty years to become the handbag brand in vogue. In 1947, Gucci created the sack-like bag with rounded bamboo handles, which became an instant success.

The Gucci bamboo bags are fashionable even today, having entered the classical canons of fashion accessories. Each season Gucci does a new interpretation of the bamboo handle bags, which usually sell out quickly in shops like Neiman Marcus and Berf Goodman. Christina Ricci wears a version of a Bamboo handle bag in the picture below but the true Bamboo shapes are seen in the 2008 Cruise collection, featured here.

But the true renown of Gucci came with the Constance bags, with a hobo shape, double strap, and a big H clasp. Jacqueline Onnassis carried it and it became wildly popualar in the 60’s. Gucci renamed the bag the Jackie-O or more recently, the Gucci Bouvier bag, which is still seen as the mark of the truly stylish woman. In 2008, the New Jackie-O bag was a triumphant success.

Just like on the Gucci Bouvier monogrammed bag seen here, many Gucci handbag models feature a red and green stripe down their center and a metal Gucci logo. Monogrammed Gucci bags, especially the Gucci Boston are seen in all the fashion capitals of the world, sported by women for casual chic while traveling or shopping. Another famous Gucci Boston is the Horsebit version, seen above in plain nappa.

In the 1990’s, Tom Ford took over the creative direction of the brand. With a talent for reinvention, Ford came up with interpretations of the classic bag models with iconic clasps, belts, logos, and buckles, keeping the tradition yet creating wildly sexy bags in the ten years he ruled Gucci. The Horsebit hobo with its equestrian fittings was a clear winner from these times, and is now available in more than a dozen different versions. 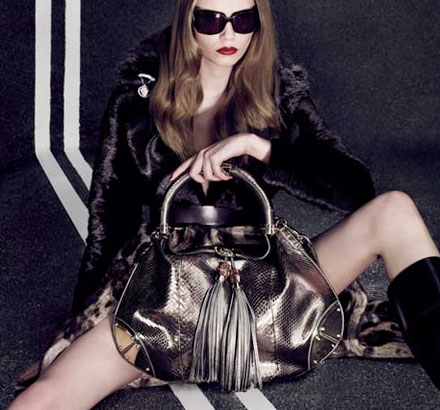 Keeping with this tradition, the present creative director Frida Giannini came up with the Gucci Indy bag and the Gucci Hysteria Bag, which have since been seen on many celeb shoulders, including Jennifer Lopez, Lindsay Lohan, Mischa Barton, and Kylie Minogue. These bags are available in various versions, from soft nappa to python and crocodile. Gucci designer handbags are meant for the sexy, flirty, uber-rich, in-control woman who is practical yet trendy every step of the way. For the not so rich, there is always the drooling over these celebrities, and going for bust by buying at least one of the Gucci handbag wonders.