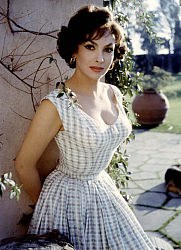 “A woman at 20 is like ice, at 30 she is warm and at 40 she is hot,” Italian actress, Gina Lollobrigida once said. (Thinkexist.com) Most men would think that the ‘Italian Sex Goddess’, famous for her sultry looks and curvaceous figure was hot at any age. The only one who she failed to capture was Rock Hudson who ‘fell asleep’ when they became intimate, she told television interviewer, Larry King. ‘It happens,’ Lollobrigida said.

The stunning actress, nicknamed ‘Lollo’, a French word meaning ‘beautiful breasts’, was born in Subiaco in 1927. She came from a working-class family and grew up during the time of Mussolini and The Second World War. She told Allessandra Mattanza of US Italia in December, 2005, that her memories of childhood Christmases were not happy ones. ‘Not very pleasant ones, unfortunately. I remember the war, the soldiers, the destroyed house. “I had no toys, we weren’t a rich family. The nicest Christmases came later.”  Lollobrigida’s career began when she won a beauty contest. She was ambitious to become an actress, although she also liked being an art student at the Academy of Fine Arts in Rome where she studied sculpture and painting. She won parts in many Italian movies during the early fifties, including Fan-Fan the Tulip (1951), Beauties of the Night (1952), Infidelity (1952) and was excellent in The Wayward Wife (1952). But it was as the fiery temptress, ‘Frisky’, in the trilogy which began with ‘Bread, Love and Dreams’ (1953) that the young actress leapt to stardom in a widely praised performance. This was the first of the romantic Italian neorealist movies, realistic movies set amongst the working class.

Her other famous movies included ‘Trapeze’ (1956), ‘The Law’ (1959) and ‘Come September’. The Americans loved her and featured her on many magazine covers, including Time, Life and Redbook. Rumors of rivalry with another very famous Italian actress, Sophia Loren, only fueled media interest.

Not all of her experiences in America were good, however. Humphrey Bogart was un-cooperative during the filming of ‘Beat the Devil’ (1953), directed by John Huston. He said that this was because he was not ‘a bosom man’ but he was also mean to Audrey Hepburn, who had a boyish figure.

Surprisingly, however, her international career never reached the heights that it should have. Lollobrigida decided to return to her first love: Art. She became a skilled photographer and published many collections of photos, including Italia Mia and Wonder of Innocence. When she took photos for Italia Mia she dressed in the grudge look of the 1990’s to disguise herself, but the workers of the Fiat plant in Turin and the Monofalcone shipyards recognized her and stopped production!

She also became an accomplished sculptress. Her interest in sculpture was renewed when she and her husband, Milko Scofic, had a son, Milko. (They divorced in 1971) However, her acting career took priority and she only started sculpting seriously after she finished acting. Many famous artists, such as Salvador Dali and Jacob Epstein, asked her to pose for them during her acting career, and she watched the way that they worked. This helped her very much when she decided to pursue her career in art. Lollobrigida was very successful, both as a photographer and a sculptress, and her work was displayed at many public exhibitions, including the State Pushkin Museum of Fine Arts in Moscow in 2003. Some of them can be seen at lollobrigida.com. “I studied painting and sculpting at school and became an actress by mistake,” she once said.

A woman of many parts, her many careers also include journalism; she famously interviewed Fidel Castro and working as an executive for cosmetics companies. The actress and artist has also worked for many charities. She especially likes to help children because of her poor childhood. The former actress also ran as a candidate for the European Parliament, but was unsuccessful.

Independent and feisty, Gina Lollobrigida had many romances. Men who are rumored to have been her lovers include Yul Brunner and heart surgeon, Dr. Christian Barnard. However, she doesn’t think that it is necessary for a woman to have a man. Feminists would approve of this famous quote of the former actress. “Some women like to depend on a man; I don’t want to depend on anybody. I just want my life to be based just on myself.”

(ANSA) – Rome, October 20 – Gina Lollobrigida, the Italian movie icon whose sultry looks thrilled male cinema audiences in the 1960s, has shown she still has what it takes to get her man four decades later. The 79-year-old actress, once tagged The Most Beautiful Woman in the World, has confirmed that in November she will marry a man 34 years her junior. The groom-in-waiting is Javier Rigau Rifols, a Spanish property entrepreneur from Barcelona, whom she claims to have known for 22 years, ever since they met at Monte Carlo. “He’s young, fun-loving, intelligent. We have a good time together. We don’t feel the age difference,” she told Italian television news. Lollobrigida, better known to Italians as ‘La Lollo’, said she would be getting married in America where there was likely to be more chance of escaping the paparazzi. “I’ll be wearing a dress by an Italian designer, but it won’t be white,” she said. A sloe-eyed, buxom brunette, La Lollo long vied with fellow Italian bombshell Sophia Loren and French sex kitten Brigitte Bardot for the title of the world’s sexiest woman. She even starred in a 1955 film called La Donna Piu Bella del Mondo (The World’s Most Beautiful Woman), which became her signature movie. The daughter of a furniture manufacturer from a mountain village near Rome, she has made over 60 films including some during the 1990s. Lollobrigida’s Hollywood breakout role came in the John Huston film Beat the Devil (1953). In 1961 she won a Golden Globe with Come September co-starring Rock Hudson. With her earthy good looks she embodied the prototype of Italian beauty. Her distinctive short hairdo was especially influential. It quickly spread across Italy in the sixties and was referred to as the “lollo”. Since retiring from cinema Lollobrigida has tried her hand as a photographer, sculptor, photojournalist and a fashion and cosmetics executive. Seven years ago she stood unsuccessfully for the European Parliament. Rigau will be her second husband. The diva was divorced in 1971 after a 22-year marriage to a Yugoslav doctor, by whom she had a son “I’ve had many lovers and still have romances. I am very spoiled. All my life, I’ve had too many admirers,” she said in an interview six years ago.