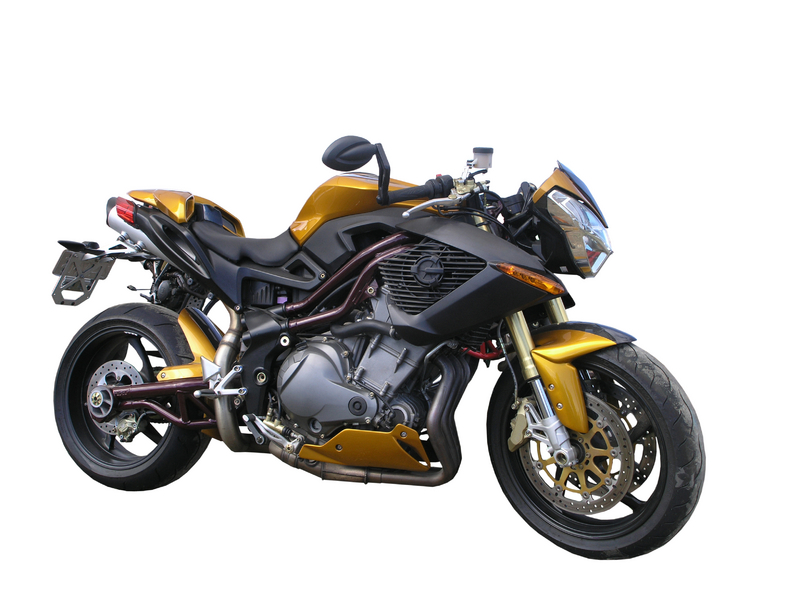 Benelli is probably not as well known as many other Italian motorcycle manufacturers, at least not outside of Europe at the present. That is where most of them are sold as the company has few large-scale distributors outside of the continent. There are some very good ones out there which are incredibly helpful and attentive, but you have to work to find them.

However, those who are familiar with Benelli know the quality, beauty and extreme attention to detail present in every motorcycle produced in the company’s Pesaro, Italy, factory. They will also tell you how quirky Benellis can be; just a little off-center and different than most other manufacturers from anywhere in the world. Though, this most certainly does not mean that Benelli produces anything other than excellent, well-made, beautiful and fast motorcycles! What is that, a quad-fecta?

It all started back in Pesaro in 1911 by a very forward-thinking and exceedingly bright woman. Her name was Teresa Benelli and she created the company to help give stable work to her sons: Giuseppe, Giovanni, Francesco, Filippo, Domenico and Antonio (“Tonino”). Right there at the beginning it started as a simple automobile and motorcycle repair shop. They took in local vehicles and did repairs and tuning work on them for people in their town and throughout Italy. Given the period – the early 20th century – many of the parts which were needed for the repair work had to be made by the Benelli Garage. There was no FedEx or UPS back then, so they could not order and then wait for whatever part they needed to be shipped in from abroad. Instead, they built them by hand and installed them at their location. They had a reputation as a very good maintenance and repair business and it grew quickly with each passing year. 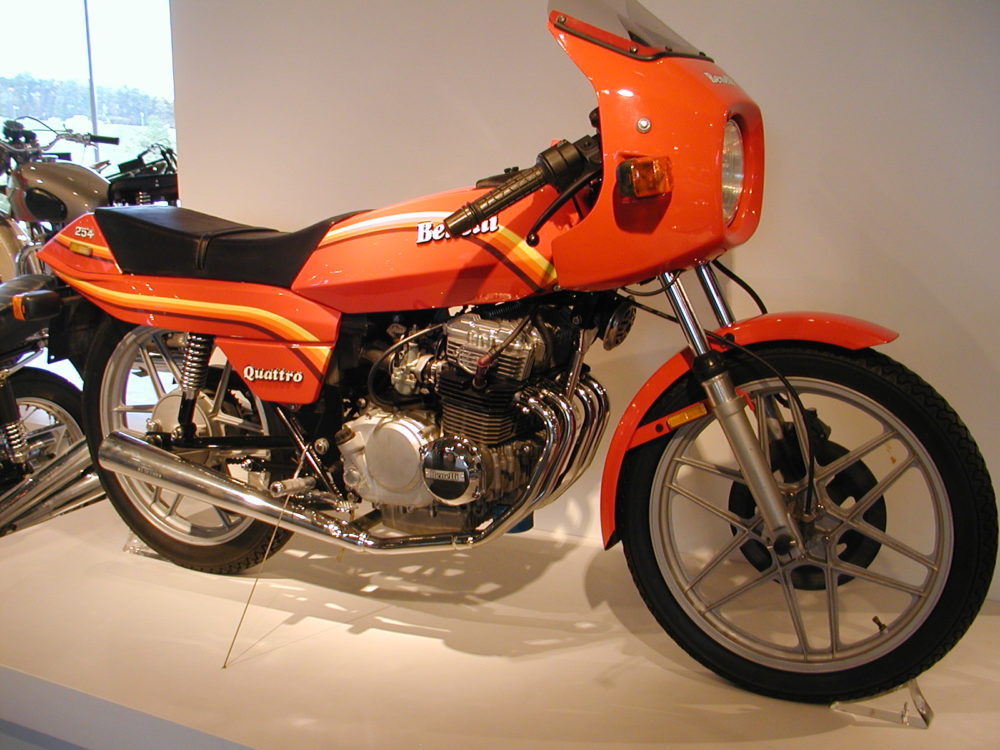 By 1920, though, they had decided to build their own engine in-house. They did just that by manufacturing a 75c.c. two-stroke single which was used to power a bicycle. It sold relatively well. Their success drove them to produce their first complete motorcycle, again built in their shop. Only a year later they – in 1921 – Benelli produced a 98c.c. two-stroke road-going motorcycle. The high level of quality, attention to detail and performance eventually, as it often does, led them into the racing world with this model. In 1923, Benelli built a competition-spec motorcycle based on that 98c.c. machine. Young Tonino “the terrible” took this bike to the track and proved that he was a worthy competitor and that Benelli could produce great racing motorcycles – their bikes were fast and reliable.

After a few years racing in local series, Tonino Benelli took a Benelli 175 racing in the Italian national championship. He took home four championships in five years. In 1927, 1928 and 1930, the 175 was a single-overhead cam design, but in the 1931 championship, he brought a double-overhead cam 175c.c. race machine to victory. This cemented Benelli in the minds of Italian race fans all over the country and the many people from around Europe who paid close attention to motorcycle racing. Unfortunately, the skills of Tonino could not keep him completely free of harm; he crashed hard in 1932 and never returned to racing. He died in a road accident about five years later and his family and fans mourned his death. 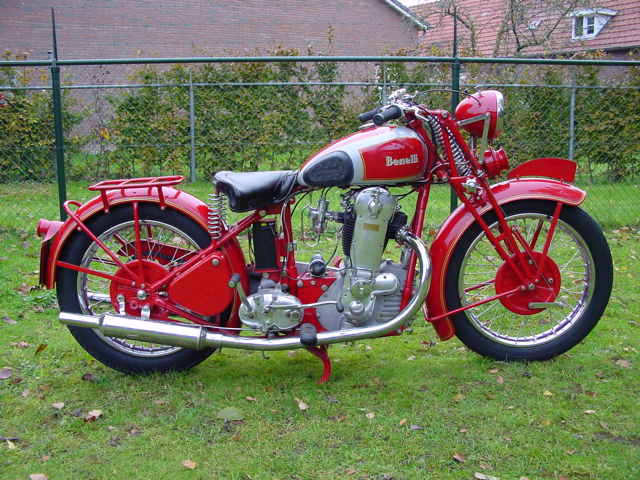 Just two years later, in 1939, Benelli created a four-cylinder supercharged 250c.c. motorcycle for racing in the 1940 season. That year had also seen them compete in the world-famous Isle of Man TT and win in the Lightweight TT race on their previous generation quarter-liter machine with rider Ted Mellors. At the time, the TT was considered the most important motorcycle race in the world. (It is where Soichiro Honda decided to take his new machines in the late 1950’s in order to prove Honda motorcycles could compete in the world market.) The new machine was to be even more powerful and lighter. However, the Benelli Four, as the supercharged 250c.c. bike was called, only managed to compete in a few Italian races. World War II had begun and motorcycle racing was far off of everyone’s priority lists until the conflict was over and life again needed the lure of racing for trophies and championships.

It took until 1949 for Benelli to get back to production due to the incredible damage done to the Italian factories during the war. Given the state of production and materials, the only motorcycles Benelli could manufacture were pre-war models or models based on them. Also during this time, brother Giuseppe Benelli left the company to found the Motobi marque elsewhere in Italy. (Motobi was brought into the Benelli company fold in 1962.) 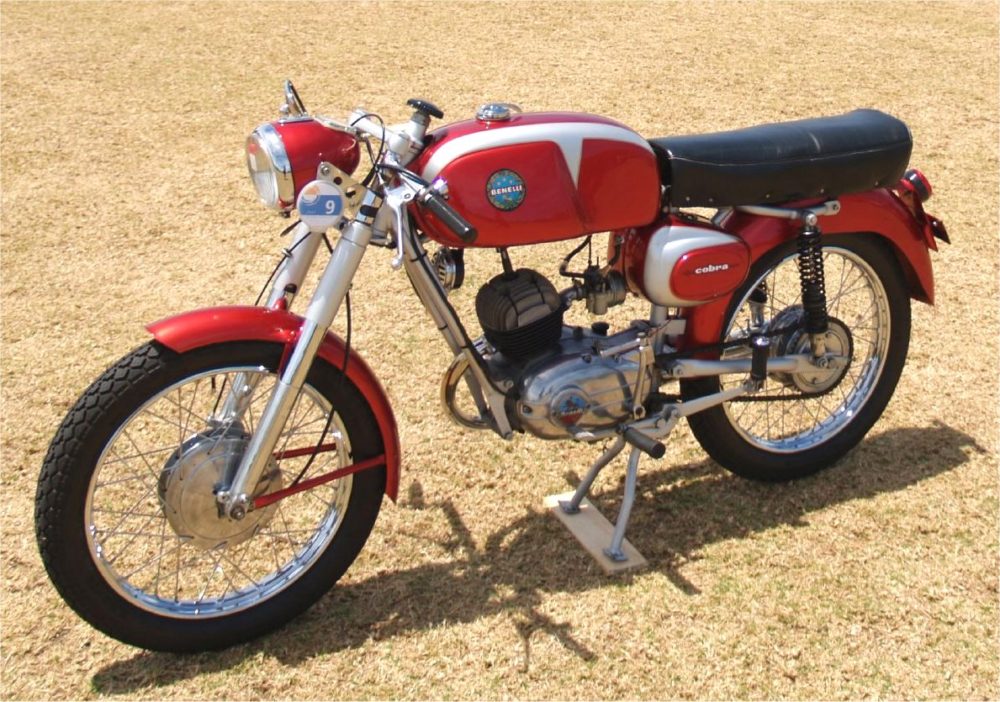 Finally, by the 1951 model year, Benelli had a significant range of motorcycles for sale. Their displacements ranged from 98 to 125c.c. lightweight bikes all the way up to 350 and 500c.c. single-cylinders. One model of lightweight motorcycle was the Leoncino; it was a 125c.c. two-stroke which was also available with a four-stroke engine. In fact, due to the war, lightweight and inexpensive transport was in high demand in Italy and elsewhere in Europe. And, at this time, all Italian manufacturers were making such bikes and the public was buying them as fast as they could be produced. Vespa and Lambretta made a real name for themselves during this era, but Benelli was right there with them.

Concurrent with the sales successes, the racing side of the company was doing quite well as racing again became socially acceptable a few years after the war. Thus, a Benelli racer brought even more recognition to the factory. Dario Ambrosini began racing for the family in 1949 in the 250c.c. World Championship. That year he came in second place overall, demonstrating the motorcycle’s worthiness and his ability to ride it rather well. The next year he managed to win both the Isle of Man Lightweight TT (250c.c.) and the 250 World Championship. Unfortunately, like some gifted and tragic racers of the time, he was killed on the track during practice for the French Grand Prix in 1951; even though, he finished the season in third place. 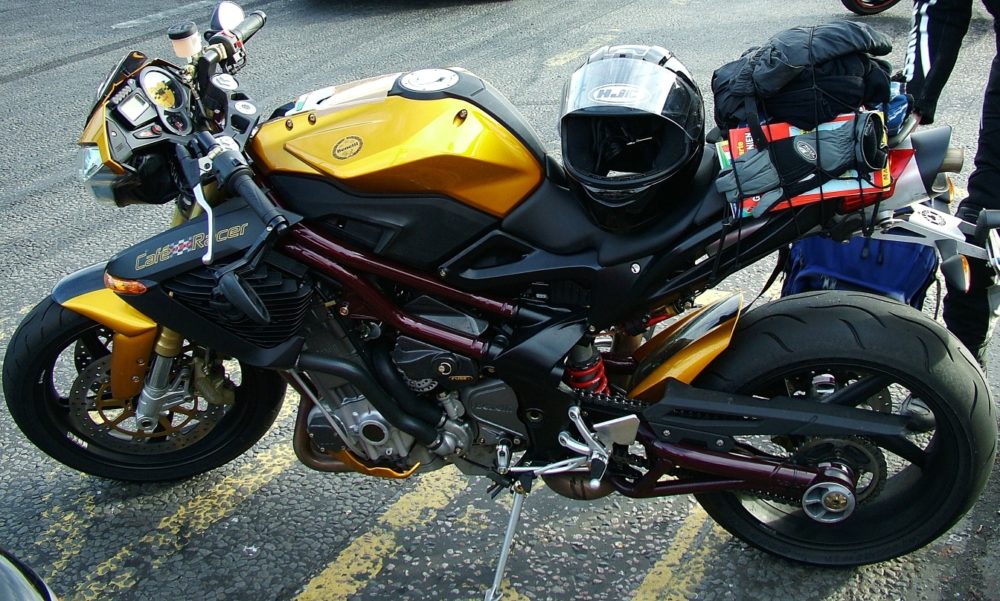 In 1962, now that Motobi was back in the control of the entire Benelli family, the two companies combined to produce over 300 motorcycles a day. There were 550 employees working for the company and life was very good indeed for the marque. All of those Motobi models were wrapped in Benelli logos and continued to sell well. Both marques were known for their well-designed, fast and reliable motorcycles and the public liked them quite well. In the years around 1969, though, things changed for Benelli.

The new Tornado 650 was released right at the end of the 1960’s, mainly made for the United Kingdom and the United States – two nations who, at the time, desired very fast twin-cylinder motorcycles. The Tornado was a vertical twin-cylinder with 57 hp and a top speed in excess of 117 mph (188 km/h). Again, it was another Benelli renowned for its reliability and its outright performance – both of which were above and beyond many of their competitors’ machines. The Tornado was eventually labeled the Tornado S, and then it ceased production in 1974. There were many reasons for this, but the ‘Japanese invasion’ of powerful, light and inexpensive motorcycles was the main cause for Benelli’s decision to halt production of the Tornado. 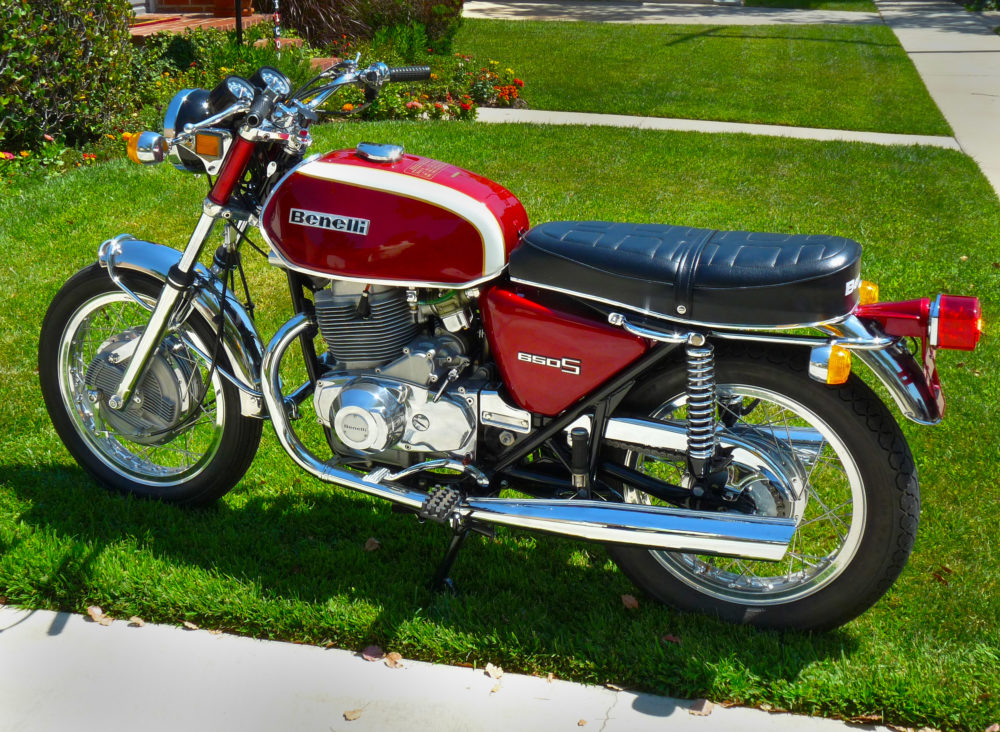 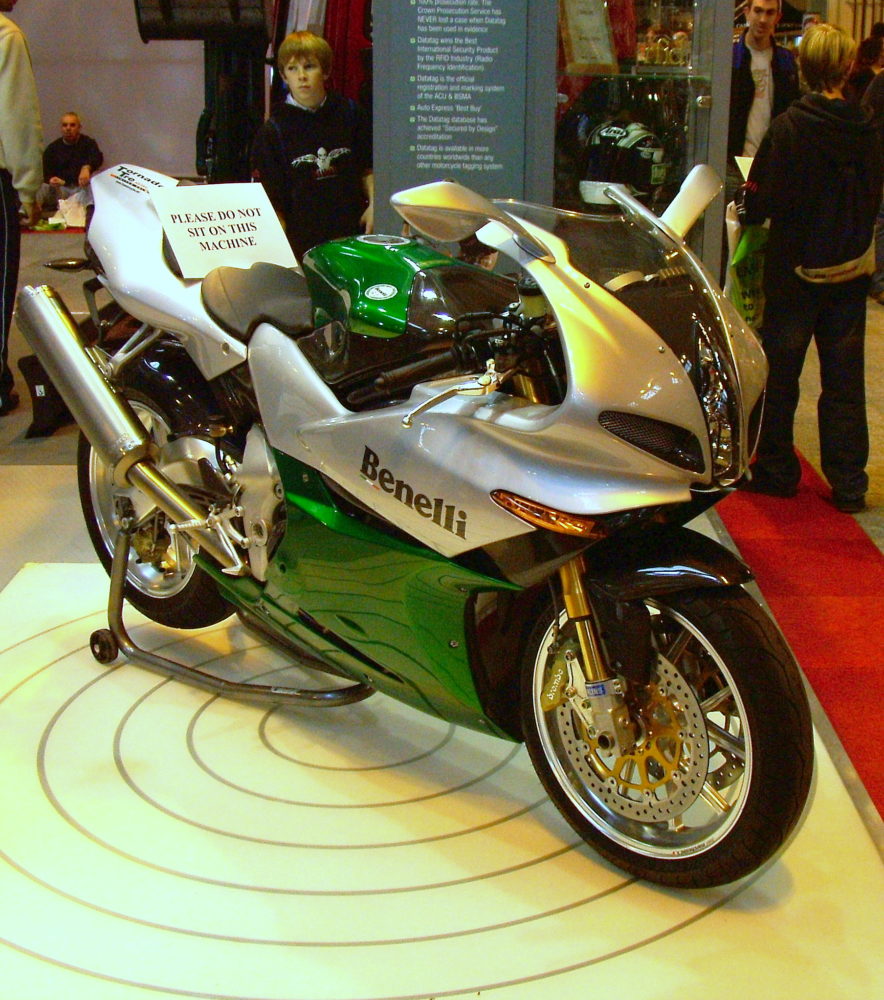 It really had all started back in the late 1960’s when those Japanese street bikes and racing machines started entering the market. It caused many problems for all of the European manufacturers, and Benelli was hit hard. In the US, they had a good foothold on the market by selling their 350c.c. and smaller motorcycles through department store Montgomery Ward – which was a very large company in the 1960’s and 1970’s. Those models from the Italian factory, most of which were single-cylinder bikes, appeared unsophisticated compared to the offerings of the Japanese factories. Hondas and their compatriots had twin-cylinder engines with overhead-cams and electric starting. Benelli had tried to gain some ground with their wonderful Tornado 650 twin at the end of the decade, but it was not enough. So, the Italian marque started producing multi-cylinder motorcycles in an attempt to compete against the Japanese machines. Things change…