The Ducati motorcycle has become legendary. The Societa Radio Brevetti Ducati was established in 1926 by the Ducati family, which included three brothers, and several Bolognese investors. The plan was to produce industrial components for radio transmissions, which were based on the patents of Adriano Ducati. 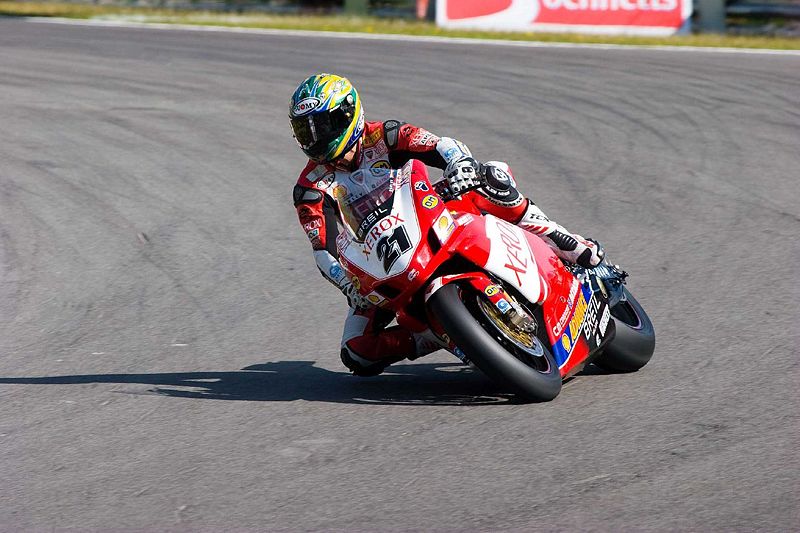 The first product released by Ducati was the Manens condenser. Others followed in rapid succession. All were highly successful around the globe. The Company experienced rapid growth and gained the respect of the international industrial community.

The cornerstone for a new factory was laid in 1935. The complex was extremely aspiring and was located in Borgo Pinigale. The Company’s objective was to establish an industrial and technological center in Bologna. It was at this time that Ducati expanded outside the boundaries of Italy. Offices were opened in Caracas, London, New York and Sydney.

From Disaster to Success

WWII broke out bringing disaster to Ducati when the Borgo Pinigale factories were bombed in 1944. With no plant in which to produce, the Ducati brothers spent their time planning and studying new products for the post war market. 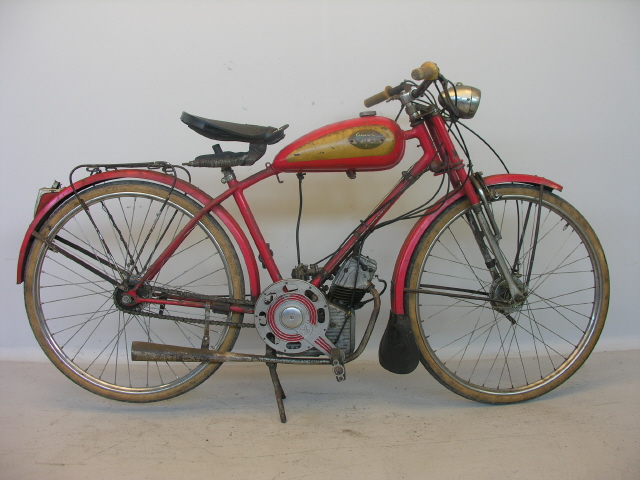 The Cucciolo debuted in 1946. It was a small auxiliary motor to be fitted on bicycles and it was destined to become world famous. In the beginning, it was sold in an assembly box and the purchaser attached it to a bicycle. Before long, Caproni in Trento began the construction of a frame that was patented by Capellino. This turned the small Cucciolo in to a mini motorcycle and caused the Ducati trademark to be recognized in the mechanical sector. It also affirmed the Ducati trademark. 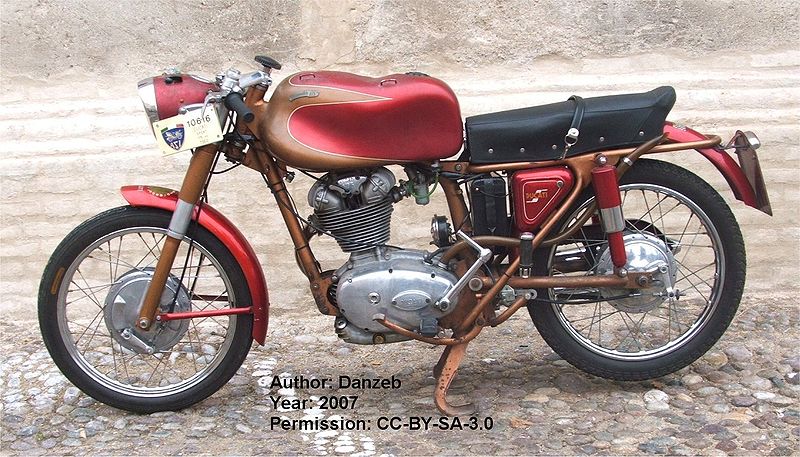 In 1952, the Cruiser 175cc was born. It had an automatic transmission and an electric starter. 1953 saw the unveiling of the economic Spartan 98cc. It was soon upgraded to 125cc.

Engineer Fabio Taglioni appeared on the scene in 1954 He taught at the Tecniche of Imola and had previously constructed motorcycles that possessed amazing performance and original technical components. The Taglioni design was introduced at the racetrack. From the moment he arrived at Ducati, Taglioni participated in a variety of long distance races, including Giro d’ Italia and Milano-Taranto.

Ducati production included Sport and Special models and the 4-stroke Tourist 274. They made their debut at the Milan Salon, along with an American model in 1957. These bikes were capable of running at 110, 120 and 135 kilometers per hour.
In 1955, Taglioni had begun to develop the desmodromic system. It became successful in 1958 and the famous twin-cylinder 250cc was released in 1960. English racer Mike Hailwood ordered a 250cc because it was a machine of superior performance. 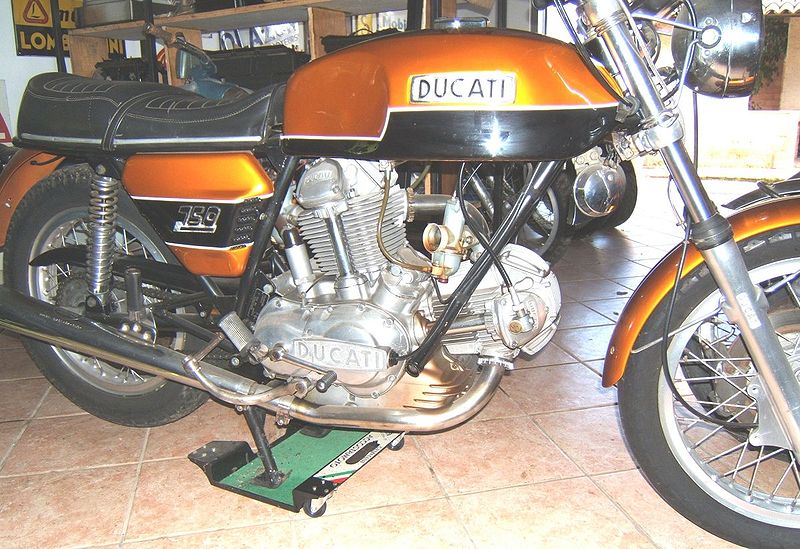 The 250cc was listed on the prestigious roster of single-cylinders in 1964 in the Aurea, Diana, Monza and later, the GP types. These motorcycles had exceptional performance levels and were capable of speeds of 150 kilometers per hour. This model influenced all future single-cylinders until the 250, 350 and 450 Scrambler appeared. Sports fans were enthusiastic when the Mach 250 debuted in 1964. This motorcycle ran at over 150 kilometers per hour.

The first Ducati with desmodromic distribution was the 450 Mark 3D that was released in 1968. It could exceed speeds of 170 kilometers per hour.

Success at the Track

Ducati had attained success in America in the 1960s with the Scrambler. They now utilized the same formula on the Italian market. The proposal was highly successful. The most popular was the desmodromic 450.

The end of the 1960s saw a boom of maxi bikes. Taglioni once again designed a winning model for Ducati. The Company returned to the racing circuit in 1972 and participated in the Imola 200 Miles. Paul Smart and Bruno Spagginari rode newly released twin-cylinder desmodromic 750s. They raced to victory taking first and second place. In response to this spectacular win, the 750 Supersport was born. 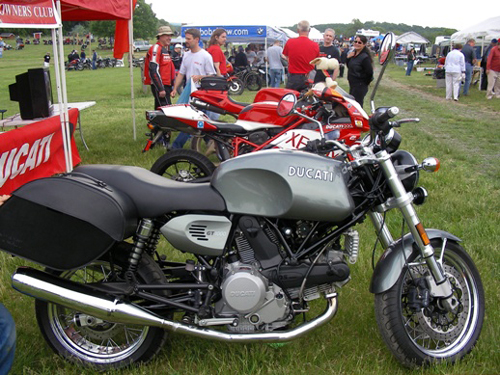 English racer, Mike Hailwood had grown up on Ducati single-cylinder motorcycles. In 1978, he rode at the Isle of Man Tourist Trophy. Sports fans and the public were amazed when he won the Formula 1 TT. The bike he rode was a Supersport that had been revamped to 900cc. Ducati recognized Hailwood’s achievement by building a special limited edition 900SS Mike Hailwood Replica.

In 1983, Ducati became part of the Cagiva Group when it was sold to Caludio and Gianfranco Castiglioni. The change in management took Ducati into the Superbike era. Ducati was able to expand its share of the motorcycle market. The Company released new models that increased the supply of motorcycles with large displacements. This also confirmed Ducati’s pledge to racing.

Argentine Miguel Galluzzi conceived the Monster in 1993. This bike was stripped of all but the bare essentials. It was an instant success. 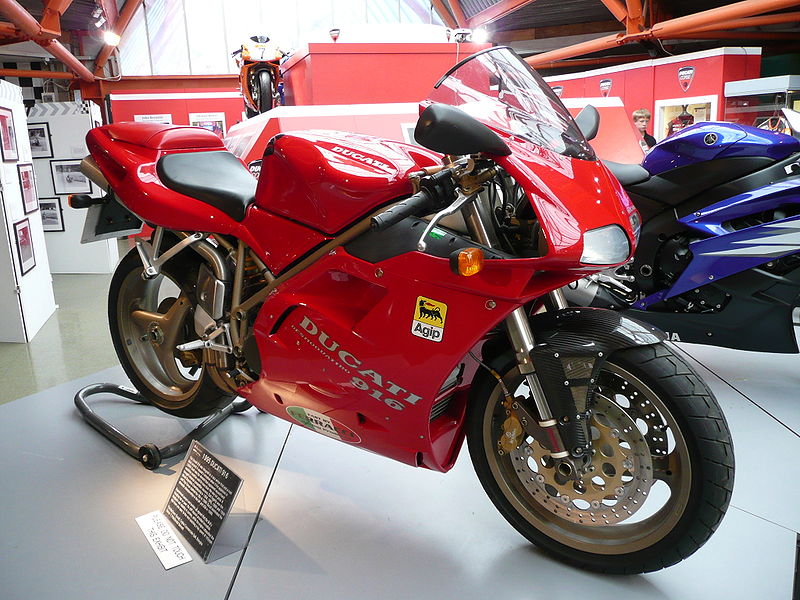 In 1994, Ducati introduced the 916. It was a revolution in the sports motorcycle category and brought with it maximum levels of performance, symmetry and style. The most prestigious motorcycle magazines voted it Motorcycle of the Year. The Supermono also debuted in 1994.

Despite its success, Ducati found itself in dire financial straits in 1995. It had been drained by unsuccessful attempts by other companies that belonged to the Castiglioni Group. Ducati was then absorbed by Texas Pacific Group. This was a blessing in disguise. Ducati now had a new group of international managers and good financial backing. The launch of the ST family enabled Ducati to enter the Sport Touring market. New management and old engineers teamed up to create record profits and sales. The most successful bike of this time was the Monster Dark. In 1998 and 1999, it reached record sales in Italy. On March 24, 1999 Ducati’s success climaxed when Ducati Motor Holding was listed on both the Milan and New York Stock Exchange.

Ducati in the new Millennium 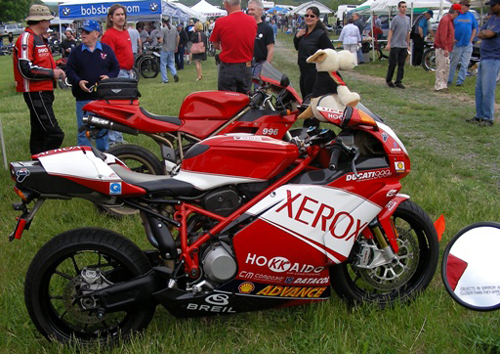 At the dawn of the new millennium, the MH900 was the first motorcycle to ever be sold exclusively online. Pierre Terblanche designed the bike. Over 2,000 customers reserved the bike. By this time, Ducati realized that they were overlooking the woman’s market. They then took steps to begin a relationship with women motorcycle enthusiasts. They opened a riding school exclusively for women.

In 2001, Ducati mourned the loss of Bruno Ducati, the last of the three brothers who had founded the company. They also lost Fabio Tagnoli the same year. Though the Company experienced a great loss with the death of the two men, the Ducati dream continues to this day. Ducati motorcycles are and always will be well known and recognized around the world.

The new Superbike range presents five models: The lightweight and agile 848, the awesomely powerful new 1198, and for those who demand the ultimate in specification, the 1198 S and 1098 R, both now with race-level Ducati Traction Control systems for the road. To mark his 3rd Superbike World Championship and to celebrate the career of Troy Bayliss, who will now retire from motorcycle racing, Ducati will build a 1098 R Bayliss Limited Edition. The Ducati Traction Control (DTC) system further underlines Ducati’s technology flow from racing to production and demonstrates how solutions developed for the track can be applied to enhance safety on the road. ENGINEERED BY THE STOPWATCH The Ducati 848, 1198 and 1098 R Superbikes are the most advanced, most powerful twin-cylinder motorcycles ever built. They are the product of a team of designers and engineers who have combined their Ducati MotoGP and World Superbike technologies to create the finest sport bikes in the world. From race-level engine specifications to world championship-winning traction control, the results are pure excellence