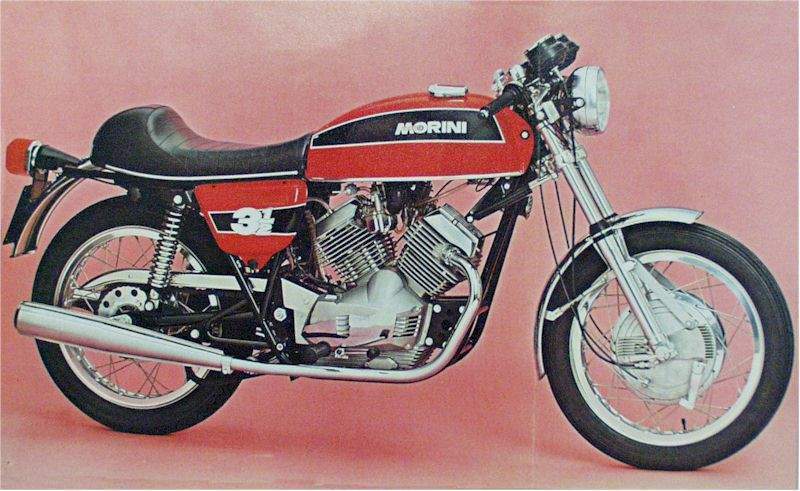 The real genius of Lambertini, though, comes with the creation of the Moto Morini V-twin engine. This revolutionary design was inexpensive to build and it had improved power and fuel economy compared to the singles of previous Morini bikes. The first model with this engine is the now legendary 3 ½ Strada. The engine was a longitudinal 72° 344c.c. V-twin with a toothed belt driving the cams, a ‘Heron’ head, parallel valves (of course, due to the head), a one-piece forged steel crankshaft, ball bearings for the main bearing, plain bearings on the big end, and single common-pin conrods. Additionally, the 3 ½ was given a steel swingarm, Ceriani rear suspension, multi-plate dry clutch, electronic ignition, and a Marzocchi front fork. The early models were fitted with a leading-shoe drum brake, but successive models were upgraded to a single-disc setup from Grimeca – which could be upgraded to a dual-disc. The Sport model of the 3 ½ was released in 1974 and had a shorter seat section, lower handlebars and increased power. Some of the switchgear was a bit dated and could have been made better, but the 3 ½ won over many motorcycle journalists and it soon became a much sought-after motorcycle the world over. 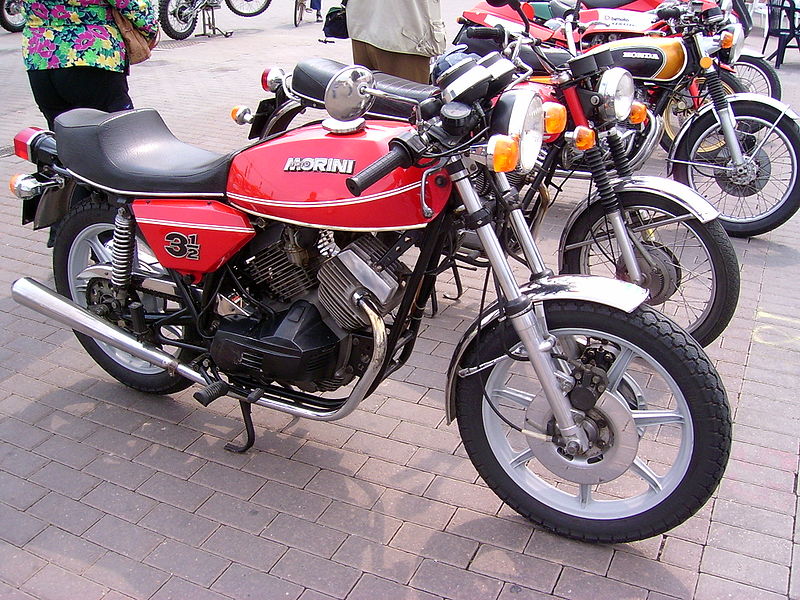 Many derivatives of the 3 ½ engine were produced as well. Some were made with only one cylinder of the V-twin, with the second cylinder removed and covered as the engine was of a modular design. The 1975, six-speed 125H and the 1978 250T Mono; neither were successful, though. Some slightly successful models are made, including the Kanguro which is designed as an ‘adventure’ bike. It sells very well. They even manage to put this engine into a custom cruiser frame in 1986 and call it the Excalibur. Both a 350 and a 500 version are produced and Harley-Davidson takes serious interest. But, H-D is not in good shape financially, and they never put together a deal. 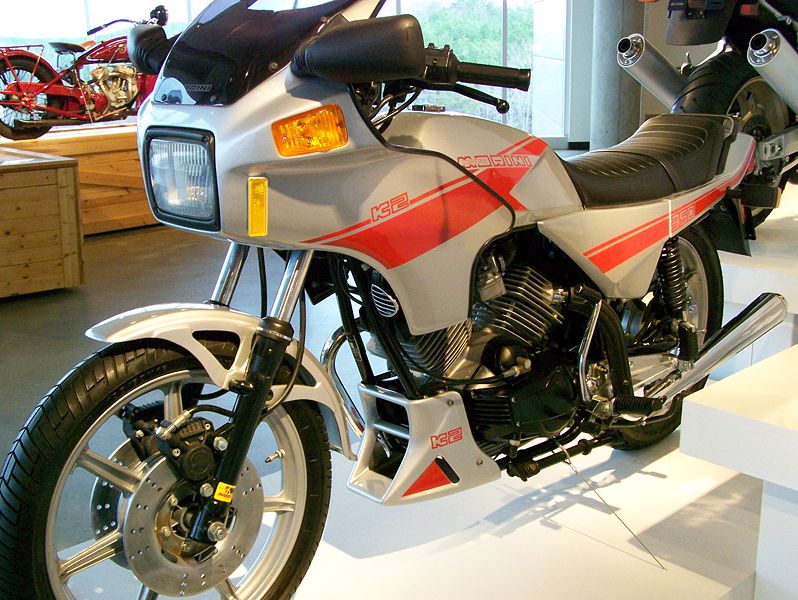 Moto Morini also took their V-twin engine to a larger size with the 1977 500 – actually a 479c.c. engine. It was known as the 500 5 Marce due to its five-speed gearbox. That same year Morini also released a 500GT model which had more power and a more sporting riding position. Lambertini even designs and builds a 500 Turbo version, but it is only displayed at the EICMA show in Milan and is never produced by the factory. In 1981, Moto Morini adds a six-speed transmission to the 500 V-twin and it is instantly the most powerful – and the fastest – Moto Morini ever. The engine is even fit into an off-road chassis and competes in many rallies of the day; they call it the Camel 500. It is successful at racing but not in the showroom. 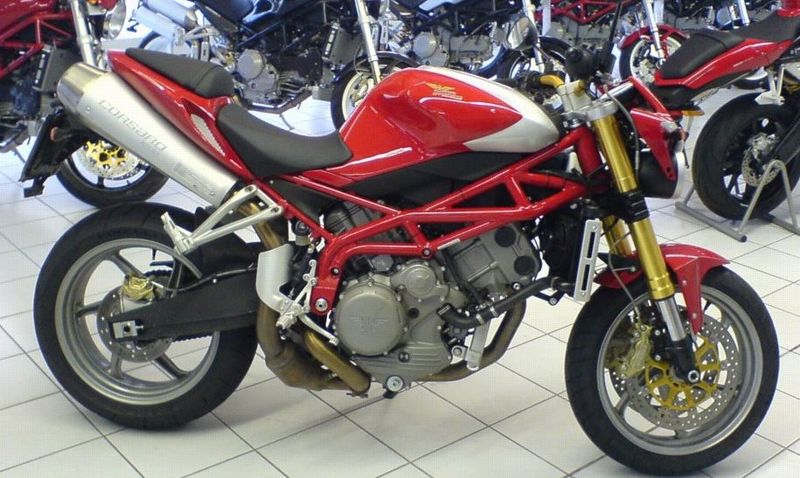 The decade of the 1980’s were not kind to Moto Morini, even with the continued success of the 3 ½ and the many other models based around Lambertini’s designs. Eventually, the company is sold by Gabriella Morini to Cagiva. The Castiglioni family owns and operates the Cagiva group and they were on a buying spree during this time – they also held the rights to Ducati and MV Agusta. Unfortunately, Franco Lambertini has a very good new V-twin design which never sees production. Then, in 1988, Cagiva launches the Dart 350 and 400; the bike is basically a Morini engine in a Cagiva Freccia chassis. It fails dismally and, along with the departure of Lambertini, it leads to the demise of the Moto Morini motorcycle for more than a decade.

When Cagiva decides to sell the Moto Morini name, in 1996, the Texas Pacific Group purchases it along with the Ducati holdings. Ducati had no plans to build Moto Morini motorcycles, so the name languishes just waiting for someone to revive it.

In April of 1999, the Morini family gains control over the name and the rights to manufacture Moto Morini motorcycles. Alfonso Morini’s nephew is the head of the company, Morini Franco Motori SpA, which purchases Moto Morini. The beast lives! 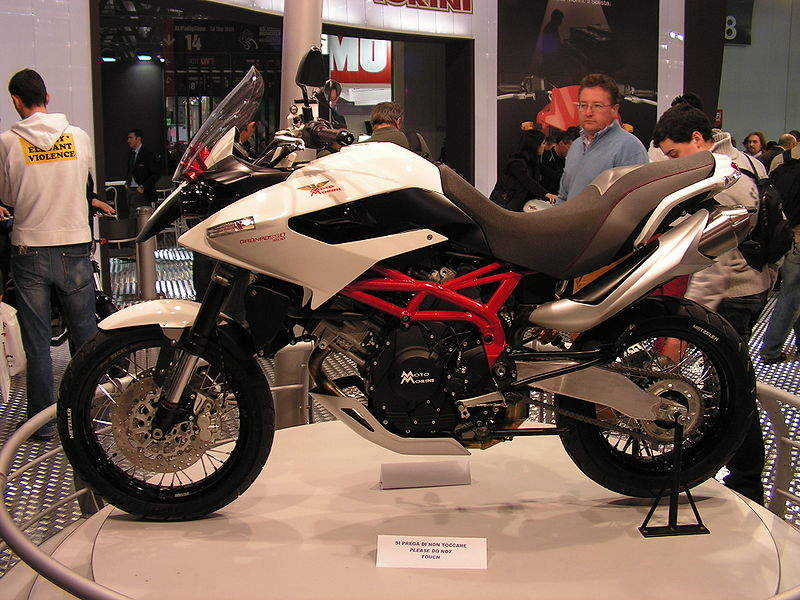 The new factory is established at Casalecchio di Reno right next door to the new owners. It takes some time but, in 2005, news comes from the Moto Morini factory that the Corsaro 1200 will soon be available for purchase. Several new models come from the marque and production ramps up to deliver the new machines.

The new line-up is varied, but all based around the same engine – the Bialbero CorsaCorta 1187c.c. 87° V-Twin produced by Moto Morini for Moto Morini. The model line includes the Corsaro 1200, the 9 ½, 1200 Sport, Corsaro Avio, Corsaro 1200 Veloce, Granpasso, and Scrambler. The variation in purpose is easy to see when the bikes are seen together – for instance, the Corsaro Veloce is built for pure street dominance with 140HP on tap and a race-spec ECU available, and the Granpasso designed for tackling the roughest roads in the most remote locations. The motorcycle press loves the bikes; they rave about the handling, the power on tap, the looks and the smooth engine. Sales have increased each year since the initial introduction of the Corsaro 1200 in 2005.

Unfortunately, the new line of bikes does not bring in enough buyers and the Moto Morini company files for bankruptcy protection in September 2009. The company applies to the Italian government for help and receives it. Considering the number of motorcycles Moto Morini sells in the first half of 2009, the company may be able to pull itself up and become profitable again. For all of the history, the beauty, the passion, the performance, and the pure will to build some of the greatest motorcycles on and off the road, let us hope that they continue to survive and even prosper in the future!

Be sure to read Moto Morini part 1 of this article!