To start at the actual beginning of the great Moto Morini motorcycle marque, one must go back to the birth of Alfonso Morini. He was born on 22 December 1898 to a family of limited means in northern Bologna, Italy.

Shortly after his birth, the streets of Italy were alive with motorized bicycles. Perhaps, it is thought, the streets of Bologna are where Morini acquired the desire for the roar of a motorcycle. It certainly would not be the first time that someone was influenced by that sound…

At the young age of 16, Morini began his motoring career by repairing motorcycles, but it was cut short by the beginning of the First World War. But, Morini was not deterred by this; he signed up with the 8th Motorcycle Unit in Padova, Italy, just north of Bologna. There he worked throughout the war and gained valuable knowledge of engines and motorcycle technology. 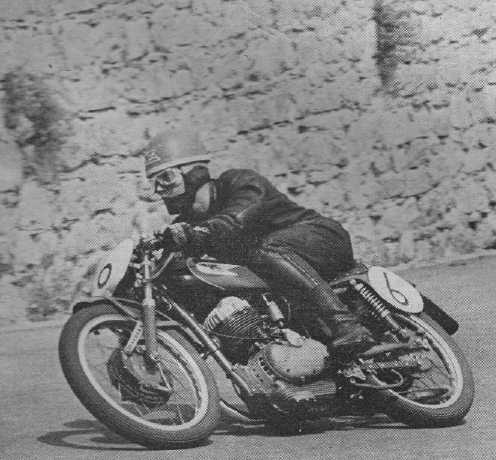 The war ended and Italy began to rebuild. In the year 1925, Mario Mazzetti took notice of the quality work of Alfonso Morini, and asked Morini to build him a 125c.c. two-stroke single racing motorcycle – the MM125. This was the first motorcycle designed, built and even raced by Morini and it was an unqualified success. The two raced together for several years and set six records at the Monza circuit during the Grand Prix of Nations which stood for over twenty years! With a larger engine displacement, the MM175 two-stroke built by Morini set a world speed record of 101 mph (162 km/h) in 1933.

When the two went their separate ways in 1937, Morini changed focus a little. He went on to build 350c.c. and 500c.c. three-wheeled vehicles. This was when the name ‘Moto Morini’ was born and these were the first machines so branded. The Italian government encouraged the manufacture and sale of the three-wheeled, fuel-efficient vehicles like Morini’s. He designed a model known as the Moto Morini M610; it was one of the most advanced vehicles of its time and had a cardan driveshaft, a very new technology at that time, along with forced-air cooling, dry sump, and a gearbox separate from the engine cases. Another World War would interrupt Morini’s work again – what we call World War II. The company was forced to produce aeronautical components by the Fascist Italian government and the factory was eventually bombed by Allied Forces in 1943.

Finally, in 1946 Moto Morini was back. The factory, now located on Via Berti in Bologna, turned out a 3-speed, single-cylinder, two-stroke T125 for its first post-war machine. The T125’s success lead to a Sport version being produced in 1947.

With an established and successful motorcycle, Moto Morini entered into its first factory-supported competition in 1948 with the T125 Competition and promptly won the Italian Championship for Lightweight Motorcycles with Raffaele Alberti riding the machine. The very next year, Umberto Masetti won the same championship but on a Moto Morini 125c.c. single-camshaft four-stroke. That same race bike brought race victories for Emilio Mendogni in the Grand Prix of Nations in Italy at Monza and in the Spanish Grand Prix, both in 1952. 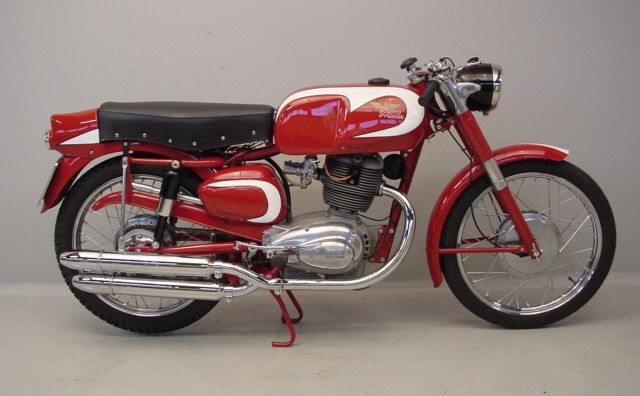 Moto Morini started production of a 175c.c. pushrod OHV (over-head valve) four-stroke in 1953. This motorcycle was the basis for many models to come afterwards. This was due to the simplicity and overall reliability of the 175c.c. engine. It spawned the Turismo and the Settebello competition version. The Settebello went on to win many races around Europe, and its success cements Moto Morini’s place in motorcycle competition for the decades to come.

The following year, 1954, the 175 Gran Turismo, 175 Settebello, and the 175 Rebello are all launched. The Settebello and Rebello quickly gain a reputation for excellence and attain mythical status in short order. In 1955 it seemed that the Rebello was simply unbeatable – it wins in the Italian race series and takes several top honors, and outright victories in many Italian long-distance races through to 1958. During this time several other successful models of the 175 are produced including the 175 Supersport and 175 Briscola.

Another model of note is the Sbarazzino, which replaced the T125 two-stroke with a 98c.c. four-stroke engine in 1956 and is produced for a decade.

In 1957, Morini decided to move up to the 250c.c. engine size with the Rebello 250 – based on a short-lived Rebello 250 from the previous year. This design was helped along by Morini himself, Dante Lambertini and Nerio Biavati, and it became the famous 250GP, a bike dubbed the ‘fastest single cylinder in the world’ by the motorcycle press of the day. In 1958 it dominated the Grand Prix of Nations at Monza.

The next year came another small and friendly machine – the Corsaro 125, a bike which launched many a racing career.

In 1960 a limited production run of ‘short-rod’ Settebello were made, but many owners of older Settebello bikes were re-built with spare parts to emulate this 1960 model. This year also saw a special version of the standard 175 Settebello created and raced with great success. However, it was never homologated, so it is disqualified. 1960 was the first year for racer Tarquinio Provini to ride a Moto Morini and it was a good year, but in 1961 and 1962 he easily won the Italian Championship.

Racing with Provini in 1961 was a legend in the world of motorsport, one Giacomo Agostini. He raced a 175 ‘short-rod’ Settebello and came in second in his first ever race for the factory. 1962 and 1963 brought his first significant victories when he won the Italian Cadet Championship (1962) and the Italian Junior Championship (1963). 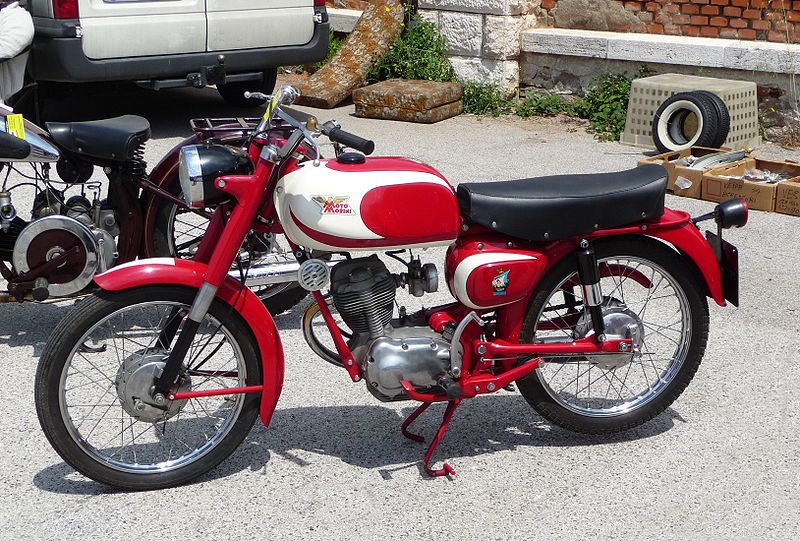 The decade of the 1960’s were very good times for Moto Morini. It was this decade when Morini moved into the USA and sold many of the same models there as in Europe, but the model names were altered to suit the new market. Other additions to the line-up were the Sbarazzino 100, the Corsaro 125 and the many Corsaro 125-based motorcycle models: Veloce Competition, Veloce Sport Lusso, Veloce Super Sport, Veloce Country, and the Veloce Regolarita. The entire Corsaro line is increased to 150c.c. in 1964.By the late part of this decade, the Regolarita begins to rule on the off-road courses of Europe. They take many championships and even win an International Six Days Enduro competition in Sweden.

In 1969, an era ended as Alfonso Morini died at the age of 71 and his daughter, Gabriella Morini takes over the company ownership. Morini’s death left a huge void at the company, but they quickly recovered. In 1970, the younger Morini manages to hire Franco Lambertini away from Ferrari. He started a special new era at the Italian company, one in which many historic motorcycles were produced.

With Lambertini, the long-serving Regolarita receives a new engine; this engine is known as a ‘flat head’ and it puts the combustion chamber on top of the piston head and is released in 1971. A year later, in 1972, the Corsaro Super Scrambler is produced. It has many new features including a full duplex frame, telescopic hydraulic front fork and a smaller fuel tank.

Read part 2 of this article about Moto Morini!