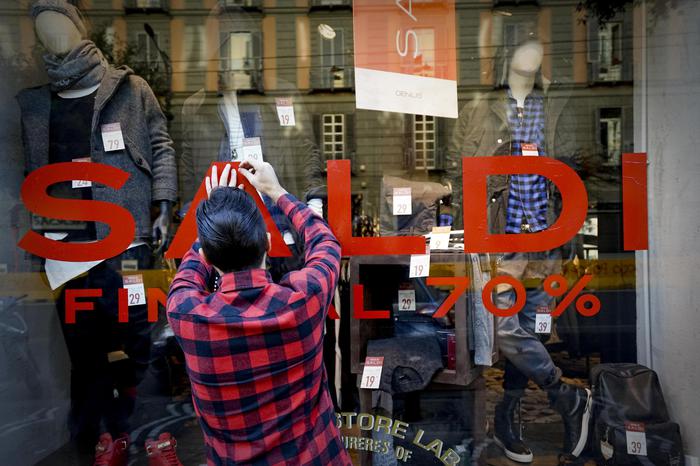 While Italian businesses said free-spending tourists will help to boost traditional January retail sales events, consumer groups warned that families are too tapped out after years of recessions to shop.

The semi-annual sales started in two southern regions, Basilicata and Campania, on Friday and elsewhere in Italy begin Saturday, earlier than has been tradition.
Businesses hoped that discounted merchandise would move quickly during the January sales.
“Sales are a great opportunity for everyone, Italians and foreigners,” said Roberto Manzoni, president of the association of wholesale fashion and clothing stores.
“Christmas sales were understated – the volume remained essentially the same as in 2013,” he said. “So these winter sales are very eagerly awaited, shopkeepers will start off immediately with big discounts in the hope of inverting the trend,” he added.

Italy’s hard-hit retail sector needs the help, as it struggles to survive the long-running recession.
The country has not been able to shake off hard times that date back to 2008.

In fact, farm organization Coldiretti reported Friday that consuming leftovers has become stylish again in a major way, with some 60% of Italians saying they have been wasting nothing from New Year’s celebrations.

Further evidence of the hard times came in a report Friday from Confindustria, representing Italy’s biggest employers, showing that the number of older Italians workers staying on the job has climbed substantially since 2007.

The economic downturn has driven up overall unemployment to 13.2% while youth joblessness has skyrocketed to 43.3%. Meanwhile, business group Confesercenti said Friday that end-of-season sales are worth about 20% of the annual turnover of struggling Italian shops, “which in 2014 again paid the cost of the economic crisis”.

It said that in 2013, more than 11,700 fashion distribution firms went out of business, “with as many as 900 shops closing per month”.
The group added: “The hope is that 2015 will mark the end of a negative trend that has been going on for more than seven years”.
However the Codacons consumer watchdog group said bringing forward the sales’ date to start on the weekend will not increase business for stores.

“Families get to the start of the end-of-season sales with wallets already empty from the spending for Christmas and the end of the year” Codacons said in a statement.

Sales will be down 8% compared to last year with families spending no more than 184 euros each on average, Codacons predicted.

Only 35% of families expect to make purchases during the sales season and many stores already have begun somewhat camouflaged sales by sending emails and messages to consumers with personalized promotions.

According to other estimates by consumer groups Adusbef and Federconsumatori, 36% of families will buy something during the sales while average spending per family will be 179.4 euros.
That is about 5.6% less than last year.