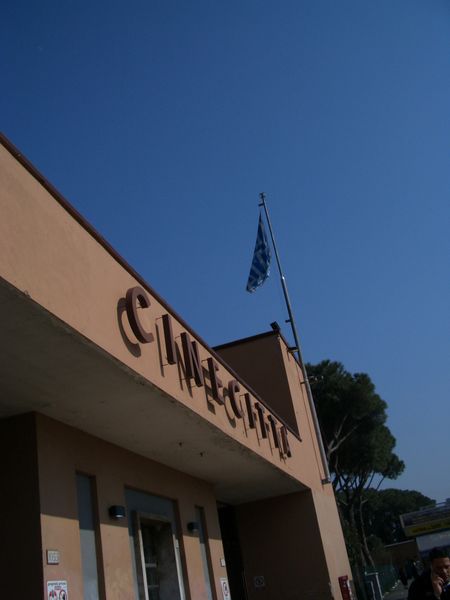 Cinecittà Studios SpA, refounded in 1997 (Mr. Luigi Abete president), is a complex of theaters and studios, located on the eastern outskirts of Rome. Here movies and TV shows are made. In the past were mostly movies but, due to the TV outbreak, most of the movie studios were turned into TV facilities.

Cinecittà begins during the fascist period. After a series of feature films, which made the Italian movie biz known worldwide. First of all ‘Cabiria’ (Giovanni Pastrone), which was shown in NYC for ten months in a row. However, in the 20’s, the crisis began due to the American and German movie productions. In 1931 the fascist regime, passed a law which put a hold on foreign movies import, consequently turning the Italian movie production into a propaganda soup, which was, of course well financed by the fascist regime.

The first venture of the, at the time, Main Office of Cinematography, was the creation of ENIC – the National Foundation of Cinematographic Industries. Within this Foundation, Cinecittà was born. Its studios, along with the ones in Pisorno di Tirrenia – near Pisa – had to represent Italy’s propaganda and movie industry.

In 1935 a 500,000 Sq.m area was found on the Via Tuscolana, in the (at the time) Roman countryside. All the works started in 1936, and after only 15 months (in nowadays this would be a miracle) was the grand opening of the first set of studios in the Quadraro area. The planning of the first 12 studios, was commissioned to architect Gino Peressutti. Plants for film developing, printing and editing were are also created.

Nineteen movies were produced in 1937, 48 in 1940 and 59 in 1942 but, in 1943, the production collapsed to just 25 and, in the same year, 1200 employees were laid off. In 1943, the fascist movie production, moved to Venice, some in the Biennale pavilions and some a the Giudecca. During the last two years of WWII, Cinecittà was occupied by the Nazis who used it as a concentration area for civilians who got round up in Rome (and surrounding areas), after the war was over, it was used as shelter for the homeless refugees.

After the war, there was a slow rebirth but only in 1947, the first post-war movie was produced. In the 1950’s, Cinecittà reached her highest peak when the American movie productions moved in. Movies like ‘Quo Vadis’ (1951) and ‘Ben Hur’ (1959) were filmed in its studios. This peak originated by the competitive budget of the Roman studios (also named: ‘Hollywood on the Tiber’) and the fact that, by law, foreign producers were forced to reinvest their earnings in Italy, without taking a dime out of the country.

The American mentality introduced in Rome (at the time still very provincial and sleepy) sociological and mundane phenomenon such as parties, night clubs, image cult and the famous ‘paparazzi’. Cult movie, representing this life style, is ‘La Dolce Vita’ (1960) by Federico Fellini. Cinettà became a myth in those days. Starlets were all over the place trying to get a part in some productions or running for Miss Italy whose winner would have had a role in a movie. Thanks to the studios, Rome was having a fairly good economic importance. The city was still small, a little over a million people. Consequently it gave job to a lot of people: workers, employees, second role actors and, of course, movie entrepreneurs and producers.

Things started sinking when the TV made its appearance and the historical Colossal went out of style. Above all, in 1987, a huge fire destroyed some warehouses and a lot of costumes, sceneries and other precious stage materials were lost for ever.

The privatization of the buildings, runned by Cinecittà Studios SpA and the opening of a new section entirely dedicated to Digital productions, have returned the studios very competitive. In the last few yeast, the studios hosted some big American productions. Cinecittà is still a very busy place!