The painter went on to say “In fact it is something that gives me lots of satisfaction”. “Why?” asked the peasant. “Because I imagine that this painting will be displayed in some important exhibition halls and lots of people will see it”. “Oh in that case…”.

In the second part of the 1800s, French painting experienced one of its moments of true glory, in that this was the period that saw the birth of impressionism. The works of these artists were among the most important in the world of that time.

But also Italian art experienced a moment of glory at that time, although the impact was not as vast as that of the impressionists. This was mostly because the Italian school was of a local regional nature, limited specifically to the region of Tuscany. This school of art is that of the “Macchiaioli“, so named because of its focusing on the environment and the landscape, rather than being concerned with detailed precision in the painting of persons, who especially if seen at a distance were just shapes.

The master of this school was without a doubt Giovanni Fattori, from Livorno, who himself recounts the following episode. He was in the country in Tuscany painting a landscape with a farmhouse, when the owner of that house approached. This farmer was very curious and asked several questions about painting and particularly if it was fun to paint. “Of course” replied Fattori, trying to respond in simple terms so as to have a meaningful dialogue with the peasant. The peasant continued “when you paint my house in your picture, could you please write on the wall: Rooms for rent during the summer.”

I think that this shrewd peasant, if he was not a pure Tuscan might have had some ancestors from Genova or at least from the Liguria region that is adjacent to Tuscany, because like the Scottish they are well known for their parsimonious and careful attention to financial matters. 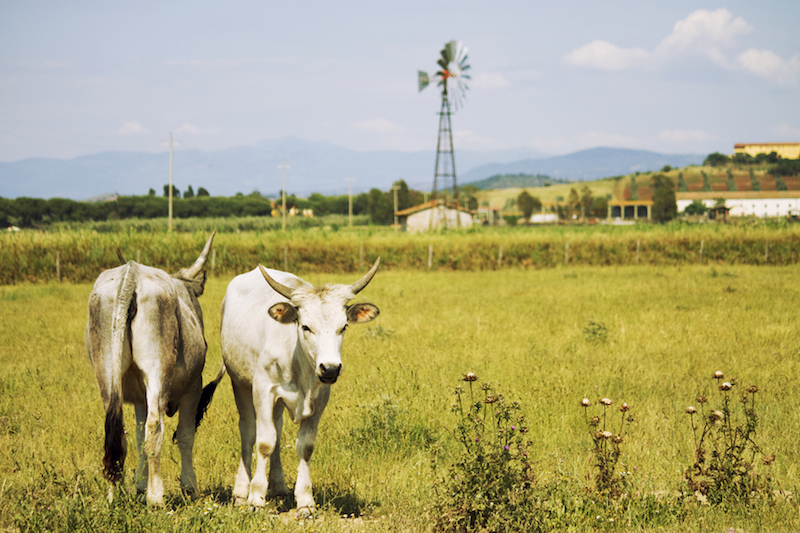 Still speaking about Tuscany I would like to tell you of an episode concerning the Butteri of the Tuscan Maremma. The people of this area were rough mannered but very proud and accustomed to working hard, a real necessity several decades ago in order to be able to carve a livelihood from a land that was once plagued by malaria. The Maremma is the land of the Butteri cowboys, not as famous as their American counterparts or as the Gouchos from Argentina.

When the famous Buffalo Bill (Colonel William Cody) came to Italy in 1890, he and his team performed several shows, one of which was to demonstrate the capture of young cattle and the taming of wild horses. Buffalo Bill and his team accepted a public challenge by the Butteri who proved that they were much more experienced than their American counterparts. This was a moment of glory for the Butteri and for the people accustomed to sacrifice in a land that was once considered unhealthy and difficult. It is enough to note that the ancient coat of arms of the region included 4 letters MMSS which stood for Misery, Malaria, Sweat and Blood (in Italian: Miseria, Malaria, Sudore, Sangue).

Of course nowadays things are very much changed, and one could certainly wish that their ancestors had bought some land in the area back then. There is no malaria in the Maremma or in Tuscany – and the Maremma and the Butteri are now enjoying great “popularity”, in part related to the recent return to natural foods and natural ways of life. As the new “agritourism” grows and back-to-nature vacations become increasingly popular, there are several places where one can spend a week just like on a ranch in the United States. I hope you remember the great Billy Crystall movies “City Slickers” and “City Slickers 2”. If you need a break from your life in the office, this is a valuable alternative. On the first Sunday in August the Butteri gather and brand the cattle, showing off their skills as horsemen. Several places in the area offer lodging and horseback riding, including overnight trips. You can visit the nearby protected area of Monti dell’Uccellina on foot or on horseback.

The long, sandy beaches here are perfect for swimming and windsurfing. The Maremma is beautiful in any season, at its best in spring and autumn, and can be hot in summer.

The Maremma offers beautiful archaeological sites from the Etruscan empires merged with medieval villages in Tuscany, and the Tyrrhenian Sea (il mare Tirreno). There is a harmony of nature and civilization in this landscape that brings one backwards in time. In fact, many of the olive trees in this region date back to Roman times, and there is even one said to have been planted by the Etruscans.

In Tuscany the Maremma offers a perfect combination of exploring the history and culture of the towns along with some of the most beautiful country and coastal walks imaginable. The rolling hills are a patchwork of expansive vineyards and silvery olive groves intermixed with forests of fir, oak and chestnut.