Stereotyping a nationality is pretty common but reality likes to tell us different stories: it is almost impossible to paint everybody with the same brush. For example, when an American woman asks a question like, “Should I marry and Italian guy?” it’s really impossible to answer. Obviously, every Italian man is different, although there are certain trends that hold true with many of us.

While people from abroad may have certain stereotypes, Italians also view themselves in a particular way. The purpose of this article is to examine some of the common ways Italians see themselves and how others see Italians, so we can learn where these views are similar and where they differ.

We usually feel safe in believing Italy’s beautiful landscape, fascinating history and outstanding art are always associated to its name, all over the world. There are also a series of topics Italians feel pretty strongly about and that are often subject of stereotypical views:  football, food, women, men, the language and the country itself

Football (Soccer) – Most Italians tend to think that football (calcio or soccer) is the most important sport in the world and that it is followed largely by men.

Food – When talking about “traditional” food, Italians think about pasta and pizza, and have some problems when they go abroad because they do not like Italian food the way it is cooked outside of Italy. Very often, they are not as open minded as other nationalities about tasting food that is not Italian.

Men – For Italian men, flirting with women is considered almost a duty. There isn’t a standardized image of the handsome Italian man, however, Raoul Bova is considered one of the most representative Italian sex symbols.

Fashion & Style– Fashion is source of great pride for Italians, because they think Italian fashion is really successful. When people think about fashion ,they associate it with Italy (Valentino, Versace, Dolce and Gabbana, etc.) Plus, Italians are not just known for their fashion, but also their personal style. Many Italians spend a great percentage of their income just to keep on trend and in style.

Italy – Italians think that their country offers a lot of natural beauty due, above all, to the different landscapes in each region. In Italy you can find everything from mountains to beaches, and some of the most beautiful in the world at that.

Italian Language – The Italian language is seen as musical and pleasant to hear. 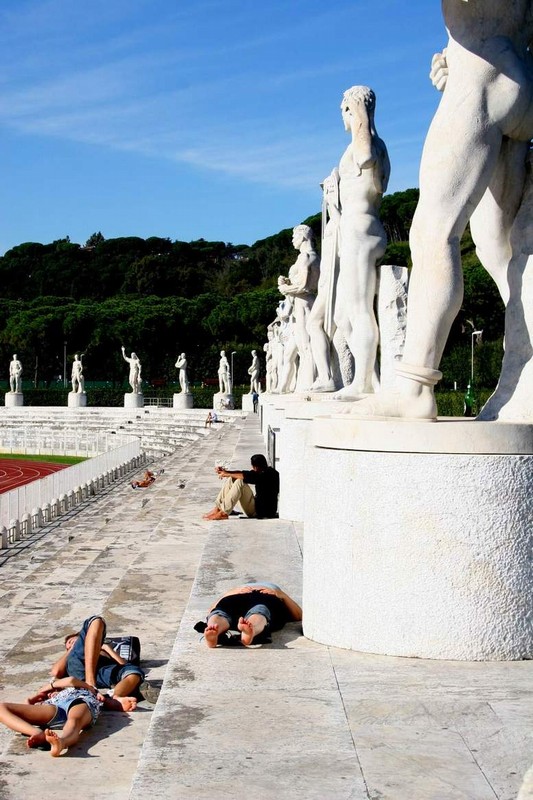 On the whole, foreign people see Italians as kind, friendly and hospitable. Some people sense a strong contrast between Southern and Northern people, with the former being the more helpful, outgoing and kind. Some negatives include arrogance, presumption (because Italians think that Italy is the most beautiful country even if they always criticize it) and self-confidence.

Football ( Soccer) – Foreign people think  Italians are football fanatics, but they also believe Italian soccer is a high quality soccer and agree that it is famous worldwide. In the soccer world, Italians are known for their defensive-minded play.

Women – a lot of foreign people think that Italian women are very attractive and sensual.

Men – Men are usually seen as playboys, Don Giovanni-esque philanderers and sweet talkers. Some think that Italian men are  far too interested in their looks and appearances. Moreover, a lot of women think that Italian men are quite jealous. Also, Italian men are often defined as “mammoni” due to the fact they live with mamma until a very advanced age, and are often spoiled. The reality, however, is that many adult children live with their parents in Italy for economic reasons and because it is nearly impossible to find an apartment to rent in a major city for an average starting salary.

Fashion – Italian fashion is considered refined, sophisticated and expensive. Many Italians are seen as having an impressive personal style that always looks put together.

Italy – As far as the country is concerned, foreign people think that Italy is very beautiful and the most mentioned cities are Rome, Florence, Venice and Naples. Like Italians, they think that Italy offers a rich variety of landscapes, but Tuscany is largely considered one of the most beautiful regions of the country.

Italian Language – The Italian language is seen as musical and romantic, but many people say that it is difficult to learn.

This is an overview of what people think of Italians, in Italy and abroad. However, all we mentioned here was taken from general surveys and it is not in any way the definitive answer on the subject. Everyone has his or her own beliefs and experiences, which may either support or reject what you’ve read here. And it’s important to remember that people are individuals, and while a culture may have certain beliefs and traditions it’s always important to get to know people for whom they truly are.