If you pay attention to the name underneath our articles, you may be aware of my interest for history.

I am a historian by training and education: I spent the good part of the past 15 years elbow deep in Late Antique texts, manuscripts and documents about early saints and oh boy! Call me a nerd but I would not have had it any other way. However, my love story with history – because of love I should truly talk, believe me – started much earlier than my college years. I was brought up by my grandparents, all born between the middle and the end of the 1910s, in the lovely hills of south-western Piedmont; as a child, it was the tales of their youth that kept me company, the events of the Second World War the first contact I had with history. It was than what I could learn on books: in my grandparents’ words, each person and each event became alive, had a shape and a smell. I grew up with my eyes and mind towards the 1940s and knew everything about the war by the age of 8 or 9, even those things that, in Italy, history books would not say.

It was only natural that such an upbringing would turn into some sort of history adoration later in life, especially for that very same period, the 1930s and 1940s, which brought to my country and to the world so much destruction, but that corresponded, for my beloved grandparents, to the years of their youth.

I have always kept this interest for the Second World War alive throughout the years, even while in University, busy dealing with monks, saints and emperors. My focus, however, tended to naturally remain on Europe, Italy and Germany. Then, during my first year of PhD, I met a person who is, today, one of my best friends: while chatting in the college bar, one night, it came out she, too, loved history and had a passion for the War Period, because her grandfather had fought at Iwo Jima. Like me, she was brought up by her grandparents and, like me, she venerated them. Her stories, and the increasing number of stateside friends I had been making in those months, pushed me to embark in yet another adventure along the many, tortuous roads of the world’s recent past.

And it is during one of these little research adventures that I came across a very interesting article about a topic I had never really considered: Italian Americans during the Second World War. By the end of  1941, when the US entered the conflict, the Italian American community was relatively well established and certainly numerous. Many families settled for decades, many youths born already on American soil, yet they all suddenly became the enemy, because hailing from an enemy state.

What did happened in those years and how did the Italian American community react to the labors and pain associated with being “personae non gratae”?

As said, the Italian community in the USA was numerous by the time the country entered the war. Data show that they had been, in fact, the largest immigrational group passing through Ellis Island since the end of the 19th century, with around 5 million of them setting foot on US soil between 1976 and 1930.

As it often happens when mass immigration takes place, not everyone was happy: these were years when eugenics were popular not only in Germany, but also in the UK and the US, a fact proven by the very presence on american soil of self proclaimed experts convinced Italians were genetically and racially different, and not on a par, with Anglo-Americans and even though by the time war hit the world the awful nature of this pseudo science had started showing its true face in Germany, some of its seeds were still present here and there, ready to branch out their hateful message, should the time be favorable.

By declaring war on Germany, both Japan and Italy automatically became national enemies, a fact bearing heavy consequences to the many immigrants in the country. On February 19, 1942, president Roosevelt signed the Executive Order 9066, largely known for having caused the forced displacement of 120.000 Japanese American from their homes on the West Coast into enclosed camps.

What many may not be fully aware of, though, is how EO 9066 affected also the Italian American community.

Italian Americans during World War Two: Enemy, but more American than ever

Rumours about the possible backlash on the community caused by the US entering the war had started straight after the bombing of Pearl Harbor: some believed the government was to expropriate all lands and properties belonging to Italian Americans who were not yet American citizens. Others were convinced all Italian Americans living nearby a militarily or diplomatically important location were to be relocated, loosing their homes. Not all of this took place, but there were heavy consequences.

EO 9066 ordered the forced relocation of about 10.000 Italian Americans and placed under strict control more than 600.000. The Italian American community, all of a sudden, felt like all the steps towards integration made in the previous decades had been wiped out in a second.

War was war and the country was afraid.

Two months later the enforcement of EO 9066 – we are now in April 1942 – Italian American families and neighborhoods were placed under stricter surveillance, with both the FBI and the Office of Strategic Services (today’s CIA) making regular checks in people’s homes to assess their potential danger. Expressing political views became dangerous and people lived in a state of continuous fear; families would often be deprived of those belongings, such as radios, potentially serving anti-government aims. These are the memories of 90 year old Frank DiCara, collected by The Smithsonian Magazine journalist David A. Taylor.  EO 9066, Taylor continues, gave freedom to the government to arrest and jail non nationals from enemy countries without having to press clear charges or set a trial, leaving their businesses and assets in the hands of the state. Fear, indeed, often results in injustice.

In spite of segregation and distrust, or maybe as a reaction to it, many Italian Americans decided to show their attachement to their new fatherland by enrolling in the Army: data show that the Italian American community was the one, among all minorities, providing the highest number of soldiers to the American Army. Many fought in the Pacific, many others returned to Europe, some physically fighting against the army of a country where they were born.

In the Fall of 1942, the US president F.D. Roosevelt publicly defined Italian Americans citizens and patriots, helping the community feeling better accepted. After Roosevelt’s address, things in the streets got better for Italian American, but the ordeal was far from over, as EO 9066 was not officially lifted, thus leaving them, quite openly, at the mercy of whichever idea or belief the official in charge had.Incredible to know, but EO 9066 was not called off until 1976.

Italian Americans during War World II, according to research conducted in those years, had no doubts about the fact their adoptive country was on the right side of the war, yet, it was heartwrenching to see their own heritage turned into a reason for suspicion and a source of shame.

As said, millions of Italian Americans were affected by the implementation of EO 9066 and, in general, by the fear and suspicion surrounding the community after Italy became a war enemy. Among them, there were also well known names of the Italian American community. Joe DiMaggio’s father Giuseppe was almost arrested by the FBI because, in spite of having lived in the US for more than 40 years, he had never applied for citizenship. Himself and his wife were forced to carry “alien enemy” cards and Giuseppe’s own fishing boat was seized by the government, virtually forbidding to the man to care for himself and his wife. Of course, they were Joe DiMaggio’s parents and they certainly had no financially issues, still their case exemplifies the consequences EO 9066 could have on families less fortunate than the DiMaggio. Curiously,  Giuseppe’s ordeal was not revealed to the press until after he was allowed, a few months later, to return to his activities by the sea.

Whereas the effects and consequences of EO 9066 on the Japanese American community are well known, little has been said about what the order meant for other minorities touched by it. Only in the 2000s it actually  became clear that it did affect rather heavily also Italian Americans for a period of time. A lesser known moment of Italian American history, in need of aknowledgement and that should become part of the historical, human and cultural baggage of us all. As for all that concerns the events of the Second World War, on all fronts, in all countries, first hand witnesses are becoming less and less: it is us, now, who have the duty to stir consciences, making sure those years are never forgotten.

The Blackshirts ( camicie nere in Italian ) were the fascist voluntary Militia and were active from 1919 till the end of WW2. They were founded to fight the socialist and communists and they supported Mussolini rise to power with the March on Rome 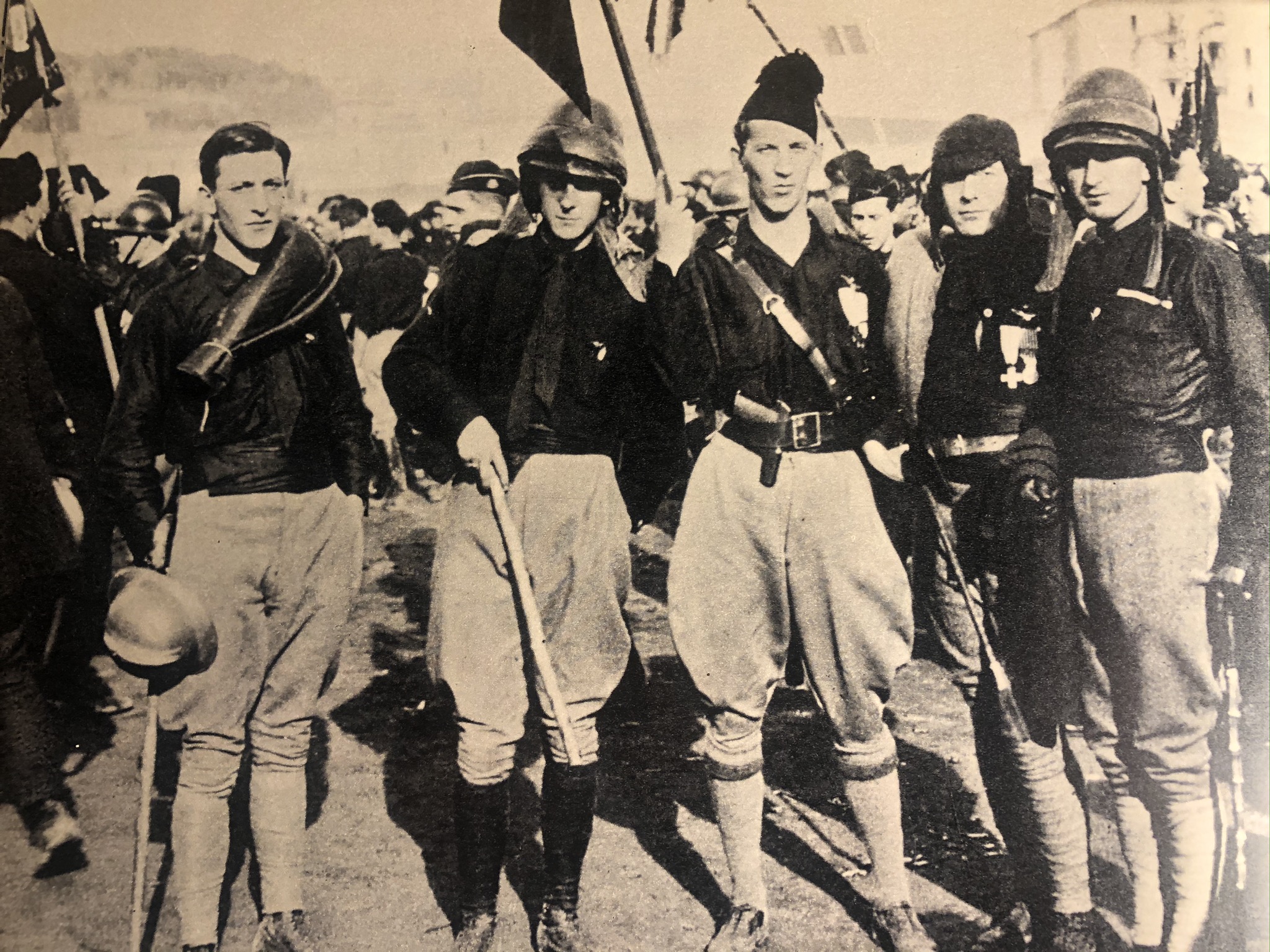