In the summer of 1978, our parents took my 17-year-old sister Jill and twenty-one-year-old me on a European vacation. We spent a week at a resort on the island of Palma de Majorca. We headed to the shops and stopped at the many fashionable boutiques and ogled the footwear. The Euros were oh-so-chic, not a sneaker or baggy jean in sight. Our first day there, our first morning, I spent all my money on two pairs of black Spanish boots. One pair was snakeskin with a three-inch heel. The other pair was knee-high leather with heels so high I could never wear them, though I tried. Almost as quickly, Jill spent all her money on shoes. One pair had a four-inch heel. They were red, strappy high-heeled sandals that barely contained the foot. They were, also, quite impossible to wear. After that shopping spree, we were broke and about ready to go home. Instead, we spent days on the hot sand giggling at Euro beach etiquette and nights in the packed clubs watching Spaniards, Brits, and Germans smoke, drink, and smoke and drink some more. We were the only Americans there. I won a bottle of Spanish sparkling wine at a dance contest and must have staged a spectacular show to pull that off: shimmy, shimmy, shake, shake, shake in my snakeskin pants and new boots. Three tanned soccer-playing Brits stayed at our hotel, and we named them Irk, Dirk, and Jerk. Judging by their names, we weren’t too impressed, but they spoke English. They were well-muscled athletes, not really our type. We acted as if we were in Europe without parents, two sophisticates seeing the world on their own. Our parents left us to our own amusements.

The second week of our vacation, we cruised from Spain to the ancient Mediterranean port cities of Tunis, Valetta, Messina, Naples, Ligurian Genoa, and Côte-d’Azur Toulon. Almost all the other passengers were older Europeans, with the exception of a large group of loud young people from California with whom we had nothing in common. Announcements on the ship were made in several languages, and they came frequently during the day and at night. Bonne nuit. Buenas noches. Bona sera. Good evening. Our only on-board friend was a young Swiss fellow who spoke little English but liked the same music that we did and sported an expensive hip look. He smoked cigarettes and drank. We sat with him in the evening, one cigarette after another he smoked away, and I won another bottle of that same Spanish sparkling wine at the ship’s disco doing my downtown New York-Motown girl shimmy. The Swiss boy’s parents were nowhere in sight, either. We took photos of the European boys because we liked their nicely tailored groovy clothes.

Tunis is a Muslim city. The day was hot and dry in the clean bleached capital of Tunisia. It was a thrill being on the exotic African continent looking out at the sea. The ship’s passengers were advised to dress modestly. Jill wears white shorts and red high heels. My white sleeveless dress blows in the desert wind. The few Tunisian women on the streets were covered in veils, in white, from their heads to their sandals. The kids stopped to look at us.

In Malta – place of the shipwreck of the Apostle Paul – we made pals with a young, dark-haired Russian who worked on the ship. We sat together in a near-empty outdoor café, where he smoked cigarette after cigarette and drank strong black coffee. By the end of the afternoon, we were tired of trying to communicate with him and tired of the cigarettes and his cigarette smoke. He didn’t have much English, and we had no Russian. 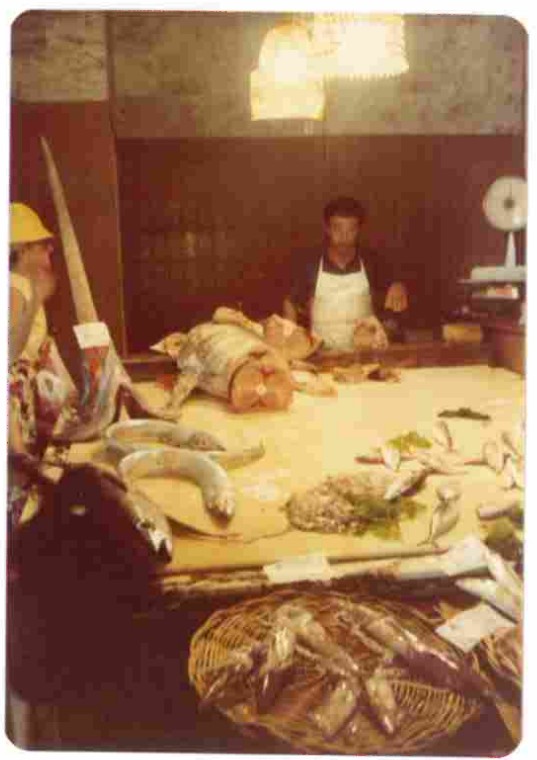 Following a Caravaggio path from Malta to Sicily’s Lampedusa’s land of the scorching sun and island of mystery there was slightly more activity in Messina, and we met a group of boys on the parched street and took their picture. A mustached fellow wears a military uniform. One curly-haired blonde Adonis wears a loincloth. In another photo, you can see they are the shortest shorts, more like underpants or a diaper, ever worn by a male. We moved on to the fish market and took photos of the giant swordfish.

The cruise ship transported us to the other Kingdom of the two Sicilies, Naples. Ancient Neápolis, the romantic Napoli of songs and beautiful harbor scenes, Naples known for its depredations and poverty and yet another place on the Caravaggio map was sadly seedy. Narrow alleys housed cheap shops with cheap wares and discarded cigarettes and cigarette packs littered the streets. We wandered the great crooked “sinful” streets that Victorian Arthur Hugh Clough mentioned long ago and felt safe once we returned to the ship. Later, our parents escorted us on the ferry going to the Isle of Capri. The shoes of a saucy, cigarette-smoking Neapolitan caught our attention, and that picture of our little L’Avventura remains in my box of photographs, next to one of Vesuvius rising through the sea haze.

Up the coast, in the beautiful and wealthy northern city of Genoa, everything was closed, and the streets were clean. A plaque displayed the name Cristoforo Columbo. Sitting in front of a gushing fountain, my pretty, curly-haired mother smiles. 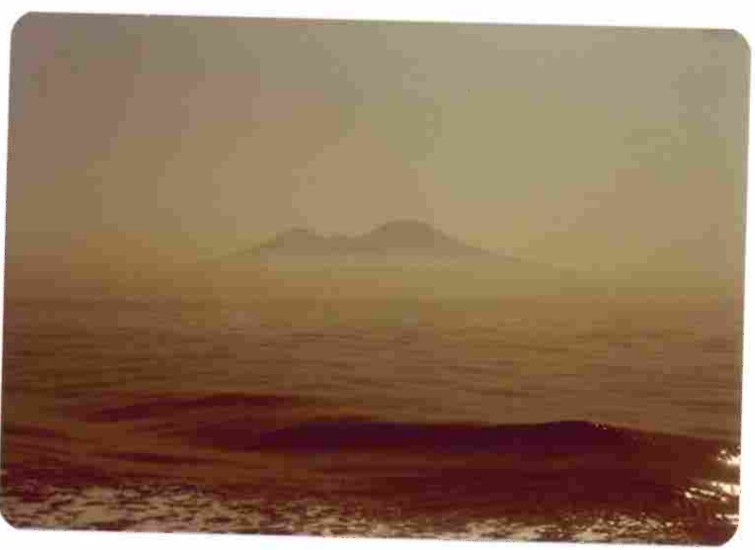 Photos of Toulon show an outdoor market and fishing port. Jill and I ambled and ate delicious cold French pizza with black olives at an outdoor Saturday market. A nattily dressed old woman walked across the photo of Jill dressed in jeans and a pink silk nightshirt standing by the boats. In most of these photos, Jill looks down at her feet or unhappily away from the camera. Sometimes, she grew annoyed with my picture taking, but was always eager to see the developed photos. I look sulky. My parents enjoyed the trip, and it remained a favorite for them. The sea was as smooth as glass, they remarked contentedly, and the ancient black sky twinkled with stars. I felt guilty because I hadn’t loved the trip as they had. Jill and I were bored silly and more interested in what was going on in downtown New York.

We didn’t visit any of the great bastions of Renaissance art; most of the cities we visited were deserted and everything seemed tightly shuttered. It was vacation time for the Europeans. They were away at the beaches or in the country, probably smoking their heads off, drinking strong coffee, and finishing it all off with more cigarettes, more drinks, more coffee. However, I gathered what little I could of European life, but didn’t have many occasions to use the conversational Italian lessons learned from my teacher Signor Lavaggi.

On our last night of the endless cruise, our grizzled waiter who had been lurking around the entire trip, grinning an unpleasant grin, secretly ducked under the table and put Jill’s foot in his mouth. Jill bolted upright. Horrified, she let out a scream, we looked at each other, and then we burst out laughing and named the waiter Footius. Tired of trying to understand all the accents, weary of the dour chain-smoking, foot-snatching, black coffee-drinking Europeans, homesick for familiar places, we were ready to get back to wholesome New York, downtown, the center of our universe.