CORLEONE, Sicily — Anti-mafia organizations are transforming former land of those who were convicted of having mafia ties into business opportunities and an educational tool for Italy’s youth.

The cooperative Lavoro e Non Solo has been reviving since 1999 confiscated land and enterprises in the terrain surrounding the town of Corleone, formerly belonging to Mafiosi such as Cosa Nostra top boss Salvatore Riina who was arrested in 1993. 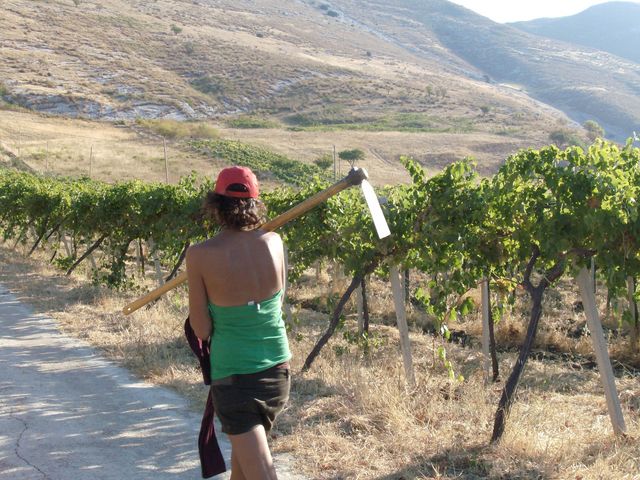 Headquartered in a home that belonged to the Riina family, jointly with the social organization ARCI Toscana, the cooperative coordinates a camp of fulltime workers and volunteers from Tuscany and universities, to develop sustainable farms and agriturismi. The products — olives, tomatoes, grapes etc. — distinguished by the label “Libera,” are sold at supermarkets Coop and Botteghe del Mondo.

The effort is not just economic, but also social and an eye-opening educational experience for youth. The objective of the youth volunteer program aims to inform people that the Mafia is not confined to Sicily or Italy, but is a reality that affects everyone in other regions too. At the same time the program tears down stereotypes associated with the city of Corleone and Sicily.

“The volunteers see that it is a different Sicily, that there is more than just the Mafia. At the same time they realize that the Mafia is real,” said Calogero Parisi, the president of Lavoro e Non Solo.

Learning responsibility the young adults are given choices for the day’s activities. On a hot August day half of the volunteers chose to zappare (hoe) a vineyard found on a deserted agriturismo, while others harvested eggplants. Cleaning and cooking duties are rotated and shared.

The cooperative also organizes insightful discussions about the past atrocities, the present initiatives and hopes for the future. Figures of other involved organizations may come to the camp or the camp may visit historical sites that have significant relevance in understanding the impact of the Mafia.

“Sometimes the speakers talk about legality. The cooperative is indirectly combating the Mafia. It is restoring the area, producing something positive,” said 17-year-old Boy Scout Lorenzo Barsocchi.

The youth worked all afternoon clearing weeds from the main entrance into the agriturismo. Singing while hacking into tall hay and stalks of wild finocchio, they are gradually contributing to the future of Sicily and Italy.

“Our intentions are too re-open this agriturismo, and eventually hire locals to work at the restaurant,” said Salvatore Ferrara one of the 13 partners who manage the cooperative.

His duties are to organize the work for the camp volunteers and permanent workers.

The profits made from the land go back into the cooperative. Buying seeds, agricultural machinery to tend the land, restoring agriturismos, all the while creating something concrete that people can believe in — jobs.

“When we first started we only had five paid workers, today we are employing 15.”

In a catch-22 the people are forced to keep the mafia machine booming because they rely on it for labor and money. “It is a complicated and strong system. The Mafia has a lot of votes because they promise work.”

A stabilized economy may be the key to ween the people off the dependency of Il Primo Stato (the principle government) as the Sicilians refer to it. Where the people lack confidence in the Italian government, the Mafia fills in the cracks by providing what the people ask for. But that comes at a price.

“The Italian government does not ask you to repay, but with the Mafia, you must repay,” he said.

Trying to motivate people to realize that together they can make a difference, while transferring their faith that things can change has come with hardships. Where productive land is essential for the survival of the cooperative and many inhabitants, someone ripped out newly planted grapevines and seedlings in 2006 and 2007.

Born and raised in Corleone, Ferrara has lost some friendships over the cooperative. When they first started some of his friends would avoid him or were afraid to stop to say “hi.”

But the volunteers have not been subject to that negativity or unfriendliness. The Corleonese stop them on the street to greet them or to learn where they are from, leaving an impression on those who visit.

“I like the climate, the partners of the cooperative,” said Sara Terracciano from Grosseto. “It’s magic.”

Article 416 bis of the “Antimafia law,” proposed by politician Pio La Torre and enacted after his assassination in 1982, relinquishes possessions of convicted Mafiosi to the Italian government.

For further information on the associations promoting the anti-Mafia movement visit www.libera.it and www.lavoroenonsolo.it.

After this article was written, ANSA, the Italian news service, reported on July 18, 2009 that Calogero Parisi’s car was damaged in a believed act of intimidation. The tires his Puegot 206 were slashed. The car was parked among other vehicles in front Lavoro e Non Solo headquaters, however only Parisi’s was tampered with. Anna Bucca, the president of ARCI Sicily, commented that it is a “pessima segnale (bad sign” compared to the associations work regarding legality and education.