Artists’ dreams come true in Italy: having been an artist myself for a long time, I can well imagine how it may be like to be given more than an hectare of land by a friend, free of any charge but that of making your biggest artistic dream become reality. This is what happened to Niki de St.Phalle, a French artist born in 1930, who passed away in 2002.

Her biggest dream is now a reality, on a sweet hill facing the sea near Capalbio, in Tuscany, 140 km from Rome. Not many people know about this artistic jewel which is definitely worth a visit while travelling along the Tyrrhenian coasts between Tuscany and Rome.

Its name is ‘Tarot Garden’ and now everybody has the chance to step into this wonderland, unique in its artistic freedom, colors and architecture. The Garden is the almost psychedelic representation of Niki’s vision of Tarot cards, showing the Magician, The Sun, the World, the Sphinx, the Hermit, Death, and many other powerful symbols expressed in the cards.

This garden has been a long love story for Niki, parallel and intertwined with her intense love story with Jean Tinguely, a well known artist himself, who supported and helped her artistic development throughout her life. Niki had troubles in school due to her character, unable to adapt to rules and order (in school some teachers even suggested she should have psychiatric treatment). She was too original and full of artistic inspiration to fit in the old fashioned structure of educational system and methods.

The ‘coup de foudre’, her love at first sight,  was Madrid, where Niki met for the first time Gaudi and his art, Park Guell on top of all. She always declared that on that very day “she had met her Master and her Destiny”. And in that moment she knew, in an inner vision, that one day she would build her ‘Garden of Joy’ too, her corner of paradise, a ‘Meeting place between Man and Nature’.

Twenty-four years later, her vision became reality, as two friends of hers, Marella and Carlo Caracciolo (from the Agnelli Family) lend her a property of theirs located on a hill in Tuscany, full of Mediterranean plants, olive trees and with a breathtaking view on beautiful fields delicately gliding to the sea.

The initial project developed incessantly, as Niki didn’t have any time limit, so she could work in total freedom, supporting financial part of her project with the selling of a perfume she created and of some works of hers.

In her words, she “was spellbound”, obsessed with her dream, and she went on with the heavy work even when different and serious health problems would force her to stop working.

She had a team of workers (among whom, her own husband) and for years she lived there, in one of the ‘cards’ (the house with the mirror walls you can below, in one of the photos, with the table and the chairs) just because she knew that dive deeply and totally into her dream was for her the only way to make it come true.

She called herself the architect, and she imposed her vision because she couldn’t help it, but at the same time she has always declared that it was not her garden, that it belonged to all the people who helped her make it.

Every sculpture was prepared with armatures, a sort of a skeleton, made from welded steel bars, on which later wire mesh was put on to receive the sprayed cement. Then came the decoration part: mirrors, ceramics, glass mosaic.

All this amazing work was made by artisans, piece by piece: as she said, ceramics were made ‘as if we were in Egyptian time’. Everything was hand made and put on sculpture by hand, by enthusiastic helpers, what Niki herself defined ‘a family, living in her natural habitat’, creating a dialogue between nature and sculpture. I have the chance to live not far away from it, and every now and then I take a day off and I drive there, to the realm of fantasy, to feed my soul with all the possibilities of artistic imagination, colors, air, light that dance together.

It is an unusual chance to enter a mirror house, to sit in a blue stone sofa full of stars, to walk among huge, powerful symbols – but most of all, it is inspiring and nourishing to be in the actual, joyful living proof that yes, dreams can come true.

Here are some more images: 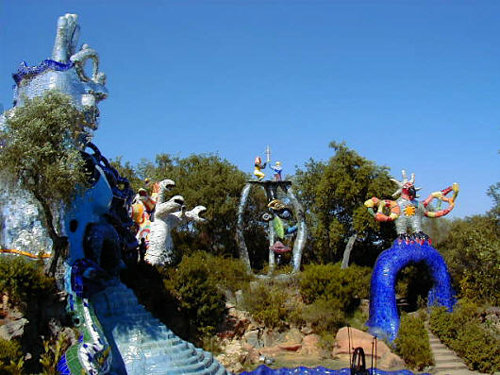 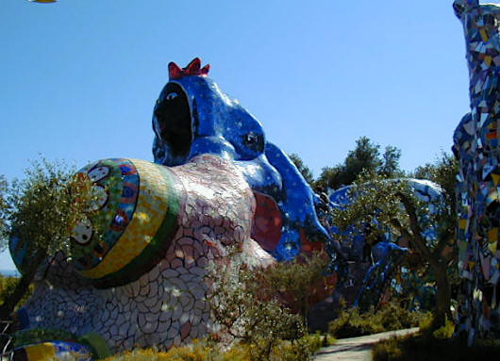 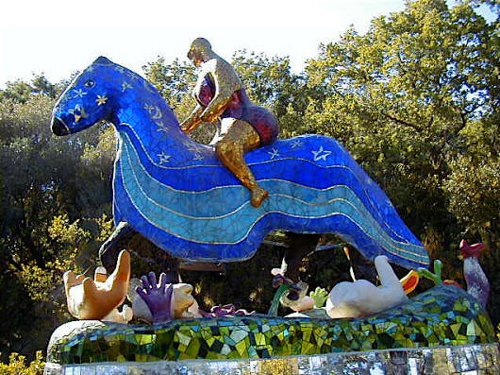 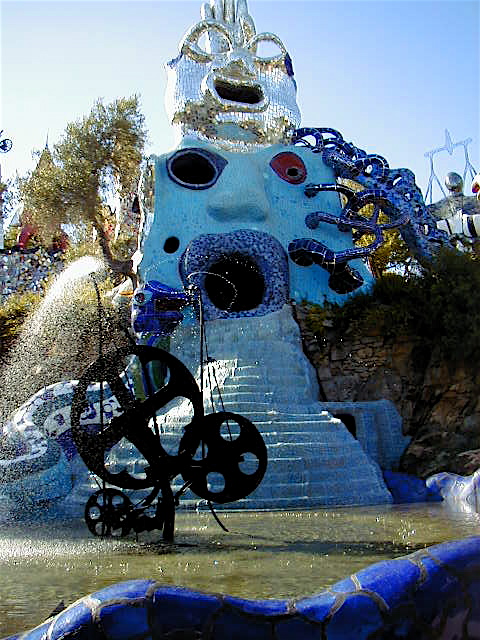