The Saracen Joust is a historical event which has very old origins: if it did not already take place in 1200, as some assert (documents of that period show how the Aretines were found of jousts and tournaments), it was certainly carried out in 1400. The most ancient document we know, however, is dated 6th August 1535. It is a majority resolution of the Priors (26 black stones v. 3 white stones) stating that the Joust against the Saracen should take place on Sundays with a prize of one arm (0,3364 sq. meters) of purple satin.

There is no doubt that the joust was originated in the Crusades and in the raids of the Saracens, which reached as far as Arezzo. The Saracen Joust (“Giostra ad burattum”) is an ancient game of the chivalry age, but dates further back to the Middle Ages. It was born as an exercise for military training and is reminiscent of the age-long struggle of the western Christianity to face the advance of the Muslims. This tournament was regularly held in Arezzo between the 16th century and the end of the 17th century, when memorable jousts in baroque style were organized. The game went on for the whole Modern Age, having an important social recognition.

The joust was indeed a great public event during the visit of important authorities (sovereigns, princes, etc.), or it was used to make certain civil feasts more solemn (e.g. carnivals and weddings). The Joust – which became a typical tradition of Arezzo at the beginning of the 17th century – declined progressively during the 18th century and eventually disappeared, at least in its “noble” version. After a brief popular revival between the 18th and 19th century, the joust was interrupted after 1810 to reappear only in 1904 in the wake of the Middle Ages reappraisal operated by Romanticism. Finally, the Joust was definitely restored in 1931 as a form of historical re-enactment set in the 14th century, and quickly acquired a competitive character. The competition takes place every year in Arezzo on the third or forth Saturday of June, by night (the so-called San Donato Joust, dedicated to the patron saint of the town) and on the first Sunday of September, in the afternoon (the September Joust).

The oldest regulations we know of, date from 1677: the rules in this valuable document are partly different from the modern one (in particular at that time all the armed knights who appeared in the square with their supporters could join the joust).

The town quarters participating in the Joust are:

The participants, who are dressed in costumes of the period, are about 350 in all and include soldiers, musicians, valets, flag jugglers, knights, jousters and infantry-man of the Commune.

The jousters of the four “gates” (the real protagonists of the event) gallop their horses with lance in rest against the Saracen, an armor-plated dummy representing a Saracen holding a cat-o’-nine-tails in his hand (“Buratto, King of the Indies”). The sequence of charges is drawn on the week preceding the joust during a costume ceremony in “Piazza del Comune”. You can never foresee what the result of the joust will be: it depends on the ability, the courage and the good-luck of the eight jousters who alternate on the packed-earth sloping track (the “lizza”) that runs transversally across “Piazza Grande”. The competition is won by the couple of knights who hit the Saracen’s shield obtaining the higher scores (scores range from 1 to 5). The quarter associated to the winning knight receives the coveted golden lance. In the event of a draw between two or more quarters after the standard number of charges (two sets of charges for each jouster) the prize is assigned with one or more deciding charges. At the end of the joust, mortar shots will hail the winning quarter.

On the Sunday before the Joust the quarter captains take an oath in the town hall square and the race order is drawn up: it is a solemn ceremony which takes place in a very picturesque setting.

On the day of the Joust the historical procession marches on parade through the ancient and most beautiful streets of Arezzo, before entering Piazza Grande – one of the most characteristic ancient squares in Italy – where the tournament takes place. After the performance of the flag juggling and after the reading of the challenge to “Buratto, King of the Indies”, the exciting joust begins. Two horsemen from each quarter charge against the huge effigy of the Saracen according to the draw and, by striking his shield with their lancers, try to get the best score. Once the Saracen is hit by the lance he starts rotating and threatens the horseman with a heavy whip armed with lead and leather balls.

The quarter obtaining the highest score wins the “Golden Lance”.

The Saracen Joust is organized by the Municipality of Arezzo through a special institution whose governing body (the managing council) is chaired by the Major of Arezzo, but also includes the presidents (“Rettori”) of the four competing quarters. The jousting day starts in the morning, when the town’s Herald reads the proclamation of the joust challenge, and then continues with a colorful procession of 350 costume characters and 27 horses parading along the streets of Arezzo. The topic moment of the parade is the blessing of the men-at-arms, which takes place on the steps of the Duomo and is given by the Bishop of Arezzo. The knights’ tournament is held in the precious scenario of “Piazza Grande”, guided by the “Maestro di Campo” and preceded by the costume characters and the town’s ancient banners entering the square accompanied by the sound of trumpets and drums.

Some important moments can be defined at this stage of the event: the highest authorities of the Joust entering the square (the magistrates, the Jury, the quarters’ presidents), the performance of flag-wavers, the jousters galloping into the racing field, each knight representing an ancient noble family of Arezzo, the knights’ arrangement on the “lizza” (jousting track), the Herald reading the Challeng of Buratto (a poetic composition written in octaves in the 17th century), the crossbowmen and the soldiers greeting the crowd shouting “Arezzo”, the magistrates’ authorization to run the joust and finally the Joust’s musicians playing the Saracen Hymn, composed by Giuseppe Pietri (1886-1946). Then, the real competition starts.

The rules of the tournament are contained in “technical regulations” that repeat – virtually unchanged – the Chapters for the Buratto Joust dating back to 1677. They are easy to understand, and yet worded in such a way as to guarantee a long-lasting suspence. The outcome of the fight between the Christian knights and the “Infidel” is undecided until the very last moment due to dramatic turns of events. For instance, jousters may be disqualified if they ride accidentally off the jousting track, or their scores may be doubled if their lance breaks after violently hitting the Saracen.

In these years the popularity of the historic re-enactment of the Saracen Joust of Arezzo has greatly grown – even abroad – thanks to the evocative setting that makes it unique.

Along with the Joust, visitors coming to this ancient Tuscan town can discover many other pearls of this territory, from the Etruscan-Roman art to the art of Piero della Francesca and the architecture of Giorgio Vasari, as well as many other cultural attractions. 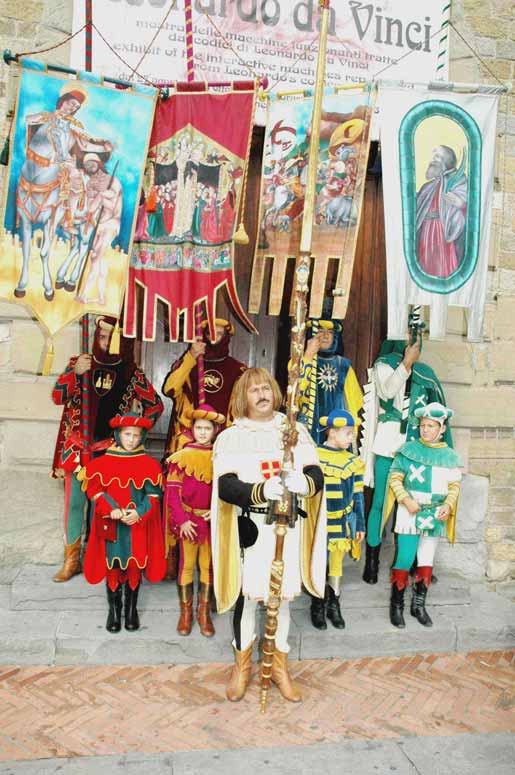