According to the interesting blog placidasignora, u pandùçe is a typical Ligurian Christmas cake. In the rest of Italy, it’s known as pandolce alla Genovese, which translates literally as “Genoese sweet bread.” And that’s exactly what it is. In the western-most part of Liguria, near the border between Italy and France, pandolce is also known as pan du Bambin, the Holy Child’s bread. See the Christmas recipe Pandolce alla Genovese!

Its history’s interesting and rooted in a glorious past. According to historian Luigi Augusto Cervetto, pandolce hails all the way from Persia when, in the golden times of the Empire, a sweet bread filled with candied and fresh fruits was offered to the Emperor by the youngest of its subjects, on the early morning of new year’s day.

This habit’s the same still respected today in Liguria where it’s the youngest member of the family to carry the pandolce to the table on Christmas Day.
According to others, the origins of pandolce are entirely Ligurian: it’d derive from an old Ligurian bread called pan co-o zebibbo, that’s sultanas bread. This basic recipe was to be enriched with candied fruits, orange blossom water, and pine nuts. So here’s the sweet Christmas recipe Pandolce alla Genovese! 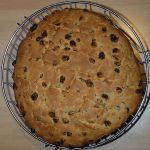