Setting the Standard for Fraud…

There are few fraudulent financial schemes out there today that reverberate through history quite like the infamous Ponzi Scheme. Although this term has made recent headlines, this con is not new and stirs up so many emotions due to the fact the scheme only works with a very charismatic con-man. The trickster that would set the standard for this kind of fraud was an Italian immigrant that went by the name of Charles Ponzi.

It’s hard to trust a con-man at his word, and Ponzi’s background is as varied as his many aliases, but it seems he arrived in the United States in 1903, nearly broke. His early life in America would foreshadow the larger crimes he would later concoct. While working in a Montreal bank, Ponzi witnessed a fraud involving bank deposits that had similarities with his later scheme. Ponzi would spend time in jail for forging checks and later for smuggling illegal immigrants. After release he moved to Boston and it seems that at first he tried attempted legitimate forms of employment, however in the ashes of Ponzi’s failed advertising business, he developed a fraud that still carries his name. 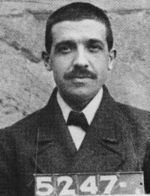 The Creation of the Ponzi Scheme

He may not have invented the scheme, but Charles Ponzi arguably did it better than anyone to that date. The method is rather simple: the scheme relies upon a continuous stream of new investors in order to pay the so-called ‘returns’ of the earlier investors. Due to the excellent return on investment the original investors receive combined with Ponzi’s natural charisma, even suspicious investors were taken in.

What Ponzi did was to promise unheard of returns to his investors using postal reply coupons as a medium. This does not seem so sophisticated today, but at the time reply coupons were a very popular way to send letters internationally. Once Ponzi discovered the postage rate difference between Italy and the United States, he was convinced he could make large profits exchanging the Italian coupons for US stamps, then selling the stamps. Ponzi quickly discovered that his plan would not work as planned due to fees and other overhead charges. It was then he changed tactics and perhaps remembered back to the bank fraud he was witness to, Ponzi began taking on investors.

With Ponzi preying upon his Italian countrymen, many of whom still had family in Italy, the postal reply coupons were familiar to his victims. Ponzi claimed by using the fluctuating postal rates in different countries and selling these coupons in the United States, he could earn investors a 100% return….in just three months!

In reality, it was virtually impossible to make a profit, let alone what Ponzi was claiming, by exchanging postal reply coupons. However Ponzi was a con-man of the highest order, and as his initial investor started seeing profits, it was hard to argue with his methods. Most of these investors did what most stockbrokers still tell you: they reinvested their supposed earnings. Little did they know that these ‘profits’ were really coming from a steady stream with new victims being brought into the scheme.

How the Ponzi Scheme Ended

Ponzi had made millions by early 1920, he had controlling interest in a local bank and his Boston-based Securities Exchange Company had taken in victims from all over the Northeast United States. He lived well beyond the means of a fraud that was totally dependent upon new investments, Ponzi never even attempted to use his ill-gotten gains to invest in legitimate ventures. When suspicion arose, he quashed it any way he could, even paying out to investors when he had to. In the short-term it looked like he had beaten his doubters and Ponzi was rewarded with even more investors flooding in. But the gold rush was over and now every eye in the investment world was on him, trying to figure out how he did it.

The cracks quickly showed in Ponzi’s facade, it was discovered that he was not even buying the postal reply coupons as he claimed and the United States Postal Service revealed the impossibility of such profits as claimed by Ponzi. He was under investigation by the Massachusetts Attorney General and then a scathing report in a local newspaper by Ponzi’s former spokesman blew the lid of the scam: Ponzi was millions in debt. Major investigations followed and before long Ponzi’s bank was forced into bankruptcy and Ponzi himself would surrender to authorities on August 12, 1920.

Ponzi spent three years in federal prison for mail fraud, Massachusetts then tried him on numerous counts of larceny, finally convicting him, but not before he attempted a real estate scheme in Florida. Ponzi was released in 1934 and subsequently deported to Italy, where he continued he old tricks, even duping Benito Mussolini into giving him a job, stealing from the state treasury and heading for South America. He died in a Brazilian charity hospital in the late 1940’s, impoverished, neglected and blind.

Although the term Ponzi Scheme is a term indelibly etched into the world of finance, the recent scandal surrounding Wall Street big shot Bernard Madoff has certainly raised the bar originally set by Ponzi. Perhaps, as the dust settles from the largest Ponzi in history, these types of frauds will eventually be called Madoff Schemes…

What separates men like Madoff and Charles Ponzi from other tricksters, frauds and con-men is the fact that their types of schemes go after their own kind. The recent Madoff scandal targeted his fellow New York City Jews, exactly how decades before Charles Ponzi used his trusting and in many ways, naive Italian countrymen to initially fuel his own greed. It is this very greed however that is their ultimate downfall and in time, and with much damage, they are all discovered for what they really are.