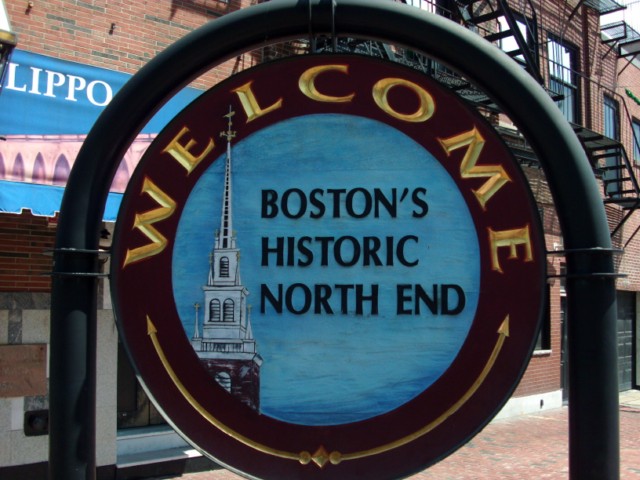 The North End section of Boston was one of the early arrival points for Southern Italian and Sicilian immigrants. Many Italian-American families can trace their American roots back to this small warren of narrow streets and alleyways. These pioneers brought with them local traditions and beliefs, including the festivals they knew from home: after all, being strangers in a strange land, these people could use all the help they could get from their patron saints.

Since 1911, this neighborhood holds a celebration to honor the patron saint of Sciacca, Sicily: the Madonna del Soccorso. 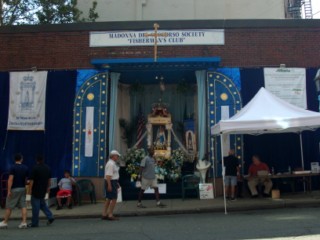 Our Lady of Help has been protecting the citizens of Sciacca since at least the 14th century. She has been credited with curing broken necks, eradicating a plague and stopping an earthquake. Sciacca had a large marble statue commissioned that is still part of the traditional procession in Sicily. Fishermen of Sciacca have a special relationship with the Virgin, since it was the fishermen that struggled to bring her heavy marble statue into Sciacca’s port, in the early 16th century.

Therefore, it was natural for the newly arrived fishermen to want to honor the Madonna del Soccorso just like they did back home, every August 15th.

The North End’s version of Sciacca’s feast includes food, games, gifts, lots of music and of course, the procession. The statue of the Madonna del Soccorso di Sciacca is carried to Boston Harbor where she blesses the fishing grounds, before spending the rest of the feast in a street side chapel. During the Sunday of the festival, the statue is paraded through Boston’s North End for seven hours before the highlight of the festival, the famous ‘flight of the Angel’, takes place.

The Flight of the Angel

The very climax of the Fisherman’s Feast, is a most spectacular feature: a religious spectacle called the Flight of the Angel.

On the Sunday, at the end of the day-long procession, the statue of the Madonna del Soccorso di Sciacca is returned to North Street and the crowds gather under the lights to await the angels. Every year, three young girls are chosen to play the roles of the main angel and two supporting angels. From the balconies above the crowd, the two supporting angels recite prayers in Italian before the main angel emerges from a window and “flies” above the crowd, landing in front of the stature to pray. As she begins her return flight to the upper windows, the crowd roars and confetti streams down from the rooftops.

As the night winds down the statue of the Madonna del Soccorso di Sciacca is returned to her shrine, to await next year’s festival.

The Fisherman’s Feast, which this year will take place from the 14th to the 17th of August,  is just one of several festivals held at the end of the summer in the North End. Shortly after it, you’ll find a two-day festival dedicated to Saint Anthony, another well loved Italian Saint. On Labor’s Day, the first of September, Italian-Bostonians will celebrate Saint Lucy, and finally, on the 7th of the same month, the Procession of Santa Rosalia of Palermo will end the end-of-Summer celebrations in the North End of the city.

It may be roasting, as August is one of the hottest months in the city, but this is still a great time to visit the North End, which is full of traditional bakeries, wine vendors and shops. The food options during the festivals range from street vendors to classic Italian-American restaurants, to modern takes on Italian cuisine.

Although the fishing fleets of Boston and Gloucester can no longer sponsor the festival, corporate sponsorship will allow the Fisherman’s Feast to continue every August, for years to come.