Is there anything better than a bowl of gelato on a hot Summer day? Yes, there is gelato with a lovely Brioche col Tuppo. Learn how to make this delicious Italian brioche recipe!

The traditional Brioche is filled with chocolate, pistachio cream, or our favorite, the crema pasticcera which we’ve got a recipe for too! I am Piedmontese and I live in Liguria, but my next-door neighbors (and good friends) are from Sicily. Last week, when the first real heat hit the riviera, they went out, bought 2 pounds of fresh gelato from this to-die-for gelateria next door to us, and started baking. Baking what? With gelato?!

Well, “for” gelato, really. In Italy, in Sicily especially, we love eating ice cream as a filling for soft, sweet buns called brioche con il tuppo. You may be familiar with french pain brioche, which is however less dense and sweeter than the delicacy we are going to show you how to make today. The brioche con il tuppo is like sweet bread: it has the same consistency, and the right level of sugary goodness to accompany the most delicious of gelato without making your deserved treat too sticky or heavy.

This is a truly traditional Sicilian recipe, with ancient origins. Even its name is rooted in tradition, as it recalls the old-fashioned hairstyle women of the island used to wear: a bun kept low on the nape of the neck, “il tuppo”, which look exactly like these brioches, made with two different sized balls of dough baked one upon the other.

This brioche recipe is unique, as it is deliciously filled with gelato, but also dunked into an ice-cold coffee or almond granita (the Italian version of slushy!), maybe topped with whipped cream.

I had mine last week with a mix of pistachio, cherry, lemon, and vanilla ice cream: cut the brioche in a half and just fill it with spoons over spoons of gelato! Are you ready? Here’s the recipe for Brioche col Tuppo! 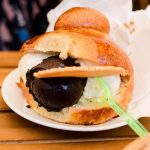 The brioches should be consumed within 24 hours as they are best savored fresh. However, they can be frozen and kept for longer this way.
0 0 votes
Article Rating
Subscribe
Login
0 Comments
Inline Feedbacks
View all comments