Edoardo Bosio and Soccer in Turin

Edoardo Bosio was born in Turin in 1864. Popular in the Societa’ Canottieri Armida, Eduardo had a diploma in accounting and because of his occupation as a merchant for a British textile industry he was given the opportunity to live in England and consequently be associated with the early soccer interests of that country. 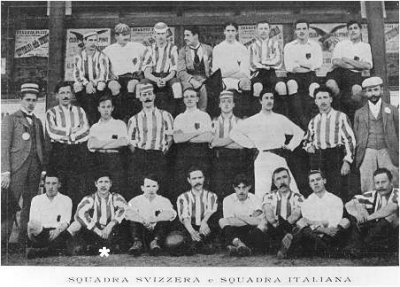 He made his Turin come back in 1887, bringing along some football memories – those green English fields impossible to forget and few leather balls (unknown object in late 19th Century Italy). Motivated by his newly acquired pastime he wanted to spread the sport played by the English within his city walls and thanks to his dedication in that same year a new agonistic group was born. This fresh group practiced boating in the summer and soccer in the winter.

A few years later in Turin of 1889, another soccer group was formed by the name of Team of Nobles, so called because institutionalized and composed by various nobles of the city – it was captained by Abruzzi’s duke and by marquis Ferrero of Ventimiglia.

In 1891 both teams fused into one, creating the first ever group to practice the English discipline from its source. It was called the International Football Club of Turin. The team had nobles in the field along with workers from a farm specialized in the production of optical products.

In 1894 it was time for the Football Club Torinese to emerge and in 1897 to form its own ‘soccer section’ will be the Reale Societa’ Ginnastica Torino, first Italian society of gymnastics, born in 1844 with the intent of teaching gymnastics to the pupils of the Accademia Militare. In 1900 the Football Club Torinese absorbed the Internazionale Football C1 and the first matches were played in Piazza d’Armi, Valentino and later on in the old Stadium.

Contemporarily, the first city to be interested in the new English discipline was Genova. The great Mediterranean port and ideal place for commercial trades became also a resort for English merchants and sailors to immerge themselves in improvised soccer challenges, therefore captivating the local spectators’ attention. The Ginnastica Sampierdarenese, founded in 1891, opened its respective soccer section in 1899 and on September 7th 1893, followed by English Consul General Sir Charles Alfred Payton in the Ligurian city was born the Genoa Cricket and Athletic Club. Three years later the English James Richardson Spensley started the team’s own soccer section, and on January 2nd 1899 changed society’s name to Genoa Cricket and Football Club – becoming the first official Italian soccer team. Soccer was finally born.

Introduction by By Alfredo Iannaccone

In the early period of Italian football ( Italian soccer ) , most of football ( soccer ) teams played for the FNGI (Italian Federation of Gymnastics) instead of FIF events (or indifferently for both federations). FNGI organised annual Concorsi Federali di Calcio (official Italian championships) sometimes inserting that events in the three-yearly Concorsi Nazionali FGNI, a sort of national Convention of all sports (like Olympic games). The necessity to perform a lot of different sports was the reason for their seasonal placing (summer or early autumn) in order to have dry fields to play. FIF Championships were rather played in winter time.

In the FNGI Championships there were also some different rules like half-times of 30 minutes and extra-times of ten; a strange rule stated that the Referee did decide the winner, in a tie-match, awarding the more fair-playing team. The FNGI decision to organize an Italian Football Championship was taken in 1900 (November, 3rd) during the 13th Federal Council in Vicenza. They decided to organize national football games and also national Championships of Tamburello (a sort of Italian “pelota”) and Palla a Sfratto. In 1903 (May, 6th) the Commissione Giuochi adopted the British official football rules. In 1904 (June, 2nd) in Firenze there was the first Italian Football FNGI Championship.