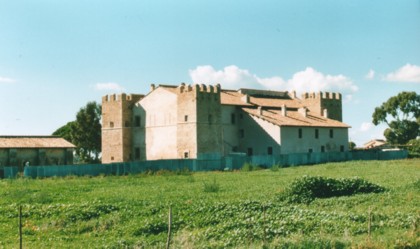 Castellaccio of Monteroni is one of the most important historical monuments of the town of Ladispoli. The castle is actually a fortified farmhouse built during the Middle Ages close to the ancient route of Via Aurelia. The castle is located in the heart of the Monteroni archeological area, which has several large Etruscan mounds.

The castle is a very rare example of a fortified farmhouse. Located 35 km from Rome, many tourists from all over the world visit it throughout the year. The castle was built near the road in the 14th Century and speculation has it constructed over other ancient structures. In the 15th Century, the structure belonged to the Saint Peter Basilica, and in the next century it belonged to the Marquis of Riano.

The main structure has been restored and enlarged several times since it was first built. There are crenelated towers at all four corners of the structure, each equipped with battlements. Over the years, the castle was used for several purposes, such as a restaurant, hotel, and station parking, until it was handed over to tenants and sharecroppers during the last war and used to house the town’s displaced families.

Over the centuries, the castle was converted and used for several different functions. It once served as a post office and also as a tavern and hotel for tourists travelling between Civitavecchia and Rome. The Saint Paul of Cross is located within the castle walls and George Dennis, who a romantic traveler, along with other important people such as Giuseppe Gioacchino Belli, Duchess of Sermoneta Donna Teresa Gaetani, and Luigi Canina were all taken by the beauty of the castle.

During the 1950s, the castle was also used as a set for a few scenes from the movie “The Great War” (“La grande Guerra” by Monicelli ) starring Vittorio Gassman and Alberto Sordi.  At the end of the Second World War, the castle was occupied by several tenants who continued the historic uses of the castle linked to the countryside, including agriculture. In the late 1960s, the castle was abandoned and suffered quite a bit of degradation:  a few parts of it even collapsed, as the structure was used by immigrants and other people as a residence.

Restoration of the Castle

It wasn’t until the interest of the various volunteers of Ladispoli, GAR Cerveteri, which was led by Gino Ciogli, that restoration of the castle began. The castle had been an important part of the town’s history and it was decided that something should be done to save it. Various initiatives were instigated by the archeological group in order to make the citizens of the town and the government aware about the problem. The government then intervened directly and organized a cleanup drive for the entire premises. The upper floors were locked to avoid any further damage and other expenses were taken to restore the castle. Over the years a significant amount of money was made available for restoration of the structure, to which even Lazio and Rome contributed.

Plans have been made to convert the castle to a civic museum of the town of Ladispoli and to use it for tourist or cultural activities.  Recently ( in 2009 ) the castle became property of the ‘Comune di Ladispoli’ and the restoration project started ( if you understand Italian please look at the video) .

Ladispoli is a small town in the region of Lazio in the Rome province,  and occupies a place in the ancient Alsium area. It was the port for Cerveteri, which had been an important Etruscan city, and was later an important Roman colony cited by Cicero. 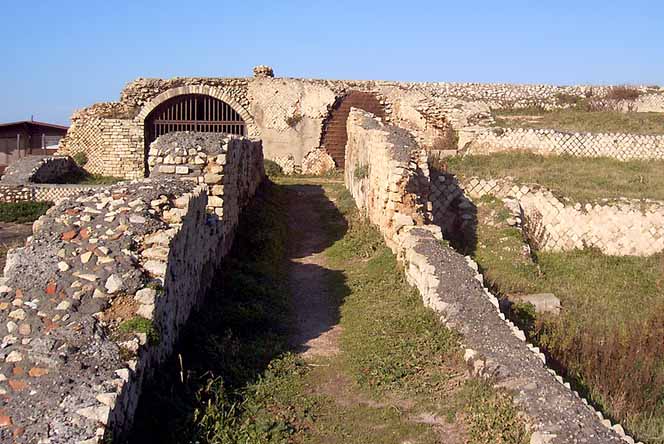 The ancient city of Alsium was destroyed in the 6th Century during the Gothic War by Totila, who led the Ostrogoths. Later on, a castle was built in the area, which had been a fief of Orisini and then of the Odescalchi family.

The modern town of Ladispoli wasn’t founded until 1888 by Ladislao Odescalchi, from whom the town takes its name. Many parts of the town served as a refugee camp during the 1980s for emigrants from Soviet nations who had been seeking religious or political asylum in the western countries.

The main sights in the town, other than Castellaccio dei Monteroni, include the Etruscan necropolis of Vaccina and Monteroni, the Villa di Pompeo, castle of Palo, which was built in 1132, and a botanical garden.

The Castellaccio dei Monteroni has been home to several famous people over the centuries, including Giuseppe Gioacchino Belli, a Roman poet. Saint Paul of the Cross, who founded the Passionist Fathers order also stayed in the castle. George Dennis, who was known for “Cities and Cemeteries of Etruria” and had been an English traveler, once stayed in the castle for a short time, and Luigi Canina, a noted architect, had also been to the castle.