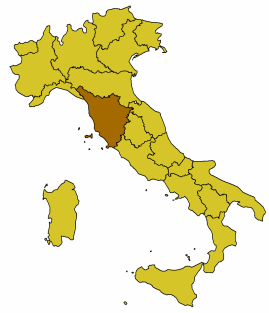 Tuscany was founded by the Etruscans in the 11th century BC. The region was originally called Etruria and constituted the majority of the area controlled by the Etruscans. Most of what we know about the Etruscan people was learned from archeological data collected in Tuscany. The complex culture of the Etruscans and their appreciation for art, beauty, and the Greek style of democracy led to peaceful people’s defeat. In the third century BC the region came under the power of the Roman Empire and was renamed Tuscia. After the Roman Empire fell the region was invaded by several peoples including the Goths, Lombards, Byzantines, and Franks. In 1860 Tuscany became part of Italy.

Tuscany is divided into ten provinces: Arezzo, Firenze, Pisa, Siena, Lucca, Pistoia, Grosseto, Massa Carrara, Livorno, and Prato. Tuscany has a population of nearly 3.5 million and covers an area of about 23 km, making it the fifth largest region in the nation. The triangular shaped region is bordered by Liguria, Emilia-Romagna, Marches, Umbria, and Latium. It is bordered by the Tyrrhenium Sea on the West.

Regions and Cities in Italy, Tourism