Summer is time of “sagre” in Italy, because what’s better than traditional food enjoyed in a balmy evening, immersed in a friendly atmosphere?

What you may not think about is the whole lot of work that lies behind these events: months of planning, days and days of cleaning, both before and after, costs, coordination of -often not- numerous volunteers who may or may not be that apt to carry out the tasks they’re given… And the ubiquitous, dreaded “last minute drama” that, I can guarantee you, always sneaks in between a veg prep session and another.

The reason I know about all this stuff is because, for the past three years, I have been helping out during the three-days long Sagra di Sant’Anna in the town where I live, Pietra Ligure, on the Riviera delle Palme. The sagra is organised by the parish and I’ve been regularly enlisted to chop tomatoes and peppers and, during the evening, to take care of the pasta station.

This year I found out that eyeliner I spent a fortune on for my birthday was worth every cent because, even after hours of sweating and  hot pasta steam hitting my face, it didn’t budge one iota.

Nevermind that, though, this isn’t a make up review.

So yes, I’ve been helping out at the sagra.

Things went pretty well and the food, I must say, was delicious: fried anchovies and calamari, focaccini  (Ligurian fried bread dough), roasted sausages, ravioli al ragù, trenette al pesto, watermelon, crostate. But the absolute winner of this food bonanza were, without the shadow of a doubt, the trenette al sugo di pesce spada prepared by one of the ladies running the whole show, Annalisa.

People kept on coming back to say how good they were and we struggled to keep up with requests. By the final evening of the sagra, many had come to try them because their neighbors at the beach told them to do so. A total success.

Pesce spada, in all its declensions, is a typical ingredient in Ligurian cuisine and, more in general, in that of all our seaside regions. My neighbor is from Naples, lived most of her life in Sicily and she also counts pesce spada pasta sauce among her kitchen favorites.

As the recipe for this sauce is relatively straight forward, I thought of adding it here: you’ll see, you don’t need strange ingredients or any particular culinary skill to prepare it, yet, it’s bound to wow your guests.

I chose “trenette” here, but you can really pick whichever pasta  you like. This sauce is fantastic with short pasta like penne as well, and paccheri are a favorite in Campania. As we always say in Italy, you should refrain from putting parmesan on it, as cheese on fish based pasta dishes is a bit of a no-no…but hey, if that’s what you like to do, go ahead! 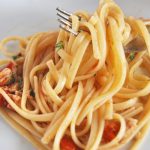 This sauce should be enjoyed straight away and shouldn't be kept for more than one day in the fridge.  If you'd like to give it an extra kick, you may like to add some salted anchovy fillets to the tomatoes, or some fresh thyme and mint.  White wines are preferred here. You should go for something light and not too sparkly. Bianchetta Genovese DOC, Melissa Bianco DOC and San Vito di Luzzi DOC are all good matches.
0 0 votes
Article Rating
Subscribe
Login
0 Comments
Inline Feedbacks
View all comments