A lot of Italian festivals are linked to Catholicism and this is also the case for the Infiorata. The event is rooted in religious tradition and it was first organized in Rome. Benedetto Drei and his son are considered the first promoters of the custom of using the flowers from Saint Peter’s Basilica to reproduce mosaics by cutting and placing each flower in a particular way.

It seems this tradition was inaugurated in 1265 and gave start to a real trend, which has evolved throughout the years into a real artistic event taking place in occasion of the Catholic feast of the Corpus Domini. Flower petals are gathered and placed so as to form particular drawings, geometrical or not, and become scenery to processions and religious events. Real representations of religious subjects are introduced in the streets, a far more creative and inspirational approach than the usual throwing of rose petals witnessed in the rest of the country.

Several towns, especially in the regions of central Italy, organize infiorate, but the most famous  remains that of Genzano, where an area of 1900 meters is covered with twelve flower paintings. The infiorata of Genzano is not only known  for its prestigious creations, but also because it is the most ancient and boasts more than 110 infiorate organized in the course of the years uninterruptedly, as demonstrated by photos and documents kept in the local archives. One of its main characteristics is the use of only fresh flowers, whose colors are not enhanced by dyes or chalks. These amazing creations are usually made directly on canvas-like clay areas, where the basic drawing is either etched with a nail or stanciled on with molded papers, just as it happens for frescoes. Flowers are then used to complete the drawing. The town has been protagonist in the field since 1778 without interruption, not even during the two World Wars. There are, nevertheless, other towns known to organize infiorate during the year: Bolsena, Spello, Gerano, Morolo, Genazzano, Poggio Moiano, Pievepelago and Scarperia. All infiorata are held in occasion of the Corpus Domini, in June, except from the one if Gerano that is held at the end of April, the one in Genazzano, first Sunday of July and Scarperia end of May.

The streets to be decorated are chosen in advance and usually match the path of the Corpus Domini Procession. The idea is to create a real path where colors and nature are the main factors. This event requires the participation of all town people, each with a different role in the management and planning of the celebration.

Though seemingly destined to religious people, the infiorata is actually a pleasant, interesting event for everyone, as people are invited to participate and help in the creation of the mosaics – if artsy enough!- as well as simply enjoy watching and taking in a century old artistic technique. 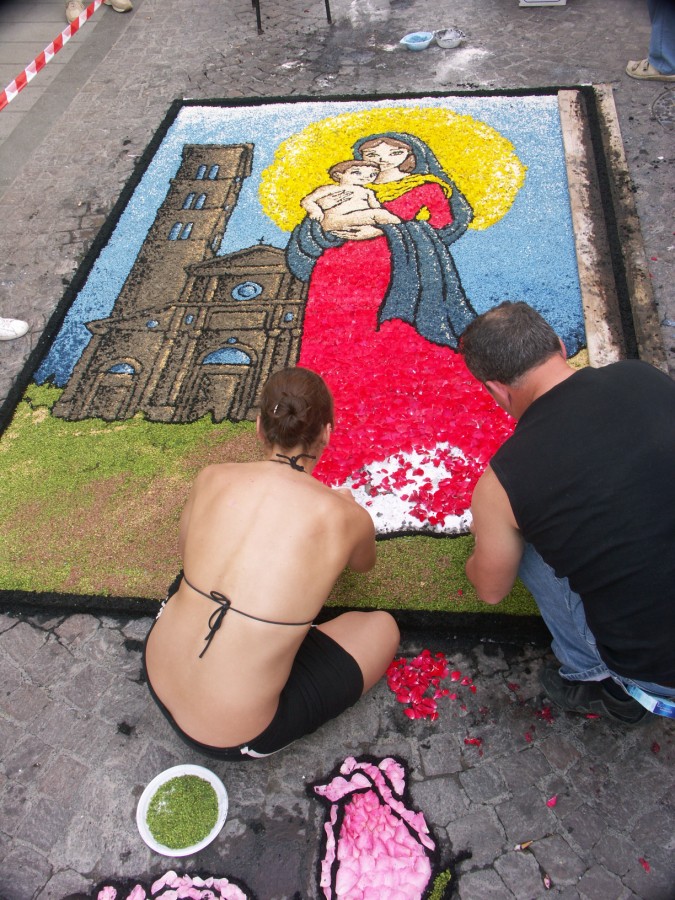