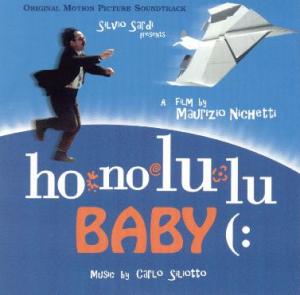 Alberto Colombo, played by the ‘Italian Woody Allen’, Maurizio Nichetti, is a man with a boring life. He’s an engineer for an Italian corporation that wants its employees to speak in English. He is married to a beautiful woman, Margherita, played by Portuguese actress Maria de Medeiros. She wants to move ahead in her career and is trying to speak English at home too. He wants children; but, she doesn’t want sex. Alberto, a character that Nichetti first introduced in his 1979 film, Ratataplan, wants some excitement, some adventure. He asks his wife if she’d like to go to Honolulu with him. She doesn’t.

Almost immediately thereafter, Alberto is thrust into a new situation. He’s being sent away to Melancias, which is somewhere in South America. The problem? Former employees who get sent to Melancias don’t return.

Yes, there’s something about Melancias. Alberto expresses his concern to his wife. She tells him to be a warrior. She wants the father of her children to be unafraid. This seems to convince him to go. Alberto, who’s prone to daydreaming, gets on the plane. He lands in some strange, desolate, desert-like location where he meets Cri Cri (French actor, Jean Rochefort). From Cri Cri, Alberto learns that Melancias is not a perfect place. There are only women there. Alberto doesn’t see why that’s a problem. In fact, how many men would – at first?

Alberto is a hot commodity from the moment he sets foot in town. He is staying at a hotel of sorts where Marilda and her cohorts make him feel very much at home. Alberto tries to remain faithful to his wife, Margherita. Margherita, at the same time, is learning English from one of her co-workers. He’s more interested in teaching her things besides English, however; and, the two have an affair.

The phone calls between Margherita and Alberto show them dealing with their own difficulties and temptations while trying to show that they still care for each other.

As time wears on, Alberto learns that it’s futile to resist the charms that Melancias has to offer. A beautiful red-haired woman strips naked. The two have sex. Then, well, Alberto is lost. He enjoys his time in the hotel much more after that. He also calls his boss, Mr. Anselmi (Renato Scarpa), to ask for first more time and then tubes. Mr. Anselmi and his secretary (Dorotea Brandin) think that he has found oil; although, Alberto only says MAYBE. Not yes. Just maybe. It’s not yes; it’s not no.

During this party Alberto’s girlfriends, who he has found ‘husbands’ for, go into labor. Alberto keeps boiling water. At the end, he has seven babies. No wonder he decides to return back to Rome, his job and Margherita shortly after.

Once home, he realizes he has to face the music. He tells Margherita of his affairs. She tells him of hers. They make amends. He tells her of his children. She says the children belong to both of them. It’s such a nice, cute, overly happy ending, right?

Not quite. Alberto must go to work and tell Mr. Anselmi that there is no oil. He does. Mr. Anselmi is very angry. Together, they go to see the big boss. Mr. Anselmi makes Colombo take full responsibility for this. He does. Luckily, for Colombo, the big boss is thrilled. As CEO, he’s been nominated for the Nobel Peace Prize. Yes, the water they brought to Melancias was deemed a good, unselfish, un-corporate-like deed. The Ministry of Finance also gave them a break on taxes for a whole year.

Colombo is a hero and is now given his reward – yes, he’s regional manager of the company’s South American operations. He’ll be based in – where else – Melancias!

Upon his return to Melancias, Alberto sees Cri Cri again. Cri Cri flirts with his wife. Alberto asks him why the women of Melancias are no longer enough for him. Cri Cri has a surprise for Alberto. There are no more women in Melancias. They left.

Now, there are only men there. Alberto is left holding his babies while his wife is carried off by the ‘husbands’ of the women he got pregnant.

Honolulu Baby is a wonderful comedy. It’s light-hearted, funny, a bit satirical and a great way to spend an afternoon. You should definitely take a chance on this film and on Maurizio Nichetti. Neither will disappoint.