A Review of this theatrical black and white film 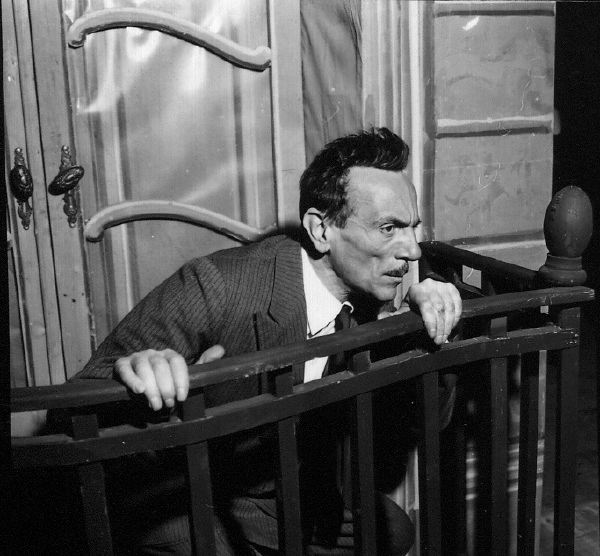 This is a film featuring fascinating pieces of magic! It is classified as theatrical, and was put into black and white film by Eduardo de Filippo in 1954. The production of “The Ghosts” leads its players to stumble into illusional games both large and small – they are conjured in all different ways, and get tossed together in a comedy that is among the most beloved and fortunate of Eduardo de Filippo. The film attained an international success only a few years after its first debut, with stage production by Giorgio Strehler.

Pasquale Lojacono  – who is the protagonist of the film – believes that there are ghosts infesting his house, or maybe he had hallucinated all this. It is a perfect balance between comedy and drama – entangled with vagueness and paradoxes.

The film is set in a 17th century depilated Neapolitan building where wondering ghosts supposedly dwelt. Pasquale Lojacono and his young wife Maria both moved into this building in the hopes of a nice life.

Maria is unaware that her husband Pasquale had made an agreement with the owner of the building and in order to live there rent – free, he had to dispose of the rumours that this house was invaded by ghosts. Pasquale is later influenced through a casual meeting of his wife’s lover, Alfredo. He thinks that Alfredo is one of the ghosts dwelling in his home, (or forces him to believe this was an illusion, in fear of the pain of betrayal).

Alfredo starts to send gifts and money to Maria – he desired her greatly, and wished for her to live a life of luxury, the life she deserved. Pasquale the naÃ¯ve begins to accept his presence in the house. He is grateful to his “fellow ghost” (as he sees him) without questioning anything. And Maria is finally worn out by her husband’s foolishness, so successively runs off with Alfredo. But Alfredo’s relatives were religiously against this scandalous adultery, so they pay a visit to Pasquale and inform him about the situation. The maddening fact is that, he still didn’t want to believe that any of this was real; maybe he had fallen into denial, and wondered if they too, were ghosts themselves. When Alfredo and Maria’s immoral relationship came to an end, the gifts and money sent by Alfredo slowed to a halt, and Pasquale was reduced to pure misery. His only hope was that the ghost would come back, so he could ask him for help.

Anyways, Alfredo had come back due to craziness for lack of his desired Maria (as he could not go very long without seeing her) so he returns after two strenuous months. Pasquale welcomes him as if he was his savoir, and it was at this point that Alfredo breaks down and falls to Pasquale’s feet, pleading with him for Maria. During his begging session, his love for her was revealed, along with his ability to provide her with a decent life. Pasquale finally realizes what’s going on. He had been a victim in saving face for a curse of public opinion. In the end, he pretends to kill Maria, in which she is convinced of her husband’s good faith.

Italian law states that murders occurring on behalf of an “Honour of Love,” (which consisted of a provoking leading to the murdering of a loved one) allow a person a few years discount on his sentence in prison. Once Pasquale got out of jail, he left for Scotland with his wife where he would find a job as a waiter, in a castle infested with real ghosts! The drama sinks down into the social realm, and then demonstrates a contrast between; the rich and the poor.

The disguise of Eduardo de Filippo is visible: in “Questi Fantasmi” there are projections of his consciousness and needs. Maybe man believes in ghosts so he doesn’t have to believe in reality. This reality he clearly understands, but is not willing to accept. The wife’s lover is real, but he dissolves into a patron ghost for Pasquale. The men around him become illusions and help him to survive.

Eduardo Filippo was born in Naples on May 24th 1900 – was the son of actor Eduardo Scarpetta and Luisa Filippo. His first debut was in 1904, and played in “The Geisha” which had to be co – signed by his father.

In 1914, he became a part of a stable theatrical company along with his stepbrothers, and it continued to run until 1920. He was then called into the service. A few years later, when his term had ended, he returned to his beloved stage.

In 1931, he formed a comedy theatre with his brother Peppino, and sister Titina, which was in operation until 1944. During this time, they produced “Christmas Cupiello House” in 1931, and “Who is the happiest one, me?” Meanwhile, they started working on other various activities in the cinema including; “Three Men in Frack” 1932, “The Hat with Three Points” and “Those Two” in 1935. When 1945 came around, they presented yet another; “Millionaire Naples.” Finally, Eduardo opened his own company, which produced the successful film “The Ghosts.”