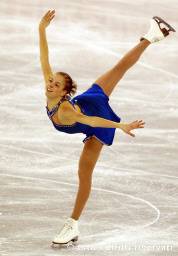 Carolina Kostner was born in Bolzano, Italy on February 8, 1987. Her

mother, Patrizia, was a nationally-ranked figure skater during the 70s

and her father, Erwin, played hockey in the 1984 Olympics and was captain

of the Italian national team. Carolina is the cousin and god child of

one of Isolde Kostner, winner of 3 Olympic gold medals in alpine skiing.

Carolina has two brothers, Martin and Simon. As a youngster, Carolina

lived in the town of Ortisei, a tiny village in the Tyrol region of

northern Italy. At the age of 14, Carolina, who carried the Italian

flag during the 2006 opening ceremonies of the Torino Olympics, moved

to Oberstdorf, Germany so she could attend a boarding school that was

Carolina, who goes by the nickname “Caro”, left home because the

rink she trained at in her hometown had been destroyed by a landslide.

Oberstdorf is only four hours away from her family home. While in school,

Carolina studies languages in the morning. She speaks five: Italian,

similar to French and local to the region where she grew up. In the

At 5-foot-6, Carolina, who was once the paramour of reigning men’s

world champion skater, Stephane Lambiel of Switzerland, is taller than

many of her competitors. She is known for her speed on the ice and her

double axle, which should be easy for an expert jumper like Carolina,

is the one jump that she can’t seem to master.

Alberta, Canada for a few weeks every summer to work on choreography

medal finish at the World Championships in Moscow, beating out Michelle

Kwan. Unfortunately, she was unable to medal in the European Championships

that year. She has said that “the public were concentrating on me and

my emotions won over.”

In Torino 2006, Carolina had a great deal of pressure on her. She

was deemed Italy’s great hope for an Olympic skating medal. At the end

of the lady’s short program, Carolina found herself out of the hunt

on a difficult jumping sequence. She did skate a clean program in the

long and moved up to finish in a respectable 9th place.

Who knows? At 19, Carolina is still young enough to bring home Italy’s

she’s a delight to watch and, you can rest assured that the whole world

will be doing just that for years to come.