It would be hard to think of Italy without coffee. After all it is the national breakfast and the home to coffee drinks that have taken the rest of the world by storm. Without Italy, Starbucks would not exist and without coffee, Italy would grind to a halt. No, coffee was not invented in Italy but coffee culture as we know it did originate here. Today Italy is a country of coffee aficionados who will not tolerate (or visit) an establishment that has bad coffee. Italians will even skip coffee in a restaurant to have one at a favorite bar, it is just that important.

A short history of coffee

Most of the world’s coffee today comes from either South America Italian espresso blend coffee beans or Indonesia (hence the nickname Java), but coffee originated in the highlands of Ethiopia and did not reach Europe for thousands of years. It was not until the 16th century that the introduction of coffee to Europe took place. Coffee arrived from the Middle East where it had achieved a near cult like following, with the first coffeehouses being established in Istanbul. Once accepted by Islamic law (it was very nearly banned, like alcohol) the beverage followed the spread of Islam across Africa and Eastern Europe. Venice, which relied heavily upon trade with the Muslim east, was first introduced to the invigorating liquid in the 1570’s. However coffee would remain a luxury item at this time and not drunk for refreshment, but as a medicinal drink. However once coffee was transplanted to European colonies in Asia and South America the bean thrived and became accessible to the public.

The 17th century saw the opening of the first European coffeehouse in Venice, which later spawned over two hundred others along its canals. Coffee spread quickly at this point and other coffeehouses were founded in the major cities of Italy. Some of these dignified and elegant establishments are still in existence in Venice, Turin and Rome; virtual palaces to the national stimulant. But in the end it all depends upon the coffee itself and not where you drink it. 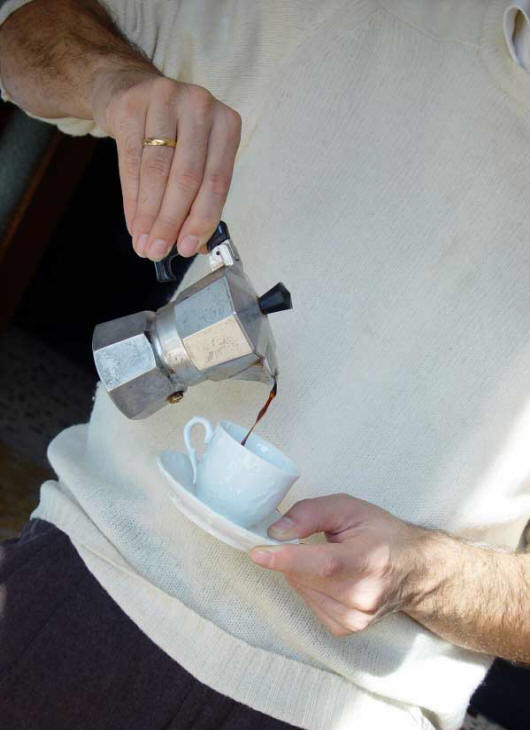 Good beans make good coffee, it is that simple. But to make great coffee it takes a master to blend and roast the beans properly. Italian coffees use mainly the Arabica variety of coffee bean, known for its full flavor and low caffeine content. However depending upon the region and particular tastes, the stronger and caffeine rich Robusta beans are blended with Arabica. The blends of the south tend to have more Robusta content in their blends which makes for a stronger espresso.

Unlike French roast coffees, which are dark and very oily, Italian roast coffee is a rich brown color and should have very little or no oil on the beans. Roasting time depends upon the blend as Robusta beans need to be roasted longer than Arabica blends. The coffee roaster is a master craftsman that must treat each batch according to the beans being used, taking great care not to roast too long or too hot. A darker roast does not always mean a better espresso and so the roaster must keep a careful eye on the beans during the process since they can burn in the blink of an eye. Once perfectly roasted the beans are allowed to air cool, this allows the beans to retain their flavor until they are ground for brewing.

Grinding of the beans should be done immediately before brewing to ensure the freshest flavor. Grinders that use grinding wheels (like found in Italian bars) as opposed to a grinding blade are preferred since they allow for a more thorough grind. For coffee made for home brewing, the beans are often pre-ground and then vacuum-sealed in small portions to ensure freshness. The grinding level also depends upon what kind of machine is being used to make the coffee. Commercial espresso machines use a very fine grind that creates its own filter when under the high pressure of the brew cycle. In contrast are some home brewing grinds that are fairly course.

Not all coffee drinking in Italy takes place at the bar, morning coffee is often made at home using a Moka (or caffettiera like in the image). This steel coffee maker that is put on a stove, makes coffee by boiling water to force steam through the grounds. The Moka is the Mr. Coffee of Italy and is the most popular home method. It may not be a real espresso, but it does make a very good full-bodied coffee. Another stovetop method Italians use to make coffee at home is called a Napoletana. It is similar to a Moka except that when the water boils, the whole pot is flipped over to let the water filter through the coffee. It is not as strong as a coffee made in a Moka and is much similar to a percolated cup of coffee.

Once large yet elegant contraptions of copper and brass that had much in common with a steam locomotive, the modern espresso machine is the latest in coffee technology. With a simple touch of a button these high-tech wonders by such well-known companies as Rancilio, Spaziale and Cimbale produce flawless coffee every single time. There are new versions that are completely automated that grind the beans and steam the milk besides brewing the coffee. This technology allows anyone to work in a coffee bar to create masterpieces. However it is safe to say that the best establishments in Italy will never go to this extreme since there is so much pride in making (and drinking) a coffee properly.

Ordering and Drinking a Coffee in Italy

When ordering a coffee in a bar in Italy keep in mind the differences in price. In many of the nicest piazza in Italy a cappuccino can cost four times as much if you sit at a table than drinking it at the bar. Most Italians drink their coffee quickly at the bar before heading off to work, leaving the tables for the tourists. If you try to order a coffee by asking the bartender, be prepared to give him your receipt. In most places you have to pay for your drink first and then show proof of purchase by giving the bartender the receipt. It sounds silly, but it is an effective way to make sure everyone pays for their order.

For ordering an espresso in Italy, you can simply ask for a “caffe” and remember to drink in quickly. Espresso is not made to sip casually, it is made to be drunk in two or three sips at most. Coffee is served by itself and is usually drinken after a meal, with the exception of breakfast. Any coffee after breakfast should not have milk in it and cappuccino orders after 11 am are often laughed at. However there are numerous varieties of coffee drinks that you can order and all are delicious.

This is in no way a complete list as new versions are always being invented or adapted. Here are some of the more popular coffees that you will see ordered in Italy.

Espresso: known a Caffè in Italy, served in a 3 oz or demitasse cup. Strong in taste with a rich bronze froth known as a crema on top.

Ristretto: More concentrated than a regular espresso that is made with less water.

Lungo: An Espresso made with more water – opposite of a Ristretto.

Caffè Americano: A shot of Espresso to which is added some hot water.

Macchiato: Espresso that is “marked” with a dollop of steamed milk on top.

Corretto: Espresso that is “corrected” with grappa, cognac or sambuca.

Cappuccino chiaro: Cappuccino prepared with more milk (but less than a caffe latte) and lighter in color.

Caffe’ latte: Espresso made with more milk than a cappuccino but only a small amount of foam. In Italy it is usually a breakfast drink.

Latte macchiato: Steamed milk that is “marked” (sometimes ornately) with a shot of espresso coffee.

Where are the best farms in Italy to purchase large quantities of cold brew beans?

Having traveled a few times in Italy, I haven’t found a place that served less than excellent caffè. All perfetto. And cheap too compared to those overpriced horrible drinks at Starbucks. Paris coffees aren’t that good either. The Frenchies don’t know how to make good café.

I tried some coffee in Italy and couldn’t find anything good. All they have is dark roast and it was just frankly bad. Makes sense though now why the bartender looked at my funny when I ordered the latte.

Excellent piece and informative. It’s unfortunate that producer countries remain exporters rather than consumers. Evidently, the culture of drinking this invigorating beverage started centuries ago and understably has grown over the years. Unfortunately, very few producing countries adopted such culture and you wonder why. In East Africa, hardly 1% percent of population enjoy this beverage ☕, beside not knowing the different ways in making it. Expresso, remains a speciality for the selected and previleged few. What does it take to build such a profound culture to take advantage of and appreciating this magnificent beverage?
Cordially, Abdillah

PS The cost of a cappuccino at a Bar (not sitting down) in Italy is usually 1 to 1.30 Euro

Hai
How are you
I am start up a coffee cafe basically I don’t have more ideas, I think you can help me more details for developing my caffe

Dear,
I want to get cofee beans in Pakistan.
Can u help me?

Follow my blog with BloglovinwpDiscuz
7
0
Would love your thoughts, please comment.x
()
x
| Reply