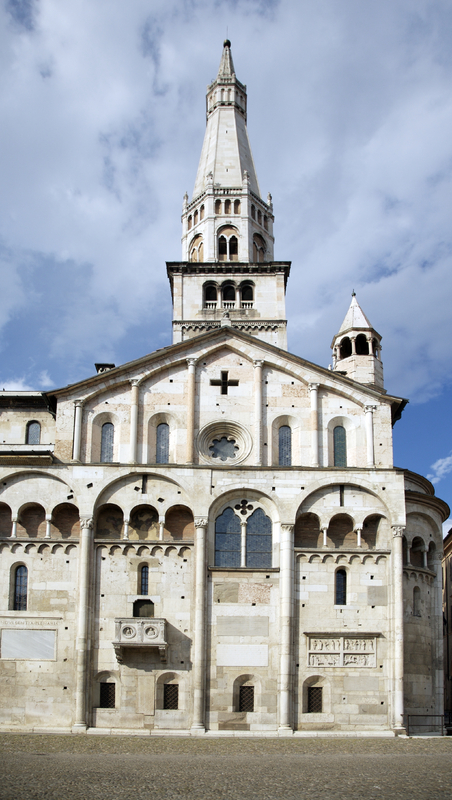 Mutina was proclaimed a Roman colony in 183 B.C., but its earlier history had roots in the Etruscan period. With the arrival of the Romans the city took on a new urban layout, fostered by the great land drainage works, and was connected directly to the main highway of Via Emilia, which became the most important east-west road. It was a prosperous municipality in the imperial era, but with crisis of the empire it began to decline. The wars between Constantine and Massenzio (312 A.C.) and especially the floods, of which the worst was in the 6th century, forced the inhabitants to move out of the city. The hamlet subsequently began to take shape again and in 891 walls were built around it. This was solely due to the tenacity of the bishops, who refused over the centuries to allow the remains of the patron, St. Geminian, to be moved from the ancient basilica where they were kept.

In the 11th century the city became a free municipality.

It took part in the crusade declared by Peter the Hermit and in 1099 the construction began of the cathedral on the site of the basilica. The 12th and 13th centuries found Modena involved in the most important political events of the times (the Lombardy League, the domination of the Swabians, the internecine wars between the Guelphs and the Ghibellines and the defeat of Fossalta), with years of great expansion alternating with years of crisis. In the 14h century there was a succession of different rulers in the municipality, from the d’Este family to the Gonzagas, to Papal domination, until the d’Este family finally achieved power.

In 1598 Modena became the capital of the Estense Duchy.

The d’Este family governed the city almost without interruption until 1796, the year when Ercole III d’Este withdrew from the city in the face of the French advance. From 1796 the French dominated, with alternating fortunes, until 1814. From that year the Austria-Este dukes Francis IV and Francis V governed the state until 1859. With the decline of d’Este sovereignty, the city became part of the Kingdom of Italy.