You have just finished your tasty pasta cooked al dente, and there it lies on your plate: a whole layer of delicious sauce. How could you leave it there, wasted, to be thrown away? Impossible! is the answer many Italians would give to such a question: this is why we love the scarpetta  and cannot quite avoid doing it, even when, as Galateo says, we shouldn’t.

This word can hardly be translated in other languages except if using a whole definition of the action itself: in Italy, the idiomatic expression fare la scarpetta is understood everywhere, but the origins of it are still unknown. Some would say that the word scarpetta recalls a type of pasta used in the 19th century in Tuscany, others say that it is linked to the idea of a little shoe, literally, a scarpetta, taking everything under its sole and cleaning the plate; others still say that it is linked to the Southern Italian word “scarsetta,” meaning poverty.

In spite of its relatively old origins, the word only appeared in the Grande Dizionario della Lingua Italiana in 1987.

This is something that not every foreigner can understand. In itself, the act is simple: it’s just dipping some bread in the leftovers of whatever one has just finished eating. For we Italians, however, there is a whole world behind this habit, and diatribes on whether it is polite or not to do it have been going on since times immemorable: should we or should we not do the scarpetta at the end of a good meal?

After centuries of discussions and thousands of people debating should it be avoided when dining formally,  or embraced fully as a righteous manner to conclude a fantastic meal, it has been eventually decided that doing it is not so much of  a problem anymore.

Even the Galateo, the quintessential set of bon-ton rules that, for a certain time, was considered the bitterest enemy of this ritual, has finally given its verdict: in the end, doing it it’s ok!

True, the Galateo also states that the scarpetta should only find place on more informal tables and one should always use a fork to hold the bread, yet, it’s been a small victory for scarpetta lovers all over the country.

To be honest, nobody really cares about using a fork: most of us rely on our own hands, although yes, we do tend to do it only at home, or at least, only when dining with friends.

No matter if people are from the north, center or south, doing the scarpetta is ubiquitous and equally loved by diners and chefs alike: Italian cooks say there is no greater satisfaction than receiving a clean plate back in the kitchen, a clear sign that people really enjoyed their food. 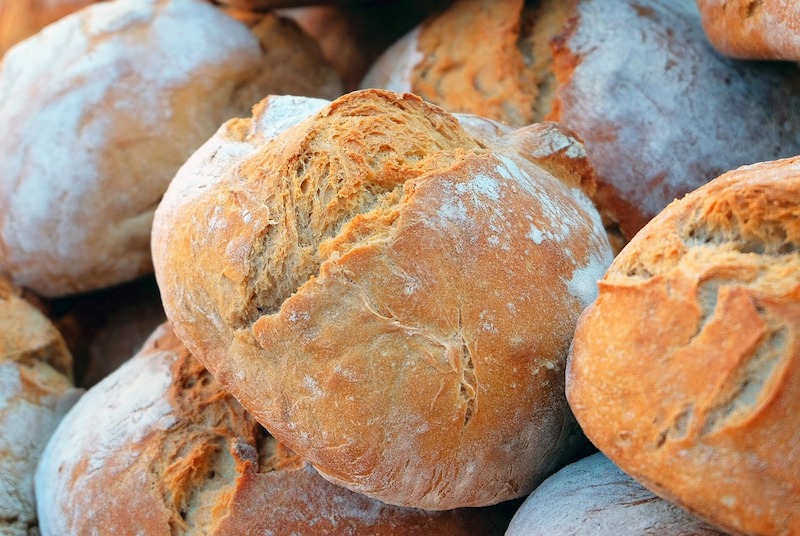 Doing the scarpetta is also, to many, a truly evoking gesture, reminiscent of childhood and times gone by: to a great deal of us Italians, the first scarpetta was handed over by a nonna, who would dip a piece of bread in the sauce still on the stove to let us try it before everybody else. The scarpetta was, then, a little treat, and yet another sign of the undying love and predilection of our grandparents towards us. The scarpetta is not only a delightful thing to do after eating a good dish of pasta, but also a mixture of memories and feelings for most. Well known Italian chefs like Gualtiero Marchesi and Gianfranco Vissani are great supporters and another, Massimo Bottura, has even created a dish to be entirely consumed without cutlery and only with bread: the dish is served in his Modena’s restaurant, La Francescana.

Certainly, there are people around thinking that a scarpetta is an impolite thing to do, yet, it is a temptation that most Italians and many tourists cannot resist: our advice is to give in by choosing the best bread, soft and full of mollica (the softest, inner part of the bread itself), dip it with joy in whichever delicacy is left on your plate and enjoy a truly rewarding and delicious scarpetta!  In the end, among the many eating rules to follow in Italy, doing the scarpetta remains something we glady go against good manners for!

Thanks for the article. Brings back memories of nonna dipping into her gravy and offering it to kids in the kitchen. It was a very acceptable practice in the kitchen, and to insure your plate was void of any gravy at the dinner table.

We Italians have done this all are lives. I, for one, had no idea there was an actual name for it until my wife and I met two young Italian girls in Spain. During our conversation with them (somehow) the topic of doing this came up and they told us “Oh Scarpetta”. We looked at them and had no idea what they were talking about. They then looked at us and had to explain this to us. Since that time in 2012 my wife and I still laugh about it and every time we “Scarpetta” at home or in a restaurant we laugh and think about these two young girls. Thanks so much for posting this. It has brought a smile to my face.

Thank you for sharing these nice memories Rocky Simoni, I like the cake and ice cream 🙂 Life was very difficult in the past, we complain today but it was much harder when our parents were young, and they enjoyed life with the simple things they had.

As a child I was taught this tradition of dipping bread into the sauce by my mother, as I got older and could reach into the pot on my own, I still have scars on my knuckles from the wooden spoon my mother would use to stop me from eating all the bread. Same thing while eating at the table, we used bread and cleaned our plates, after the meal was done, and my plate was clean, she would ask if I wanted desert, usually that consisted of a slice of bread with a thick layer of butter, she called it cake and ice cream. Even after my parents passed, I passed these traditions on to my daughter, she too dips bread in the sauce, sops up the remnants on our plates with a slice of bread, I made up a saying calling it the clean plate club and at 32 she still continues to say that at the end of a meal. Traditions live on!!!

As a first generation Italian I have wonderful memories of breaking off a piece of Italian bread never cutting the bread with a knife and dunking in my mothers sauce pot, its was commonly known a a gravy sandwich

We did it every Sunday after church, we could not wait , her homemade bread cruchey enough to drive a nail and as soft as cotton inside. Thanks for the memories. I miss that, all the family would be there and Gram gave us ONE meatball to share

my brother Tony God rest his soul every time I was cooking sauce he would sneak into the kitchen and be dipping bread in my sauce and stealing a meatball and I would holler at him ..God I miss that

I love TRADITIONS… it warms my heart to read these comments. It brings me back to happy and loving memories when all my cousins, aunts and uncles would meet at grandma’s house for the holidays. All we did was eat, drink, laugh, play games and cards and tell stories… Oh what great times we had! Such treasured memories!! Thank you… La Familia

I do it all the time. I just did it last night with the juice from my steak.

I find this so interesting. My husband is Italian and I am sure he didnt know how this tradition started or the compliment it is to the person who prepared the meal. He is third generation in this country. Some traditions get lost in time. We will certainly pass this tradition meaning to our kids

My grandfather did this growing up and I did as well. My grandmother would always be so mad saying my grandfather was in the kitchen eating to much bread.

I au paired in Roma for a year and the mom there told me it was bad manners and uncouth when I did it (although the dad would do it when his wife wasn’t looking.) I always thought it was a waist of good sauce.

Thank you all for your inputs as I’ve learned and enjoyed. I’m a Dutch & Polish male with a Hugh love for Italian everything ( food, women, cloths, cars ). I’ve been scarpetta-ing my plates for 59 years and I’m 59 now. Lol. Hope the world finds this tradition a true compliment to the culinary arts & industry. “Las Vegas”

In Texas we call it ‘waddling your dodger in your sop’.

We Kids of Italian descent always cleaned our plate with the bread…. but nit knowing it had a formal name …..La Scarpetta… and if we came home and the sauce was on the stove simmering… we grabbed bread and dipped it into the sauce….. just an Italian ritual….. still do it!!!!!’

Having lived in Italy in Emiglia where my grandparents are from, it’s almost ritualistic. CUCINA POVERO! IL migliore!
Just enjoy. Black 👔 affair is different set of rules..in any culture.

my grandfather, born in 1882, would poor karo syrup on the food remaining on his plate and would sop everything up with a slice or more of bread. He was from the country outside of St Louis Missouri and his ancestors came from England. 😊

Although not Italian, my “American” (English/French/German) family has the same tradition of wiping up sauces or gravy with bread…we always called it “soppy”. Best part of the meal! (To the point we would take a second helping of sauce, just so we could soak it up with bread!)

The bread and sugo compliment each other ,a match made in heaven.
It’s the best compliment you can pay to your host.
I probably wouldn’t do this in more up market restaurants but then I’d probably avoid such establishments. Real Italian food is mostly uncomplicated and fantastic ,we’ll leave the fussy food to the French they seem to like that sort of thing.
We talk with our hands, eat with our hands and on occasion do both at the same time .
Forza la scarpetta!

Having just returned from Sicily where I learned the phrase and the true art of scarpetta, I can say it became a ritual, encourage by our hosts, our tour guide
and even chefs I had the pleasure of cooking with. The bread in the sauce
gingerly scooped from the bottom of a plate or bowl brought much joy.

Hi Scott, the “slow day at the office” comment made me laugh so I read the article to see if I should remove it. Well, I agree that for non-Italian means nothing but for us I discovered something the author pointed out: In Italy while I was growing up my mother and father taught me that fare la scarpetta was considered vulgar and only the poor / ignorant people do it so I was not officially allowed. Now the article shows instead that the Galateo ( Galateo: The Rules of Polite Behavior ) decided that La Scarpetta is ok….. now I have to tell mom that she was wrong ..haha – We all have rules like the Galateo for example making lots of noise while having soup maybe ok in China but not so ok in a fancy restaurant in the US.

Wow. What a concept. No, any foreigner wouldn’t understand the concept of wiping the plate clean with a humble piece of bread. Slow day at the office?

Follow my blog with BloglovinwpDiscuz
23
0
Would love your thoughts, please comment.x
()
x
| Reply