Universal Expo of Rome – An oasis in the city

EUR is one of the most beautiful and modern residential areas of Rome. It was commissioned by Benito Mussolini during the fascist era and was originally known as ‘Quartiere Europa’ (Europe’s Quarters, or E42), but is better known as E.U.R. – Esposizione Universale di Roma (Universal Expo of Rome). Its modern and rationalist architecture makes it one of the most outstanding living areas of Rome, some even call it the Vancouver of Rome! This 32nd area of the city, is the only self-administered neighborhood in the city of Rome (E.U.R. SpA).

EUR was started in 1935 to celebrate the fascist ‘Marcia su Roma’ (Mussolini’s march on Rome – 1922), planned for completion on the 20th anniversary in 1942. Its development and the planned exposition was suspended due to WWII, but construction resumed in the 1950’s.

Of all the monuments within EUR, the Palazzo della Civiltà Italiana – Palace of Italian Civilization – is the most famous since it looks like a squared coliseum, earning the nickname Colosseo Quadrato. When current restoration efforts are completed it will host the State Audiovisual Museum and State Record Library, with a section containing newspapers and magazines. The so-called Colosseo Quadrato will also host two permanent exhibitions on Italian Design and Italian wines as well as various cultural activities.

– Palace of Congress: The project was inspired by the Fascist-Roman ideology of the times. It was proposed in 1938 by architect Adalberto Libera.

– Central State Archives: Holds documents from the 800’s to today and its also used for art exhibits.

– Guglielmo Marconi Obelisk: A large stela in the center of the Cristoforo Colombo highway, dedicated to the inventor of the radio.

– Church of St. Peter and Paul: This church with its large dome, was originallybuilt to be Mussolini’s mausoleum.

– The ‘Fungo’: This mushroom shaped construction was originally a water tank. It is now a restaurant/pizzeria with a 360° breathtaking view of the surrounding area.

– Museums: The Museum of Roman Civilization, the National Prehistoric and Ethnographic Museum, and added in 2004, the Planetarium and Astronomical Museum.

– Ministries: EUR is home to the General Italian Post Office, Ministry of Communication and of Environment, Italian oil giant ENI, the Bank of Rome and many others.

– Obelisco Novecento: By sculptor Arnaldo Pomodoro, an obelisk dedicated to the 1900s, installed in 2004.

– Pallottomatica: The former ‘PalaEUR’, a sport palladium for the 1960 Olympics, hosts main sports events like boxing, and other art and musical events.

The Amusement Park and the Lake

The amusement park was built in 1953 as a temporary structure but today it has become the oldest amusement park in Italy. It has 200 family-friendly attractions and will open to the public once restoration is complete. The artificial lake is just gorgeous! Surrounded by gardens, it spreads from one side to the other of EUR and was used for rowing competitions during the 1960 Olympics.

The lake hosts in the summer, classical music concerts with a scenario of water works such as, tall gushes of water rising from the lake’s center with illuminated water falls as a background, all synchronized by the music. The lake also has bars and cafe’s: one is the famous Giolitti, known for its gelato. Another is right on the lakeshore where, between a sandwich and a drink, you can rent a pedal boat and float around the lake. The lake is also home to events such as fishing tournaments, model-boat shows and even a sailing school.

– Torre Giardino: Garden Tower by the famous architect Renzo Piano. It will host high luxury housing, offices and other commercial activities. It will be ten stories high and will enclose a winter garden as well.

– Centro Congressi Italia: Designed by the world famous architect Massimiliano Fuksas. It was renamed, due to its futuristic shape, the ‘Fuksas Cloud’.

– Mare Nostrum Aquarium: When completed, will be a virtual water tank. Second only to the one built in Tokyo, Japan

– EUR will also host the Formula1 Grand Prix of Rome. The circuit will extend for about 5 Km. Around the lake and the Pallottomatica and will be ready to operate in 2012… an Italian Monte Carlo! 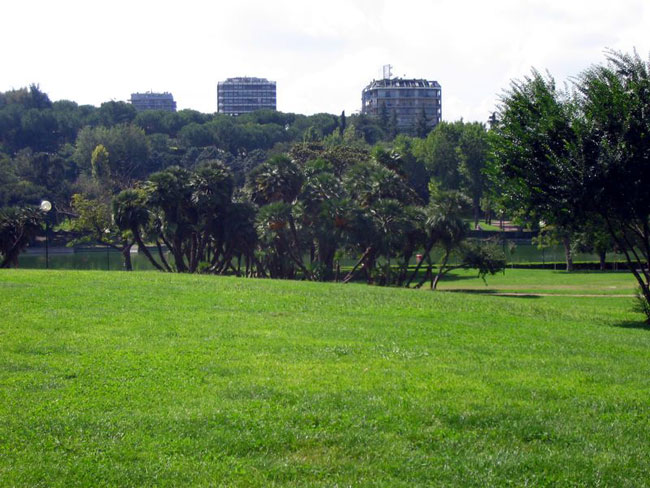 EUR also was a background for movie directors such as: Fellini, Antonioni, Dario Argento and others. Actors like: Mastroianni, Bruce Willis, Andie McDowell, Anthony Hopkins and Christian Bale had the pleasure of working and enjoying EUR. Commercial spots and music videos are also produced in the area.