These are the times of “bufale.” Or fake news, as they are most commonly known outside of Italy. We live in a world where the internet and social media dominate the way we live and communicate. This has certainly opened a plethora of professional possibilities and has been helping scientific and academic researchers all over the world to make their work quicker and more accurate. However, as it often happens, there is also a less positive outcome to take into consideration: the internet gave an easy-to-access platform for people to put out their opinions, passing them for true facts. The consequence of it? Well, the proliferation of misinformation and fake news. In Italy, we call fake news “bufale,” that is, “female buffaloes.”

The Accademia della Crusca, the country’s most revered linguistic institution, traces it back to the expression “menare per naso come una bufala,” literally meaning to “drag someone around by the nose like a buffalo.” The idea is that fake news drag around the gullible just like farmers used to do with their animals. According to other sources, the saying comes from the name, “bufala,” of old traditional fancy dress parties held in Tuscany, where pranks and humor were common.

Regardless to its etymology, “bufale”  are very much here to stay, but we often fail to realize they’re far from being a modern phenomenon. You see, fake news are a bit of a historical topos, that tended to appear with more or less regularity throughout the centuries. Enter the kings of Rome, Galileo, Julius Caesar: it’s high time to debunk some old beliefs and tales that have very little of historical, but have ended up in our history books nevertheless.

Well, this really truly cracks the world of millions of Italians, who religiously learned the name of the Sette Re di Roma in primary school, along with those of the planets of the Solar System and the words of the Inno di Mameli. Romulus, Numa Pompilius, Tullus Hostilius, Ancus Marcius, Tarquinius Priscus, Servius Tullius, Tarquinius Superbus. And they came off the top of my mind, after all these years. However, history tells us, forgive the word twist, a different story, because Rome had an eight king, Titus Tatius, who ruled for about 5 years, probably until the year 745 B.C., in a co-regency with Romulus.

Tu quoque, Brute, fili mi, you too, oh Brutus, my son. These, we were taught when small, were the last words of one of Rome’s greatest leaders, Julius Caesar, stabbed to death in the Senate after a conspiracy organized also by his protegé, Marcus Iunius Brutus. Now, we sort of know – and always have, really- that good old Caesar never uttered them: Suetonius, Roman historian extraordinaire, wrote in his Twelve Caesars our general simply moaned in pain and passed.

Where does the old legend about his last words come from then? Guess: from Suetonius himself. Indeed, in the same work, he also states Caesar did speak shortly before dying, to say – in Greek, the language of Roman élite – kai su teknòn, which means “you too, son.”  A historical fake as old as the murderous plot itself, which became however popular and remained entrenched in the memory of people for thousands of years, a symbol of the pain and sorrow caused by betrayal. 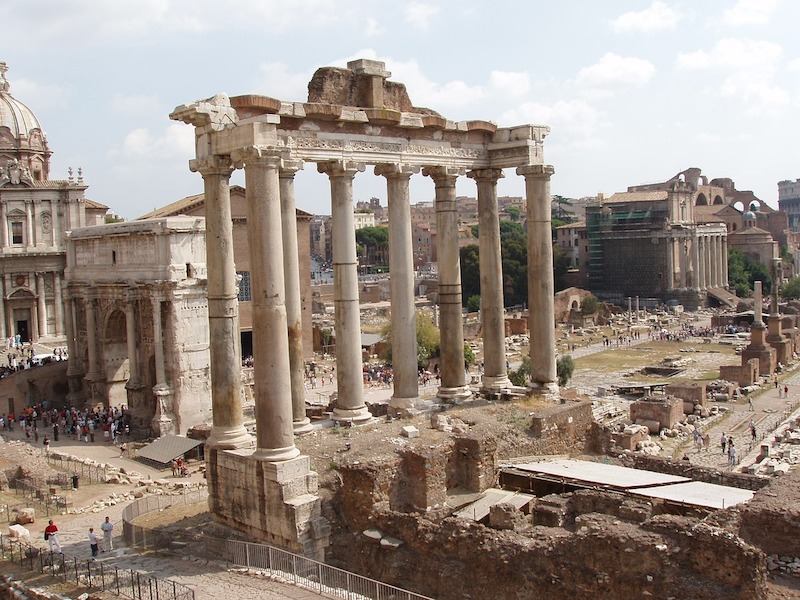 The Middle Ages: the Constitutum Constantini

Not many “bufale” had the historical weight of the Constitutum Constantini, a document that, for centuries, was believed to be an original. Not a big deal, you may say: sometimes it does take ages to reveal a hoax, but the content of the Constitutum, or Donation of Constantine to say it in English, was so explosive it did influence the political history of Europe for a bunch of centuries. The document appeared for the first time in the Pseudo-Isidorian Decretals (9th century) and was interpolated in the Decretum Gratiani, three centuries later. It was thought to be the manuscript copy of an imperial decree emitted and signed by Emperor Constantine in 315 AD, where he bestowed a number of advantages to the Pope of those years, Sylvester I, and to all of his successors, including their unquestionable supremacy over Roman Emperors. Considering that a large chunk of Europe’s troubles during the Middle Ages was caused by the endless bickering between popes and emperors of the Holy Roman Empire, you can easily understand the weight of the document, which was routinely waved under the eyes of secular rulers as a sign of Rome’s non-negotiable superiority.

It was to take a good few centuries to finally debunk the myth around the Constitutum Constantini. In 1440, Italian philologist Lorenzo Valla analyzed the document, realizing it contained a series of historical mistakes, including the use of “Constantinople” instead of “Byzantium” to indicate Constantine’s own city: the name change was to take place in 330, 15 years after the date of the supposed emission of the Constitutum.

Galileo Galilei is not only one of the best known Italians in history, but also one of the fathers of modern science. However, most of us know the Church didn’t swallow well the fact he supported Copernicus’ heliocentric theory, fact he had made clear in his Dialogue Concerning the Two Chiefs World Systems. The text was banned, led to Galileo’s many problems with the Inquisition and, eventually, to his  conviction. While travelling to Rome for the trial, Galileo wrote to old-time friend Elia Diodati, explaining how the Dialogue was “more dangerous for the Church than the writings of Martin Luther and Calvin,” showing he was fully aware of the risks associated with supporting Copernicus’ theories.

Galileo was convicted, but not condemned to death because he accepted to recant his theories. At this point, legends say he, while leaving the tribunal after denying the validity of his own scientific work, breathed out the iconic eppur si muove, “yet, it moves,” many of us have learned about on history books. Truth is, Galileo never uttered such words: they were the invention, in 1757, of journalist Giuseppe Baretto who wrote  a text in his defense and wanted, very likely, give him a somehow more heroic allure.

As you see, the habit of making up “bufale” to create a buzz around someone, a narrative flourish over an event or just to make a story more interesting is not something invented by the internet and social media. Fake news, in the end, were there at the times of Rome’s kings, of Julius Caesar, during the Middle Ages and made an appearance even in the life of Galileo the great.

Yesterday as today, it remains at times difficult to understand where truth ends and fiction begins: eyes open, guys, at all times.