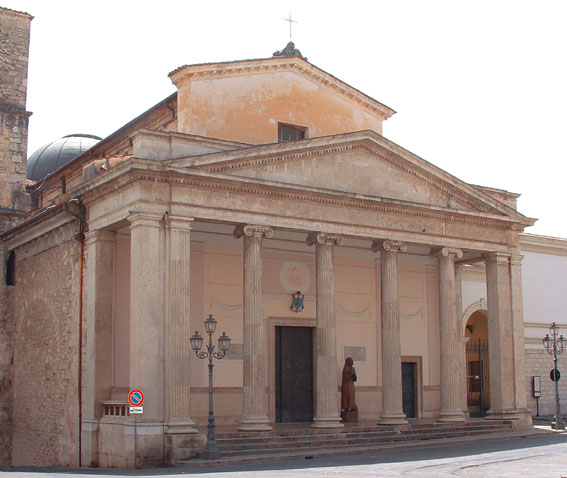 As you navigate your way through the countryside there are many smaller towns and villages that you will come across in your journeys.  Each locale has its own special charm with the ability to make you feel as if you were inserted into a living postcard.  Isernia is just one of those special places.  It is a small town of a little over 20,000, and is a typical small countryside village in the central region of Italy.  It is in the region of Molise and the capital of the Isernia province.  Molise sits just south of the Abruzzo region, north of the Puglia region and east of both Lazio Roma and Campania.  The region is hilly and the easternmost edge rests against the Adriatic Sea.  It is the second smallest region in Italy, next to Valle D’Aosta.

Like most of the inland smaller cities and towns not many tourists from outside the area come to visit, which is indeed a shame.  There is so much that these parts of this country have to offer that missing it means shortchanging your true experience of Italian life and culture.  It may not have the bright lights and press that some of the other cities receive, but still an adventure to behold.

What a place like Isernia offers is unique to each visitor.  It is a relatively easy jaunt from Rome, Naples or Pescara.  Journeying through this region and eventually into Isernia has you travelling a well forested area with many small medieval hamlets, castles and ancient ruins, like the ancient Samnite town of Aquilonia.   You will find natives who are warm and friendly and the cuisine specific to the region.  As Isernia sits a little inland within the Molise region, it is still economically agriculturally driven. 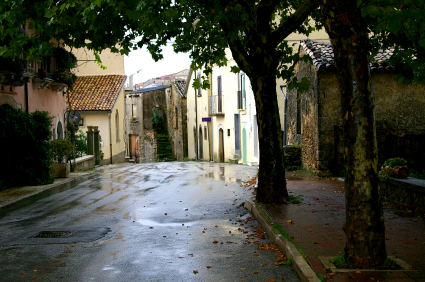 A quiet street in Isernia

The town sits a little above the valley between the Carpino and Sordo rivers.  Its urban planning still reflects that of ancient Rome.  It has a central wide street and side streets at right angles on both sides.  This town and the surrounding area go back even farther in time.  Historians claim the city was settled at least 700,000 years ago.  Most recently, Science magazine cited a nearby site called Pineta as the most ancient site where traces of fire by men have been found.  This archeological excavation contains thousands of traces of weapons, animal bones and stone tools.  The Museo Nazionale della Pentria e Isernia houses all of the exhibits of this fascinating find.

As time went on it became a key communication center between southern Italy and the inner Apennine Regions.  Still visible to this day are the remains of an aqueduct and a Roman bridge dating back to the time of Trajan and Antonines.

When the country was united in 1861 the Molise and Abruzzo regions were united as one.  It wasn’t until the early 1960’s that the regions were separated.  The early 1970’s the province of Isernia was created, with the city of the same name as its capital. 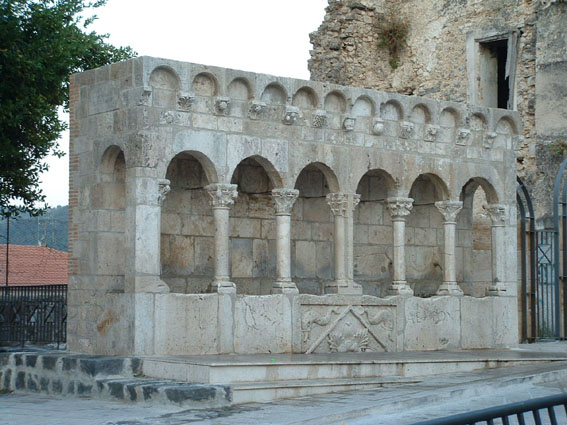 Isernia’s claim to fame is its famous Fraterna Fountain.  Built in the 13th century, it is made from stone slabs taken from ruined Roman monuments.  Made with six water jets it was restored in 1835.  Other sites within Isernia include the Cathedral of St. Peter and Paul with its famed dome and arch.

The Santuario dell’Addolorata, Castelpetroso strikes an impressive profile against the mountains.  This church is built on the site of the Apparitions of the Virgin Mary to two peasants in the Spring of 1888.  In November of 1888 a journalist from Bologna took his ill son there. The son was miraculously cured of his disease by the water that had come forth from this spot.  The water, by the way, still flows. The apparitions continued off and on through the 1970’s.  In 1973 Pope Paul VI  proclaimed the Blessed Sorrowful Virgin of Castelpetroso female patron of the Region.  The new sanctuary was inaugurated in 1975, which culminated almost a century of construction.  Since 1993 the Sanctuary has been entrusted to the Franciscans of the Immaculate, a new religious order.

Built and re-built over the ages, Isernia has seen much in the way of destruction both manmade and natural.  On September 10, 1943 the center of town was flattened by bombing raids.  As a result, a monument was built to honor those killed in the raid.  It sits center stage in the appropriately named Piazza X Settembre.  The latest destructive force was handed out by Mother Nature in the form of an earthquake in 1984.  Despite the latest natural tragedy the city has since rebuilt its commercial corridor. 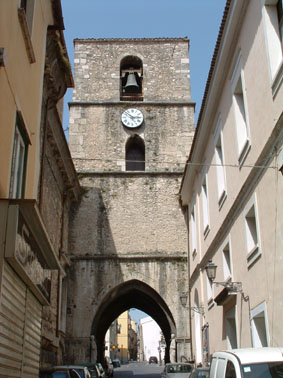 Isernia is a great central location for exploring other smaller villages around the area.  The largest and most popular rural village is Castelromano about five km west of the city.  There are some remains of ancient masonry walls used to defend the area, dating back to the third and fourth centuries.  Places like Cerro al Volturno with its distinct castle seemingly growing out of the rock, Castel San Vicenzo, another hillside village, Pietrabbondante housing the well preserved remains of an ancient theatre, and Agnone, which has been producing church bells for over a thousand years, are all surrounding Isernia and all beckoning to be visited.

It is trips like these that make visiting Isernia memorable.  From the green hillsides to the snow capped mountains in the distance you will find much in this area of the country.  If you enjoy taking in a true slice of Italy, then Isernia is the destination of choice.