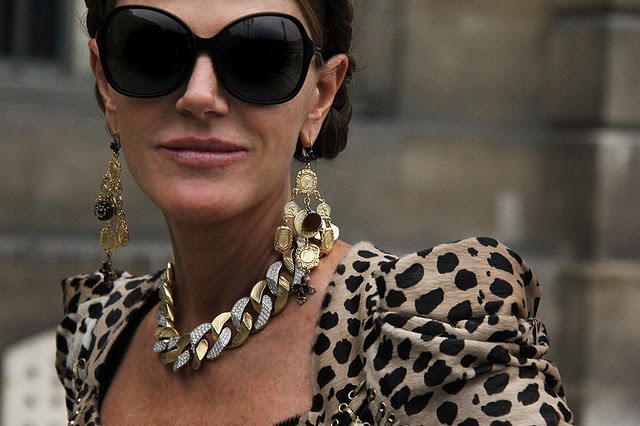 Anna Dello Russo in Balmain Photographed by Tommy Ton for Style.com (via AnnaDelloRusso.Com)

“I don’t want to be cool. I want to be fashion!” proclaims the header on Anna Dello Russo’s website. Anyone familiar with Dello Russo’s personal style wouldn’t doubt this statement for a moment. And while the editor-at-large and creative consultant of Vogue Nippon isn’t a household name–yet–she is certainly a star in fashion and certain internet circles. Dello Russo owes a lot of her current popularity and fame to street style photographers like The Sartorialist‘s Scott Schuman and Tommy Ton of Jak + Jil and the readers of their respective blogs, who have embraced the fashionista and her brash, irreverent and over-the-top fashion sense. 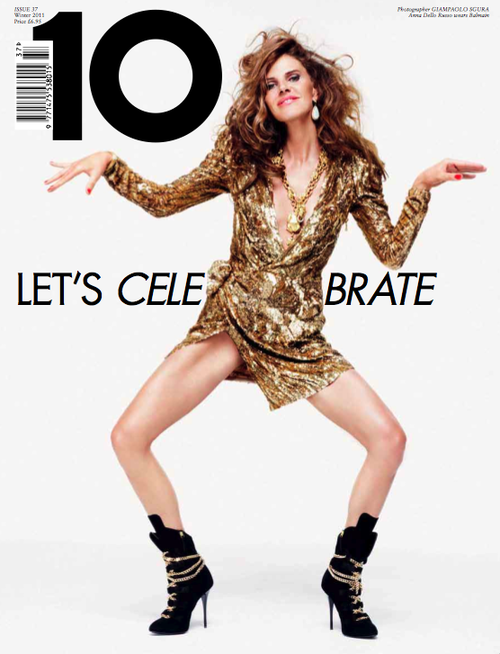 On the Cover of Ten Magazine, Again in Balmain – Photographed by Giampaolo Sgura (via 10magazine.com)

There are a few things that set Anna Dello Russo apart style-wise. One is that she is fearless, another that she is unique. Never afraid to rock a straight-off-the-runway look or a feather headdress Dello Russo embodies much of what fashion should be: fun and freeing. The former fashion editor at Vogue Italia and editor of L’Uomo Vogue uses fashion to express herself rather than just to dress herself. Dello Russo’s keen eye not only means she is spot on when styling editorials, but also that she is able to navigate the changing tides of the fashion industry. The woman who reportedly owns 4,000 pairs of shoes was also the one who advised good friend Stefano Gabbana to sit fashion bloggers in the front row at fashion shows. (Dolce & Gabbana also designed Dello Russo’s wedding dress, complete with 60-foot train. She says she wore Balenciaga for the divorce.) At the time blogging was a nascent industry that is now catching fire, making a star out of Anna Dello Russo and her contemporaries. 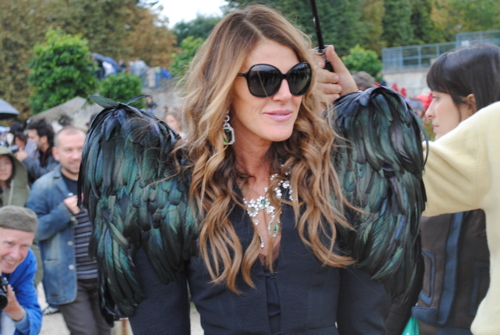 Born in Bari, Anna Dello Russo now lives in Milan and, according to a recent article in Corriere della Sera, the fashionista keeps two apartments side by side near the Corso Como. Both share a Chanel doormat. One is only for clothes. The other Dello Russo shares with her beloved dog Cucciolina. If it’s not yet clear Anna Dello Russo is serious about fashion and she likes to make a statement; AdR isn’t afraid of being theatrical or cheeky. Not many others could pull off a feathered blazer, Francesco Scognamiglio fish belt, gold spangled Moschino suit or the many hats and headpieces Dello Russo routinely sports. “There are many faces to my personality. That is why I love clothes so much,” Dello Russo explains on her blog. “It’s more like a different expression of myself…For me, fashion is perfect, as it conceals a lot and I find it quite therapeutic. It helps me survive as I can make myself feel better.” 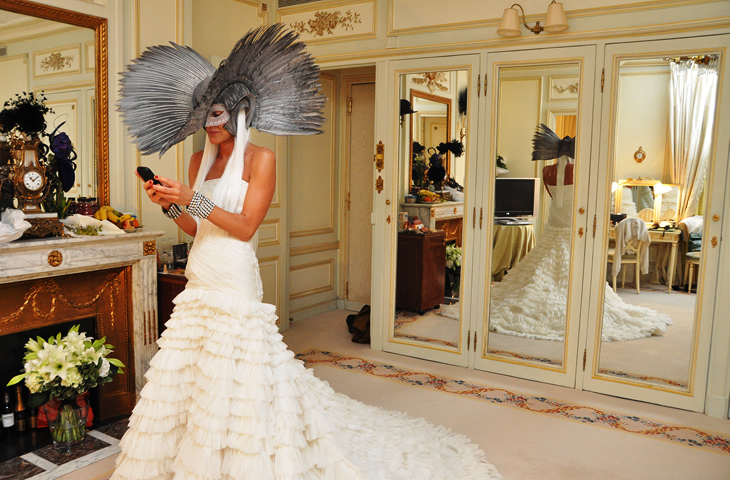 Getting Ready at the Ritz for the French Vogue Masquerade Ball in a Custom Pucci Gown and Gareth Pugh Feathered Headdress – Photographed by Tommy Ton (via AnnaDelloRusso.com)

Where once Anna Dello Russo worked only behind the scenes to create fashion magic–she has described her early self as shy and a hard worker–she is now front and center. Not only posing for photographers outside of fashion shows, but also walking the runway as she did for the recent Lanvin for H&M show. Dello Russo also has her own scent, which debuted on Yoox.com on December 3rd, called Beyond. Photographed by Juergen Teller, and up-and-coming photographer (and AdR favorite) Giampaolo Sgura, for the launch Dello Russo also stars in a video where she frolics in Pucci and Cavalli while Kayne West’s “Runway” plays in the background. 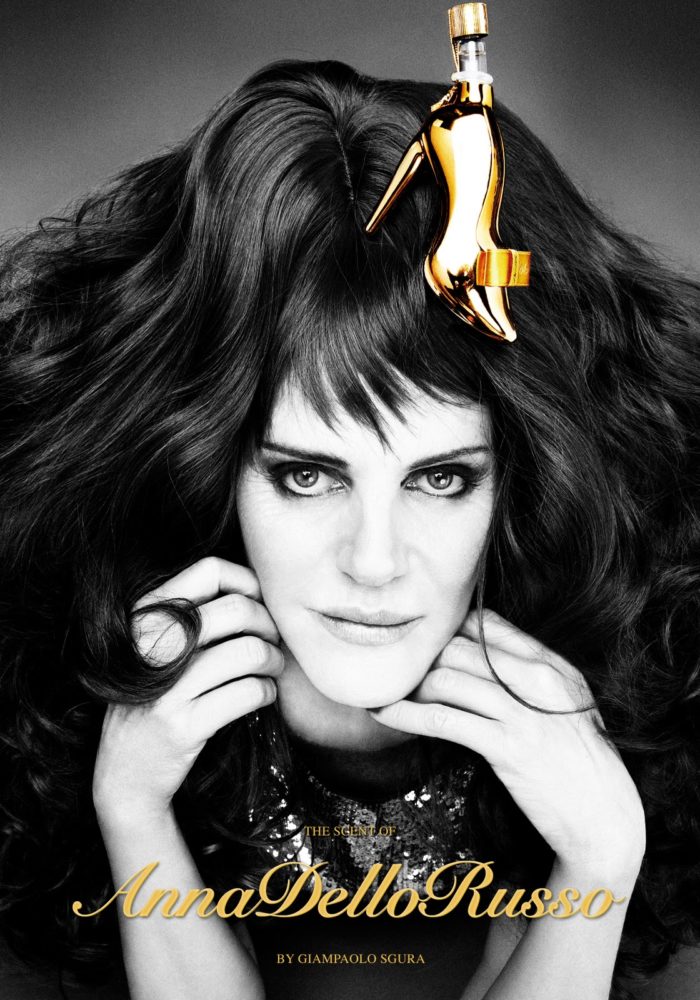 When asked what sets Anna Dello Russo apart from the fashion pack Scott Schuman recently told W that Anna “truly loves fashion. What makes her unique is that there’s a real sincerity. She respects the clothes.” It is fitting then that the Anna Dello Russo perfume bottle is not only shaped like a shoe, but is also shiny and gold. Quite like Ms. Dello Russo herself–brash, bold and, in a world that too often consists of boring black and bleak neutrals, a true shining light and fearless arbiter of style.

This is the first installment of Style Spotlight, a new fashion series on Life In Italy, which will focus on the personal style of fashionable Italians.