When you talk about Italian handbags, Fendi is one of the first names that springs to mind. Fendi began as a family business specializing in fur and leather goods, and carried on with this expertise, till the advent of Karl Lagerfield, who turned Fendi overnight into a brand sensation. The Fendi Zucca logo became the talk of the fashion world in the late sixties, and the legend of the Fendi bags was born.

Fendi bags were stiff and hard before the reign of Lagerfield following the traditions of luggage bags, but he introduced the concept of unstructured bags in different shapes, colors, and sizes. These were tanned and embellished using different methods, giving Fendi bags an elegant yet trendy feel. The Fendi bucket and hobo bags of the time in Zucca print were much sought after, along with the classic boston shapes, and remain popular to this day.

Silvia Fendi created the Fendi Baguettes in 1997, and Sarah Jessica Parker in her role as Carrie Bradshaw in the popular series Sex and the City made them a rage. These small, convenient bags were soon tucked under the arms of fashion-savvy celebrities, and it was not long before they figured on the wish-list of every trendy woman about town. This bit-sized bag became an international phenomenon, selling 100,000 pieces in its first year. It has been created in hundreds of versions since then, including the limited edition commemorative collector’s version created in 2007 on the tenth anniversary of its launch.

Hillary Duff wearing a Fendi Spy Bag
Silvia followed up with the success of the Baguette with the Fendi Spy in 2005, which shot into instant fame not just because of its gorgeous, slouchy, heavily embellished look with braided handles, but also for the secret compartments inside. Nicole Ritchie, Ashley Olson, Kelly Osbourne, Madonna, Hillary Duff and Gwen Stefani all made a beeline for this beauty. The Fendi Spy became an overnight mega-hit, available in urbane to bohemian versions of leather, silk, velvet, the Zucca print fabric, snakeskin, and a limited edition crocodile, which, at 44,000$, costs more than some cars.

2006 saw another Fendi “It” bag, the big buckled Fendi B., which was again toted by all the fashionistas in Hollywood and beyond. With its exaggerated buckles, structured good looks, and beautiful versions in everything from leather to lace, Fendi B. is today one of Fendi’s top-selling bags. Jessica Simpson is seen here wearing the Fendi Patent B. Bag with Filigree from the Fall 2006 runway, while Nicky Hilton is sporting a Black-and-White classic Fendi B.

The truly exclusive line of Fendi, however is Fendi Selleria, which follows the oldest Roman traditions of  bagmaking and saddlery followed by Adele Fendi, and is totally handmade. The Selleria limited edition line, endorsed by the likes of Beyonce and Victoria Beckham, can be custom-made according to client preferences and the finished bag may take up to four months to be delivered. At 38,000$, the elegant, roomy Selleria Large B. Mix Fendi bag made in cincilla or sable, by a house that is known for its abilities with fur, is truly worthy of a mega-celebrity.

The Fendi bag is all about a striking shape. Be it the super-cool Baguette, the Spy, the Fendi B. or any of the Fendi bostons, hobos, and totes, it is the basic shape that looks beautiful and is versatile enough to be interpreted in different materials, season after season, in order to evoke rich indulgence and a powerful femininity.

Salvatore Ferragamo was an artisan first and foremost, a true believer in the marriage of form and function, of beauty and comfort. This legacy has been carried forward by the Salvatore Ferragamo brand which started as an exclusive shoemaking enterprise but has now branched out into designer handbags, accessories, and clothing.

Salvatore Ferragamo bags are beautiful, but that is not the best of their appeal. An adorable bag like the Salvatore Ferragamo Pheasant Feather Bag, totally covered by colorful feathers, with a crocodile trim and bijoux clasp, is spacious enough to hold a lady’s necessities on a day or evening out. Which is why in the movie Sex and the City released in 2008, the character of Carrie Bradshaw carries it with aplomb and characteristic effervescence.

A completely different animal is the Ferragamo Gancio Lucchetto Hobo with its lace-through top handles and the brand’s signature Gancini detailing, and a buckled bottom. This shiny, luscious patent bag has been seen on celebrities like Eva Longoria, and is absolutely worth it for any fashionista going for a bold, fashion forward look. 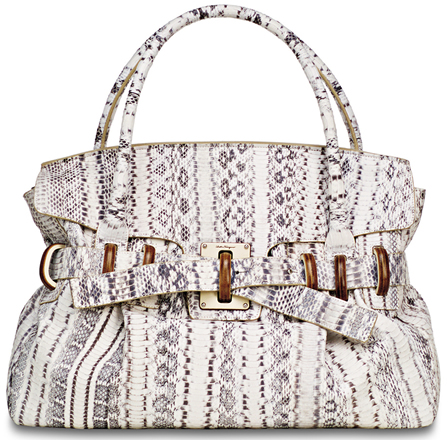 The Salvatore Ferragamo Apollonia Bag has a simple shape, but Ferragamo scores here because of the material used. The skin used is a black and white hardwick, and since the bag requires relatively small pieces from a large python skin, the pattern chosen is very uniform, which adds to the understated appeal of this bag. The skin is shown in all its natural, glorious beauty, which is perhaps why celebrities with simple, classic tastes like Reese Witherspoon have been seen toting this Ferragamo beauty. It is a roomy bag, and the hardware used is exquisite wood and gold. This, coupled with the painstaking craftsmanship that is the Ferragamo trademark, gives this bag its “It” potential.

Salvatore Ferragamo bags on the runway

Celebrities love Ferragamo bags, not only for their great looks but also for the ease with which they can be carried and the amount of a stylista’s arsenal they can carry. Fashion mavens like Jennifer Aniston and Nina Ricci are seen often with Ferragamo designer handbags, both on the red carpet and off it. The Salvatore Ferragamo brand comes out with spacious, comfortable bags each season, in exotic skins, to-die-for hardware and an absolutely drop-dead-gorgeous attitude.