Vogue Italia‘s New Cover, the Latest Development in an Industry Struggling with Size

In recent years runway shows and advert campaigns have made the days when models looked like Cindy Crawford feel very far away. There will always be athletic top models like Gisele, but the majority of runway girls seem to be getting thinner. Even the Victoria’s Secret Angels–often among the curvier models–have recently come under fire for being too thin. Candice Swanepoel who was labelled “scary skinny” after appearing at an event for the lingerie giant looking smaller than she ever had before. One look at Claudia Schiffer at the recent Cannes Film Festival had many wondering if the bodacious supermodels of the past were now succumbing to the overwhelming pressure to be thin. Issues concerning body image and eating disorders have been plaguing the fashion industry for some time now prompting several countries including Italy to introduce regulations on just how thin is too thin. While the trend still seems to lean towards super skinny girls, designer Jean-Paul Gaultier and Vogue Italia‘s editor-in-chief Franca Sozzani are trying to bring fresh perspectives and real change to the problem of distorted body image and eating disorders in general.

The June 2011 cover of Vogue Italia seems a genuine step in the right direction with an acceptance and celebration of different body types. The three models on the black and white cover are considered “plus-sized” in the skewed world of fashion industry sizing. Shot by Steven Meisel models Tara Lynn, Candice Huffine and Robyn Lawley demonstrate the opposing side of the skinny model argument. While many fashion designers and insiders look to skinnier models to show clothing better, others will use examples like the Vogue cover to plead a case for models who looking like “real women” actually being more attractive, especially to men. This argument also has its flaws as words like “average” or “more attractive” are loaded. It seems the most positive route to take would be to try to celebrate a variety of different sizes and healthy living, as well as clothing that flatters more than just a size zero. 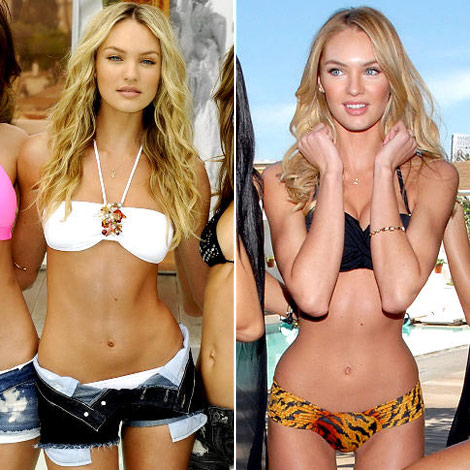 Before and After: Candice Swanepoel via stylefrizz.com

This brings up the problem of sample sizes, the size of the clothing prototypes that models have to fit into for runway shows and fashion shoots. Even starlets hoping to borrow from designers have to whittle themselves down to the sample size in order to fit in to any of the on-loan dresses they’re offered. The scary truth is that sample sizes have dropped drastically in the last decade or so. This is a clear indication of how the fashion industry’s attitude towards size has changed and how much pressure models are under to be certain sizes in order to land and keep jobs. Victoria’s Secret Angel Doutzen Kroes is just one who has reported not getting runway jobs because she no longer fits into standard sample sizes. While it’s difficult to say where this obsession with super-thinness began, many trace it back to the heroin chic era of Kate Moss in the 90’s. Some models, like Moss, are naturally thin but the problem is that many women–models and ordinary women alike–are not and take drastic measures to look like the women on catwalks and in magazines. This drastic shift in the kind of body that fashion deems to be chic is what has prompted some, like Sozzani, to take a stand. In addition to the groundbreaking cover the editor-in-chief also saw to the addition of a “Curvy” section to Vogue Italia.

“I did some research and found that there are countless pro-anorexia websites and blogs that not only support the disorder, but also urge young people to be competitive about their ‘body shape’… …Fashion has been always blamed as one of the culprits of anorexia, and our commitment is the proof that fashion is ready to get on the frontline and struggle against the disorder,” Sozzani on the Vogue website campaign. 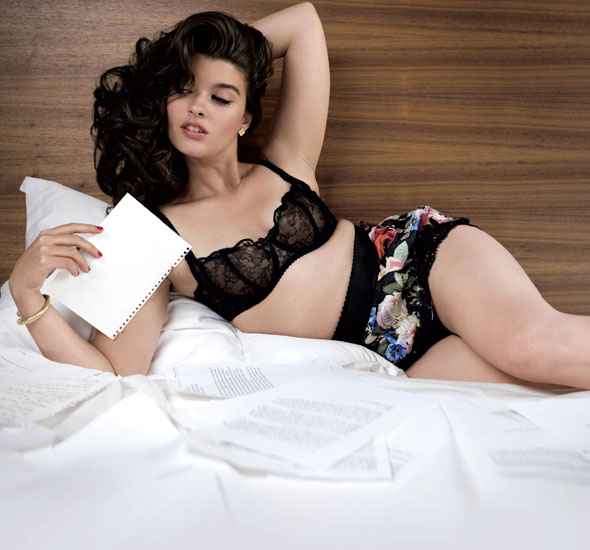 When She Was Plus-Sized: Crystal Renn in V Magazine via crystalrenn.com

Crystal Renn is one of the few models who actually acquired her fame as a “plus-size” model. Earlier in Renn’s career the model battled anorexia (once reportedly weighing in at 88lbs, drastically underweight for her 5’9″ frame) and after gaining weight and being repackaged as a “plus-size” model she emerged as a hero for curvy women everywhere. Not only did Renn rack up campaigns, runway spots, and write a book she also became a household name and one of the key figures in the fashion-weight debate. Earlier this year the model emerged looking markedly thinner, prompting some to accuse her of folding under pressure from the fashion industry, while others wondered if her eating disorder had resurfaced. Renn took to her agency Ford Models’ blog to deny these claims and to assert that her newfound weight loss was the result of exercise.

“A lot of people said the industry was pressuring me, my agency was pressuring me, I was pressuring me, but it was just not the case in all three cases,” Renn explained, “I feel pressure probably more than any place from the public and the media. I think by placing a title on my head – which is plus-size – and then the picture that these people have created in their mind about what plus-size actually is, I basically fail you just with that, because I couldn’t possibly live up to that. At this point in my life I would have to have another eating disorder to live up to that expectation. I had anorexia ultimately because someone else set the standard for me and I wanted to follow it. And if I followed what the public wanted from me or what the media wants from me I would be doing the same thing – I would have a binge eating disorder…It’s about individual health. You cannot tell if someone’s healthy, where they are mentally, from what’s going on on the outside, because health is different for everybody at different sizes.” 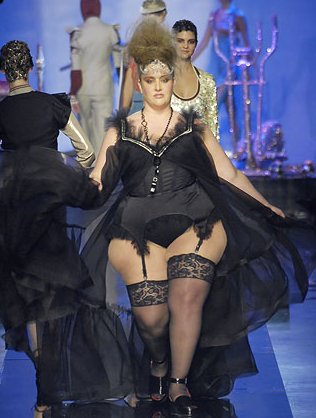 The message behind Renn’s words seem good, but it’s impossible to know as she acquired campaigns for Jimmy Choo and DSquared after the weight was lost. Coco Rocha is another supermodel who has claimed to have come under fire for being too big. In 2010 the Canadian model spoke out about losing work due to her “large” size 4.

“I’m not in demand for the shows anymore. I’ve been told to lose weight when I was really skinny. Everybody knows that, in general, a basketball player needs to be tall and a fashion model needs to be skinny, but how skinny is too skinny?” Rocha wrote on her blog, “You know what, I’ve stopped caring. If I want a hamburger, I’m going to have one. No 21-year-old should be worrying about whether she fits a sample size… It took me a long time in the business to realise I didn’t have to do everything people told me I should if I wanted a career.”

While Rocha’s attitude is refreshing it also appears to be an easier stance to take for a model who has already found success and with it a certain amount of financial security.

What do you think of Italy’s most loved Australian model, Megan Gale? Although she is nearly in her 50’s now, she is still as natural as ever. 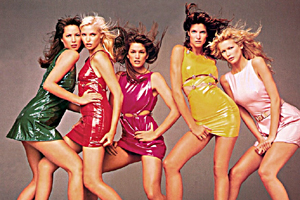 The skinny model debate hit in 2007 after news of models dying due to eating disorders. In response several countries instituted policies to force the fashion industry not to use seriously underweight and unhealthy models in their runway shows. Many designers and models weighed in with their opinions, and panels were set up to try to reform the industry.

German designer Karl Lagerfeld, who designs for Chanel and Fendi, is one of the most vocal proponents for skinny models, even getting angry when H&M requested that designs from his capsule collection for them be available in larger sizes. “What I created was fashion for slim, slender people,” Lagerfeld said at the time. In regards to the skinny model debate Lagerfeld has said that fashion is about “dreams and illusions” and that the people who are against slim models are overweight and jealous. “These are fat moms sitting with their bags of chips in front of the TV and saying that thin models are ugly,” Lagerfeld told German magazine Focus. H&M, for their part, came under fire from consumers and industry watchdogs for using a slim Chanel Iman in ads in 2010. It seems that very few fashion companies are immune to the draw of using the super slim or aiding already thin models with the overzealous use of Photoshop.

While some are adamant that the skewed body image projected by the fashion industry is harmful, others along with Lagerfeld, don’t agree. A recent study out of the University of Bologna, as reported by the Daily Mail, claims that having bigger models will only increase the obesity epidemic in the West. It seems clear that what should be promoted is a healthy lifestyle and a weight that is appropriate for individual frames and body types. The fashion industry–so focused on creating dreams and aspirational images–should also recognize that their customers come in a variety of sizes and that their products should also reflect this. Finding a middle ground between too thin and overweight seems the best way to go in promoting healthy body images for all women.