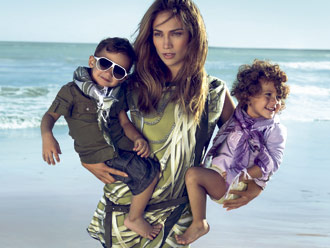 With designers from Stella McCartney to Marc Jacobs designing for little ones it’s obvious that clothing for children is big business. In Italy the major fashion houses have also jumped into the game. Last month we looked at Roberto Cavalli’s Angels & Devils line, which sells alongside kids’ clothing from designers like Fendi and Dolce & Gabbana. This season Italian megabrand Gucci joined in, debuting a line for well-dressed mini mes that was launched with a blockbuster ad campaign featuring Jennifer Lopez alongside her children with husband Marc Anthony, twins Max and Emme. In the ads, shot on the beach in Malibu, a sultry Lopez is seeing holding her smiling, ringleted tykes who are decked out in their Gucci finest. For Emme that means purple, including a chic scarf, and for Max there are cargo shorts, a military-inspired olive green button-down, and a nattily knotted scarf of his own–plus a pair of glam white shades. Another shot shows Emme laid back and casual in jeans and a t-shirt (with a Gucci purse on it, naturally), and Max decked out in a shirt covered in Gucci’s interlocking Gs logo. For kids with mothers like Jennifer Lopez how could you expect anything less? 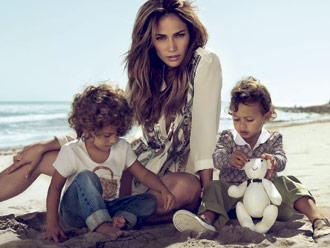 A recent report in the New York Times looked at the growing popularity of designer clothing for children and the growing kids’ market in general. Overall children tend to need more clothes than adults because they grow out of the ones they have so fast, plus they generally take less care of what does fit. If a woman buys a Gucci dress she’ll be much more inclined to be careful with it than her toddler would with a similar garment from the designer. Ruined or outgrown clothing means more money for manufacturers when parents look to replace them. The article states, “According to the Datamonitor Group, an industry research organization, children’s wear in the European Union is outperforming the rest of the market. Parents have ‘a propensity to show how they have weathered the economic storm through their kids,’ said Marshal Cohen, chief industry analyst with the market research company NPD. ‘Couple that with a desire to insulate their children from economic constraints,’ he added, and ‘the first place to spend goes to the kids.’” This, of course, all translates to dollar signs for design houses looking to stay solvent through a global recession when conspicuous consumption has started to be seen as somewhat vulgar. But spending on your kids never goes out of style. 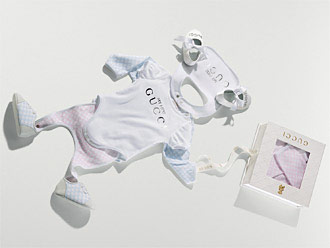 The problem of designing a line of children’s clothing that reflects the attitude and tradition of a brand is not always simple, however, especially when you’re talking about a fashion house like Gucci, which is known for its sensuality and glamour. To translate Gucci for children head designer Frida Giannini went back to the house’s archives to gain inspiration. In doing so Giannini developed three collections–one for Toddlers (0 to 24 months), one for Boys and another for Girls (2 to 8 years old)–that draw influence from Gucci’s past. The designs–produced in Italy and some already available online–incorporate such Gucci signatures as the tricolor red-green band (the “Web”), horsebit hardware, and the interlocking GG logo print. The horsebit was first used by Gucci in the 1950s when it appeared on saddle-stitched leather bags, while the interlocking Gs (for Guccio Gucci’s initials) were first seen in the 60s. The Web also associates to the brand’s equestrian roots and was originally inspired by the strap used to hold down a horse’s saddle; it has also been used on Gucci products since the 50s. In the children’s collections the Web can be seen on belts and trainers, while the interlocking Gs are splashed over everything from rain boots to shoes. A new addition is the Gucci teddy bear logo, which can be seen on some styles. 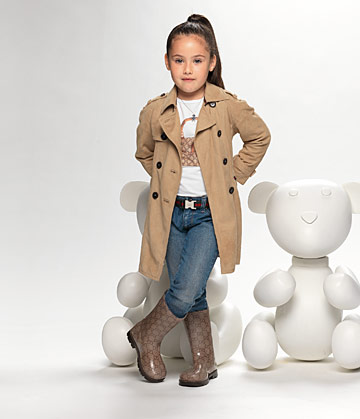 The Gucci children’s collection includes clothing, shoes and accessories like hats and shoes. For girls there are chic suits–including a blue and white striped cotton blazer and shorts set–as well as trench coats in classic colors like navy and khaki, patterned leggings, flats with horsebit hardware, tracksuits, printed t-shirts, cardigans and bomber jackets. In general the colors remain very traditional and very old school Gucci. No day glo pink or orange here. The Gucci kid is obviously one who wants comfortable and functional clothing, but one who is also classic in their style. The most one finds in terms of colors is some lilac and pink, including a pretty trench and scarf, and a printed floral sundress. Accessories for girls range from the aforementioned scarf to striped belts, shoes and rain boots, jewelry, headbands and hats. 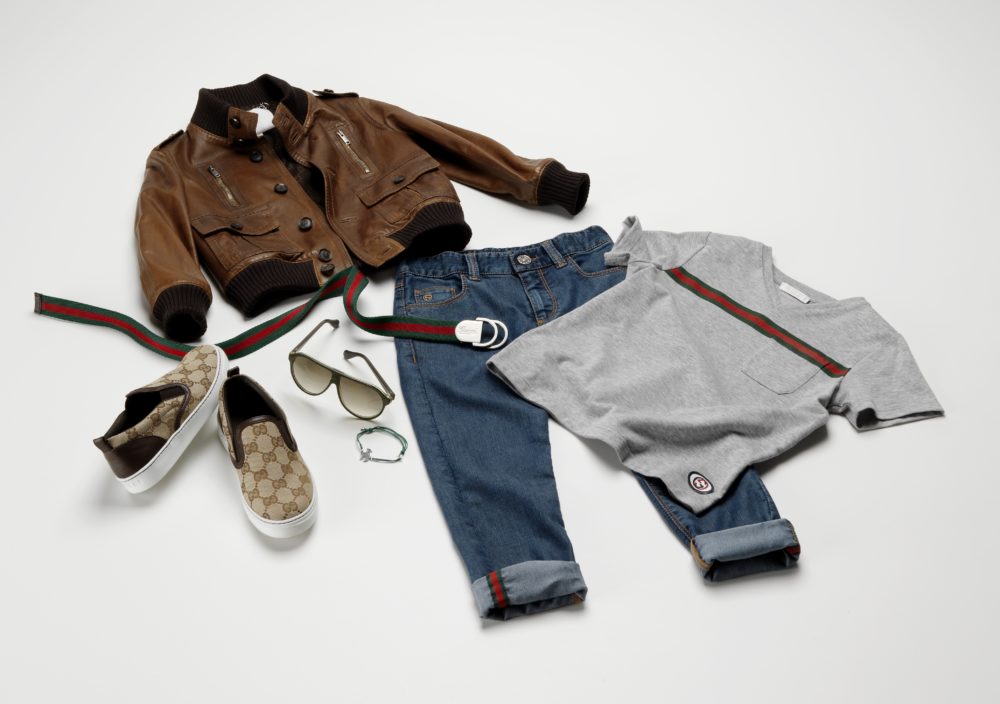 Boys get a similarly traditional treatment although with a slight rock ‘n roll edge–a little mussed hair and cool style to add to the classic package. Styles range from blazers and peacoats to leather bomber jackets, jeans, sweaters and t-shirts. For the preppy boy in your life there are striped Bermuda shorts that can be worn with a white polo topped with navy sweater complete with crest. The cherry on top? A pair of white loafers with horsebit detailing. The same array of accessories–from fedoras to striped belts–is available for boys too, along with a selection of shoes and boots. 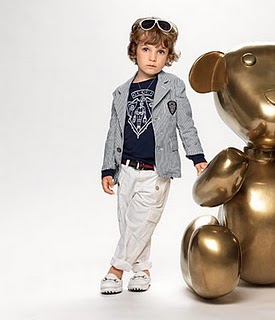 The logo-heavy baby line is all about soft and classic. There are onesies and tracksuits decked out in Gs, as well as the new teddy bears. Baby girls get some soft pinks and ruffles thrown in, while baby boys are all about styles in blue, red and white. The Gucci baby is definitely a sophisticated one.

To coincide with the new Gucci’s children’s line the brand donated $1 million to UNICEF and their Schools for Africa program. The donation is a nice reminder of the truly important things in life, such as education–“a gift forever,” as Gucci says. And while logoed clothing for boys and girls may seem frivolous there is no doubt that not only is there a market for it, but it sure is adorable.