The House of Antico Setificio Fiorentino

Antico Setificio Fiorentino, nestled in the historic gardens of the San Frediano area of Florence, Italy, is home to centuries old looms and antique silks. Visiting the inner dominions of Antico Setificio is like stepping back in time to the era of the Renaissance when finery was perhaps at its best. A magical aura pervades the showroom. It is not hard for visitors to imagine the Renaissance Kings and Queens and noble families of the era, garbed in the sort of finery displayed in this place.

The beginnings of Antico Setificio Fiorentino date back to a time when artisans proliferated and fortunes were made through the development and manufacture of some of the finest elements of life. The fabulous clothing in luminous silks that appear on the persons of nobility in the paintings and frescoes of Masaccio, Pontormo and Piero della Francesca, are actual, faithful reproductions of genuine fabrics and articles. They give an unmistakable picture of the true glory of the woven silks of those times, created by famous master weavers, who took the business of weaving silk very seriously indeed. 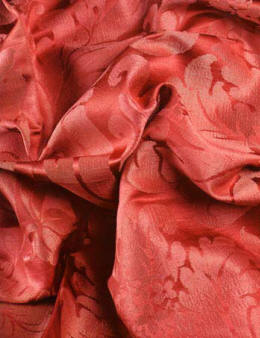 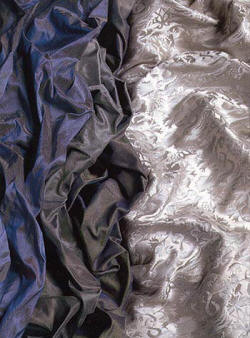 The team of eight master weavers and two apprentices at the workshop of Antico Setificio Fiorentino continue to weave with a mission of quality and beauty even today, practicing techniques from the past on antique handlooms. Further keeping the cultural heritage alive, each apprentice learns the trade from a master weaver who has learnt the trade from a previous master of this art, following backwards in time to the venerable weavers of the original Tuscan families.

In the middle of the eighteenth century, several Florentine noble families made the fortuitous decision to link their fine fabric designs, detailed patterns, weaving looms, warping machines, and energies into a single silk fabric workshop, today’s Antico Setificio Fiorentino. Already wealthy and influential, this way the nobility increased the fortunes of their own families, as well as that of Florence. They took their ambitions one step further in their quest for a magical fabrics so delicate in nature and splendid in quality that even Popes and Kings would marvel at them. 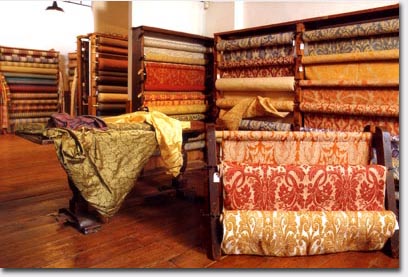 Originally destined to grace the noble families and their palaces, the lustrous silks of this unique workshop met with the admiration of all who came upon them. Gradually its silken creations were extended to other families of nobility in some of the most prestigious palaces throughout Europe like those of Stockholm and Copenhagen, as well as the Kremlin. Special designs were created for each of the wealthy families and fabrics were carefully crafted for use in decorating rooms, including the palace chapel, wedding trousseaux, and for celebrating festive occasions, such as a new birth.

Each of the processes required to produce the finest silk the world has ever seen takes place within the premises of Antico Setificio Fiorentino. The raw spun silk is received from Brazil for the most part. At the workshop, the silk is dyed by hand before it is wound onto spools that belong to machinery that has been in use since the 1850s.

Next, the thread is carefully relocated to quills or one of the two warping machines, which still remain, from the mid 1800s. None other than Leonardo da Vinci designed one of these and it remains in perfect working order. The handlooms also date back to the eighteenth century, the early days of the workshop, along with many of the designs used for the fabrics.

A beautifully filled salesroom showcases silk accessories, rolls of luxuriously colored fabrics, and finished products. Prices range anywhere from $150 a yard to $950 a yard. Designers are more than welcome to visit and partake of the magnificence of the shop, but mass manufacturers are not quite so welcome, because this house of artisans is all about exclusivity.

Originally located on the “street of the weavers”, Via de’ Tessitori, this fine workshop has operated continually until the present time. In 1786, the workshop was relocated to its current location at Via Bartolini. Not even the bombs of World War II, which destroyed the roof of the building nor the devastating floodwaters of 1966, could discourage the artisans of silk.

One of the descendants of the founding families, Count Emilio Pucci di Barsento bought a controlling interest in the company after World War II. While he himself became the couturier of modern optical prints, his love of tradition made him commission fabrics for the furnishings of his palace from Antico Setificio. The Pucci Palace, or Palazzo Pucci, was visited by the elite of Europe and the fashion aristocracy. This brought renewed attention to the centuries-old workshop, bringing it more and more illustrious clients.

The water logged equipment at the workshop was restored by Marquis Alessandro Pucci, Emilio Pucci’s son, re-establishing the Antico Setificio Fiorentino back to its purpose and design of creating the most exquisite and delicate of fabrics, including damasks, lampas, brocades, and taffetas. Today, the Antico Setificio Fiorentino is managed by the descendants of Emilio Pucci and continues to work exclusively with the authentic eighteenth century looms. Its silks are prized to this day by the connoisseurs of fine quality fabric—it has successfully carried through the traditions of finery and delicacy of the Florentine nobility in to the twentieth century.

Edited and updated by Damyanti